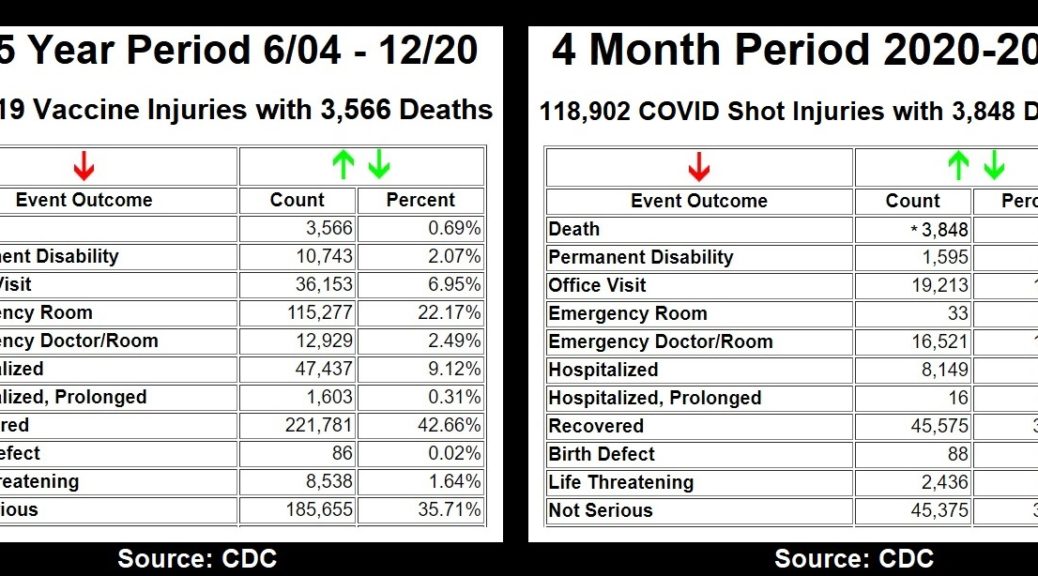 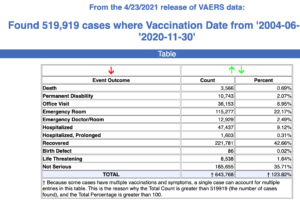 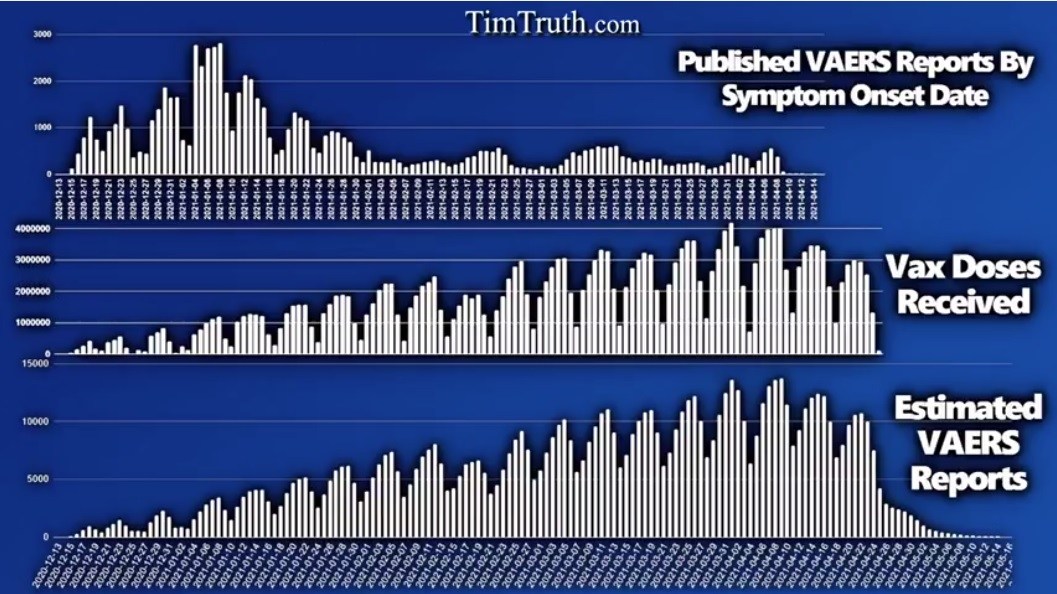 The mass murder of Americans through the experimental COVID injections continues, as the CDC is now reporting that 3,848 people have died and 118,902 adverse reactions have now been logged into their Vaccine Adverse Event Reporting System (VAERS).

Many believe there is solid evidence that the CDC is holding back much of the data, and that the number of deaths and injuries reported is much higher (see below).

This is in addition to the fact that many deaths and injuries following the injections are not even reported, because the propaganda put out by the U.S. Government and reinforced through the pharma-funded corporate media, continues to claim that NONE of these deaths are linked to the COVID injections, and are just “coincidences.”

So those who foolishly believe this and later become sick, or see a loved one die, will not even consider the fact that the COVID injections may have caused this, and will not bother reporting it to the CDC.

To give some perspective to these recorded numbers, and show how criminally evil it is to claim that none of these deaths or injuries are caused by the injections, the total deaths now recorded following experimental COVID injections since December, 2020, is more than the recorded deaths following vaccines for the previous 15 and a half years (source) before the experimental COVID shots were unleashed against the public.

* Deaths following COVID injections were reported by the CDC earlier this week here. Not all of them were included in the Friday data dump published 4/30/21, which showed only 3,544 deaths. The “4 month period” started in early December through April 23, 2021, so it will take about another 2 weeks to get all the data for the full 4-month period, and these numbers will increase.

Tragically, there are now at least 5 deaths recorded among children following COVID injections, including a 5-month-old baby who was not injected, but was breast feeding from her mother who was.

VAERS ID: 1166062: Patient received second dose of Pfizer vaccine on March 17, 2020 while at work. March 18, 2020 her 5 month old breastfed infant developed a rash and within 24 hours was inconsolable, refusing to eat, and developed a fever. Patient brought baby to local ER where assessments were performed, blood analysis revealed elevated liver enzymes. Infant was hospitalized but continued to decline and passed away. Diagnosis of TTP. No known allergies. No new exposures aside from the mother”s vaccination the previous day.

VAERS ID: 1218081 also 1218081: 17-year-old female, Wisconsin. Patient reported difficulty breathing and chest pain; suffered cardiac arrest and death. From Post mortem report from Hospital: when on 4/10/21, she was in the process of self catheterization and began experiencing difficulty breathing and chest pain. Shortly after she collapsed and was not breathing. EMS arrived and found her apneic and in pulseless electrical activity. Resuscitation began and continued upon arrival to the ED. Aside from a short period of returned pulses, she remained in PEA despite an estimated 45-50 minutes of resuscitation. She died at 11:20am on 4/10/21. – Directly from Pathology report 4.12.21

There is also one case of a 17-year-old male in Michigan with a history of mental illness who committed suicide 8 days after being injected. VAERS ID: 1243487.

Children have a virtual ZERO percent chance of dying from COVID-19. So whoever is responsible for having these children injected with an experimental shot when they did not need it should be arrested and charged with murder.

Several people have emailed me this past week with links to videos from those who are doing a deep dive into the VAERS database, and claiming that there is solid evidence that the CDC is withholding data, and that the injuries and deaths following COVID injections are probably very much higher.

I have not had time to verify these reports, but I am going to include two videos here you can watch and listen to for yourselves. Do your own fact checking.

How Far Will this Genocide go?

Many states in the U.S. are now reporting that they have stock piles of COVID doses from the experimental shots that are not being used up as demand for them is now decreasing.

So far, most people in the U.S. who have received these experimental shots have done so voluntarily. The exceptions are children, and those mentally challenged. (See: LA County Sheriff Going Home to Home Forcibly Injecting Handicapped Adults and Children with COVID-19 Shots Against Their Will.)

As many dissenting doctors and scientists have now stated publicly, this is a population control medical endeavor as there are no scientific or medical reasons that can justify unleashing experimental shots on the public.

The people at the top controlling this are evil. They are censoring all other therapies that can be used effectively to fight viruses like this one and the seasonal flu, for the purpose of rolling out these experimental products that we are seeing now affect not only those being injected, but in many cases those who have not been injected as well who come in close proximity to the injected population.

It is entirely possible that all child-bearing females who survive the injections will become infertile and never be able to bear children.

This is genocide: death by injection. It’s time to STOP sanitizing this. We need to start using the correct terms.

The only shots being fired right now are coming from a needle. This country is now occupied by enemy forces, and they basically annexed the U.S. without a fight because a majority of the public complied with their evil plans willingly.

What is coming next as they target the “vaccine hesitant”?

The Constitution of the United States is still in force, and the Second Amendment gives you a legal reason to protect yourself and your family from evil people determined to kill you.

They are the law breakers. If you stand your ground and do whatever is necessary to protect yourself and your family from their intent to kill or seriously harm you, you are acting within the legal rights protected by our Constitution.

Don’t be confused on this point! Because many who are have already been killed, and now they’re coming after the children.

I have had multiple threats on my life already for publishing the truth (by anonymous COWARDS), and I will gladly give up my life to continue publishing the truth as long as I can. So anyone who has ideas of trying to find me and silence me, better be prepared to lose their life too.

Overheard of the Week:

Women in their mid-twenties are walking down 14th street shortly after the CDC released updated mask guidelines:

“I guess I’m vaccinated so I don’t have to wear a mask outside but … I really don’t want people to think I’m a Republican.” 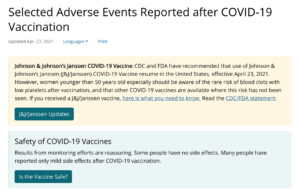 COVID-19 vaccines are safe and effective.

Millions of people in the United States have received COVID-19 vaccines, and these vaccines will undergo the most intensive safety monitoring in U.S. history.

CDC recommends you get a COVID-19 vaccine as soon as you are eligible.

Adverse events described on this page have been reported to the Vaccine Adverse Event Reporting System (VAERS)external icon.

To date, VAERS has not detected patterns in cause of death that would indicate a safety problem with COVID-19 vaccines.

VAERS accepts reports of any adverse event following vaccination, even if it is not clear the vaccine caused the problem.

CDC, FDA, and other federal partners will continue to monitor the safety of the COVID-19 vaccines.

Most of the population believe the official propaganda. It does not take a wizard to debunk it. 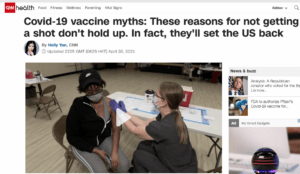 Americans have an easy way to crush Covid-19 — one that would let businesses fully reopen safely, ditch the need for social distancing and restore a mask-free return to normalcy.

But many Americans don’t want to get vaccinated as myths and misunderstandings spread.
“Facebook runs a survey every day … and that’s shown that vaccine confidence in the US has been slowly but steadily going down since February,” said Dr. Christopher Murray, director of the University of Washington’s Institute for Health Metrics and Evaluation.
“We were at 75% of adults saying they wanted the vaccine. Now we’re down to, in those surveys, about 67%.”
That’s a big problem for several reasons:
— Health experts say we need at least 70-85% of the US population immunized to reach herd immunity.
— The longer people stay unvaccinated, the more chances a virus has to mutate. And if the mutations are significant, they could lead to more troubling strains that might evade vaccines.
— ‘Long Covid’ is real. Even young athletes have suffered brain fog, chest pains and shortness of breath months after infection.
“Even for young people who consider their risk of severe Covid to be low, the long-term consequences can be quite serious,” said Dr. Francis Collins, director of the National Institutes of Health.
“So long Covid represents one more reason to encourage everyone age 16 and over to get vaccinated as quickly as possible.”
But rampant myths and unnecessary concerns stand in the way. Here are some of the most popular arguments for not getting vaccinated and why doctors want to set the record straight:

When I tried sharing a screenshot of OFFICIAL EU DATA it was removed from my Facebook account because apparently official EU data violated their “community guidelines”.

It came with a dire warning and I had to go through several stages to make sure I got the message before I could access Facebook.

They DO NOT want this information to get out! 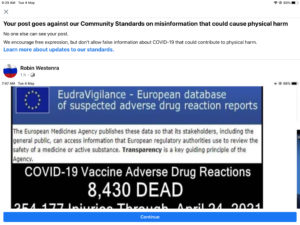 2 thoughts on “United States: More deaths recorded from vaccines than past 15 and a half years”