The
Chinese government has imposed a QUARANTINE of the city of Wuhan,
over the outbreak and spread of a new and deadly coronavirus.

Official
records say more than three-hundred (300) have become infected since
the outbreak started on 31 December, but hospital staff claim more
than one-thousand, seven-hundred (1700) are hospitalized with serious
symptoms.

Anyone
ever remember a city of 11 million placed in quarantine before?

The
amount of news being dumped on this story, so fast, makes many people
think they do not have this contained and are concerned this has
already spread out of control.

Below is
an announcement of a local Wuhan authority, saying that no
one is allowed to leave Wuhan until the outbreak dies out.

Intelligence
sources confirm to the Hal Turner Radio Show that within China, the
virus is literally EXPLODING out of control. “Thousands”
are already sick and the disease is spreading so fast, there’s no way
to handle all the sick people.

Despite
this, the “Official” Chinese report on the situation claims
the following:

As
of Tuesday, 21 January, Thailand, Japan, South Korea, and late in the
day, the United States all confirmed cases: 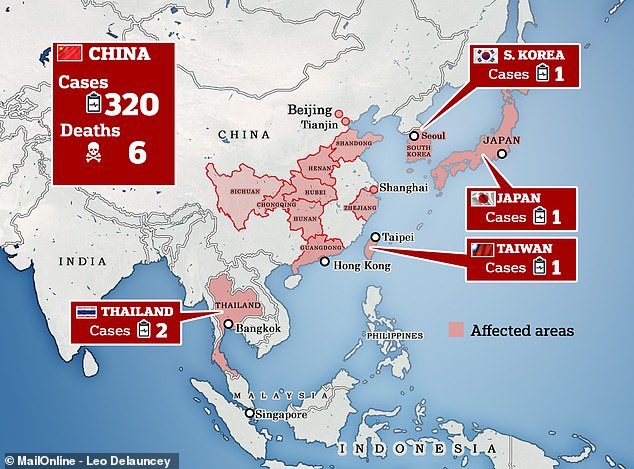 As of Tuesday, 21 January, Thailand, Japan, South Korea, and late in the day, the United States all confirmed cases:

The
deadly new outbreak that started in the mainland Chinese city of
Wuhan has entered the stage of transmission among families and
hospitals, taking it a step closer to a full-blown community
epidemic, a top Hong Kong expert warned on Tuesday.

The
warning came as a study by the University of Hong Kong (HKU)
estimated that the virus had already spread to 20 other mainland
cities from Wuhan in Hubei province between January 1 and 17,
suggesting the situation was worse than officially reported.

In
the USA, a man in his 30’s is confirmed infected in Seattle,
Washington after returning from a trip to Wuhan.  He is
described as “severely ill.”

IT
HAS GONE GLOBAL

The
symptoms of infection are rather common at first: Fever, chills,
cough.  But they swiftly worsen to become life-threatening.
The info-graphic below lays out the symptoms:

China’s
National Health Commission yesterday confirmed that the
never-before-seen SARS-like coronavirus had spread between
humans; And now the body has revealed the unnamed infection is
spread from the lungs and may travel in saliva – such as through
coughs.

Professor
Zhong Nanshan, leader of the National Health Commission’s expert
team, revealed the virus is likely to be spread by saliva in a press
conference today.

He
told the meeting: ‘As of now, it is affirmative that the new strain
of coronavirus can be passed between humans.

‘The
virus is spread through respiratory system and distance of impact is
not long, but it is possible that the virus was passed after being
stuck to saliva.’

Professor
Zhong said officials must ‘quarantine
the patients and stop them from contacting others’. Antibiotics
will not tackle the virus because the drugs only work on bacterial
infections. 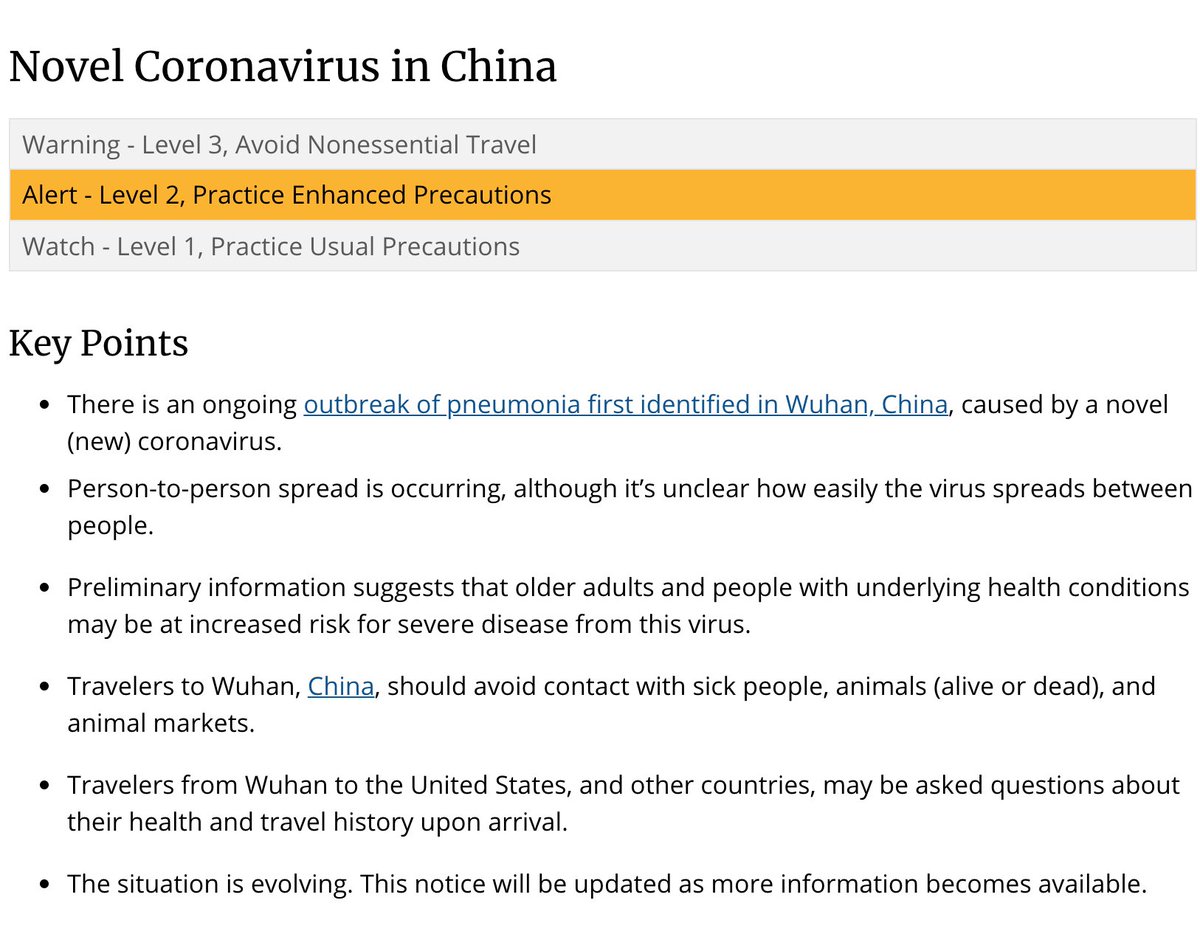 People
in China have been buying filter masks to try protecting themselves
from infection.  SO
MANY PEOPLE HAVE BOUGHT MASKS, THEY ARE SOLD OUT ! ! ! !

Now
that this disease is confirmed here in America, YOU may wish to
purchase these inexpensive masks for yourself or your family BEFORE
THEY SELL OUT HERE TOO.

The
National Institutes of Occupational Safety and Health (NIOSH) rates
masks, and the masks you should get should be rated N-95 or N-100

Links
to sellers on EBAY, who carry these masks are below.   The
Hal Turner Radio Show IS
NOT the
seller.

The
World Health Organization (WHO) is now raising the possibility
of ‘sustained’ human-to-human transmission of new virus
in China.

-International outbreaks of other diseases
such as bird flu viruses or MERS (30% mortality)— Middle Eastern
respiratory syndrome — have been relegated to limited
human-to-human transmission, not sustained transmission.

-“Each
day our new findings are not good,” said Michael Osterholm,
director of the Center for Infectious Diseases Research and Policy at
the University of Minnesota. “This is beginning to look more like
SARS every hour.”

-“That has very important implications
for the response. It becomes much more challenging to control an
outbreak with sustained human-to-human transmission, clearly,” Tom
Inglesby, director of the Johns Hopkins Center for Health Security

Authorities
in Shanghai have already begun spraying what they call “Disinfectant”
into the air along streets in that city ! ! !   Video below
shows the spraying taking place.

When
have you EVER seen –THIS– type of government response to a
virus???? Something is very wrong here; and it seems much worse than
government is letting on. You would do well to grab your family some
filter masks at the links above . . .

HOW
TO PROTECT YOURSELF

Here’s
how you can protect yourself from any virus, even if it is the worst
pandemic killer strain imaginable.

1.
Wash your hands and face often, especially after touching any surface
that anyone else may have touched. Just a few examples: door handles,
money, gasoline pumps, table tops, chairs, everything in a public
restroom, etc, etc.

2.
NEVER touch your hands to your face. Most people have a habit of
doing this a lot and it is, by far, the number one way to catch any
virus including influenza, typical respiratory infections (colds,
bronchitis) and so forth. All you have to do to get infected is touch
anything someone else who is infected touched and then touch your
face and boom, you’re infected.

3.
Many have mentioned colloidal silver, echinacea, goldenseal root,
vitamin C, vitamin D3, apple cider vinegar, etc. These are all
helpful in building up the immune system but are not fail-safe.

4.
Avoid large public venues, especially if they are indoors, such as
arenas, gymnasiums, meeting rooms and the like. This is because you
are gathered with large numbers of other people and it is highly
likely that some of these are infected and contagious. And if they
cough or sneeze, you may well be exposed. Any indoor environment
enhances the risk of contracting a virus by way of aerosol
transmission. In outdoor locations the infecting agent is more likely
to be dispersed before it can reach you.

5.
If a major outbreak is underway in your area, avoid restaurants and
stores if at all possible. If you must go to these places, be acutely
aware of anyone coughing or sneezing or showing signs of infection
and if at all possible, stay as far away from them as you can. Unless
someone coughs or sneezes right on you or very near you, if you can
move away from them quickly it is unlikely you will catch their
infection through aerosol transmission alone.

6.
Finally, if it makes you feel more secure, buy a N100 surgical mask
for when you are out in public.

Do
all of these things and you will reduce your risk of getting infected
by about 98 percent, even during the worst imaginable outbreak or
pandemic. Oftentimes the fear-mongering makes it seem as if you are
helpless and there is nothing you can do to avoid disaster but this
simply is not so. The problem is that the vast majority of people are
either ignorant about how to protect themselves and/or they don’t
make an effort to do so. Others may go into full panic mode in an
extreme situation but this too is of no help whatsoever. You have
more control over your fate than you likely realize