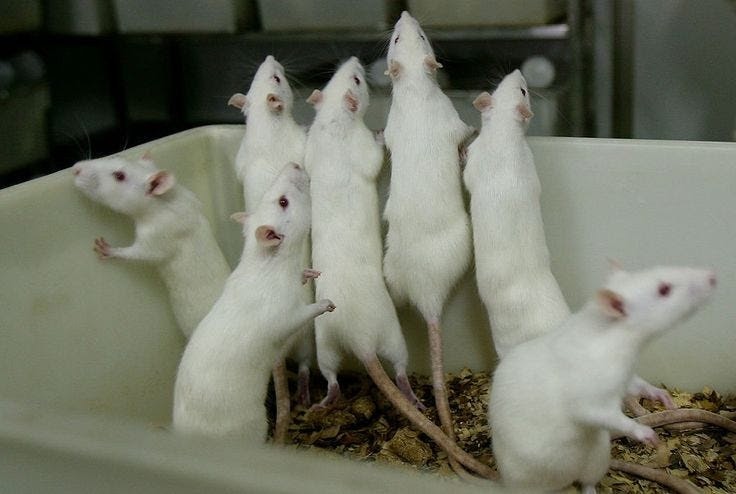 Last week, a day after the FDA authorized the new “Omicron booster” targeting the dominant Omicron BA.5 subvariant, the CDC’s vaccine committee formally recommended the shots for Americans as young as 12. Pfizer’s Omicron boosters will be available for people ages 12 and older, while Moderna’s new shots are for adults ages 18 and older. The new mRNA composition contains two half components of the spike protein: the ancestral virus strain and BA.1 or BA.4/BA.5, which have identical spikes.

The totality of public evidence for this new magical inoculation is detailed by CNBC:

For the BA.4/BA.5 boosters, the companies have submitted animal data. They have not released those data publicly, although at the June FDA meeting, Pfizer presented preliminary findings in eight mice given BA.4/BA.5 vaccines as their third dose. Compared with the mice that received the original vaccine as a booster, the animals showed an increased response to all Omicron variants tested: BA.1, BA.2, BA.2.12.1, BA.4, and BA.5.

Yes, on the basis of “increased response” to Omicron in eight mice, the Biden administration has ordered 171 million doses of the new Pfizer and Moderna boosters. Even had this vaccine been tested in humans and shown some efficacy against infection – like the primary series – there would be more than enough reason for caution and hesitation. The European Medicines Agency has warned against the potential adverse immunological effects of repeated boosting every four months. As Dr. Marty Makary from Johns Hopkins has noted, recent research shows a “reduced immune response against the Omicron strain among people previously infected who then received three Covid vaccine doses compared to a control group that previously had Covid and did not have multiple shots.”

It is just impossible to overstate the unconditional absurdity of the FDA and CDC decision. Not only is the booster merely available to the public (or most rationally, the greatest at-risk in nursing homes) but it is recommended by the state for everyone, including children and teenagers – those with least to gain and most to lose. The regulatory framework that allows them to approve and universally promote the booster is that of the Emergency Use Authorization:

The FDA may authorize unapproved medical products or unapproved uses of approved medical products to be used in an emergency to diagnose, treat, or prevent serious or life-threatening diseases or conditions caused by CBRN [chemical, biological, radiological, and nuclear] threat agents when certain criteria are met, including there are no adequate, approved, and available alternatives.

What these serious “diseases or conditions” might be, which pose such a risk to a healthy 20-year-old that they warrant the use of these criminally under-tested inoculations, is nowhere mentioned. Moreover, rather than observing any kind of remotely defensible dosing schedule, the FDA has recommended the new booster as early as two months after the prior dose. Short vaccination intervals are known to elevate the risk of vaccine myocarditis – another towering and studiously ignored concern.

The most robust research for vaccine-induced myocarditis in young men, who are most at-risk for this adverse reaction, puts the probability at around 1 in 1,800 per second dose. As I’ve previously written, myocarditis is not “mild” and if left undetected, can easily be lethal (read about law enforcement member Dev’s near-death vaccine experience here).

What reassurance can CDC officials give to those concerned with the most documented serious adverse event associated with mRNA vaccination?

CDC official Dr. Sara Oliver: “We know that the myocarditis risk is unknown but anticipate a similar risk to that seen after the monovalent vaccines.”

Anyone who has followed the corruption of the FDA and CDC over the past two years could hardly find these developments surprising. Recall that 12 months ago, two top officials (Dr. Marion Gruber and Dr. Philip Krause) at the FDA’s office of vaccine products resigned over political pressure from the White House to universally authorize the original booster shot to the public. Previously, the Trump administration pressured the FDA to “bend” vaccine emergency use authorization standards and allegedly prevented the collection of safety data prior to the 2020 election.

It’s more than rational to have subzero faith in institutions which are continually rotting on the inside and prone to outside influence from the most powerful political actors in the world. Those still working inside these banana-laboratories attest to their deterioration. On Bari Weiss’s Substack, Dr. Marty Makary and Dr. Tracy Beth Høeg reported stunning, privately obtained quotes from top FDA officials. Here’s a sampling:

“It’s like a horror movie I’m being forced to watch and I can’t close my eyes…people are getting bad advice and we can’t say anything.”

“I can’t tell you how many people at the FDA have told me, ‘I don’t like any of this, but I just need to make it to my retirement.’”

For those who have previously complied with the authoritarian dictates of the government, this may be a great awakening. Do you trust a state-recommended medical intervention based on a 10th grade science experiment on eight mice (all of which got Omicron anyway)? Do you trust an agency which has been under tremendous political pressure, forcing their top vaccine experts to resign and other employees to witness an abject mockery of the scientific method? Do you trust a vaccine that hasn’t even been tested in humans, and will probably never be studied for effectiveness against infection or severe disease because “such trials are very expensive”?

Don’t take my word for it. Listen to Dr. Paul Offit, the most prominent vaccine expert in the U.S and member of the FDA’s vaccine advisory committee (VRBPAC):

Rav Arora is a 21-year-old writer from Vancouver, British Columbia. His work has appeared in such places as the NY Post and The Globe and Mail. Yet his heretical writing on vaccine injuries and mandates has forced him to go independent. Please consider supporting him by becoming a paid subscriber at his Substack, Noble Truths.