Already feeling unwell I feel totally dispirited this morning after the vicious online attack on one of the most beautiful people on the planet, Dr. Vernon Coleman. As a result he has decided to throw in the towel and who could possibly blame him?

The entire world will be the loser. He has selflessly given his all to reveal the truth of the covid-19 plandemic as he sees it in the face of almost unprecedented vicious attacks from the British fascist state and its defenders, He has written a book which he seems to have given the world.

He is not doing this for fame or notoriety but because he has a conscience, something that will be lost on the intellectually, morally and spiritually- deprived generation of the social media age.

You can ruin someone’s life and not think any more of it.

Here is his last video.

Goodbye and Thank You

Dr Vernon Coleman explains why this is his last video. The garbage on Fiona Marie Flanagan’s Twitter was the last straw. (She has allegedly now removed the offensive tweets but screenshots were taken.) Thank you for watching and for all your support and encouragement.

Seeing I had the name of the person, I checked the account. Predictably, this person is a non-believer in the germ theory so thinks the whole idea of a SARS-covid-2 virus is just a scam. How dare Dr. Coleman defend a vaccinologist (sic) !!? 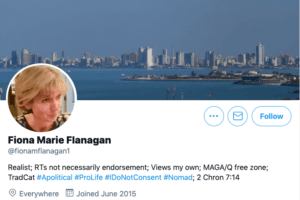 He also put this out on the same day.

Dr Vernon Coleman analyses who is responsible for the dystopian world that is being created. If we don’t move quickly, it’ll be too late

This is the video for which, I believe, he was so viciously attacked, in which he came out with an appreciation of vaccinollogist, Geert vanden Bossche (another person who has put his reputation on this line because, I believe, he has a conscience. Pathetic intellectual and spiritual pygmies who are also moral cowards are totally incapable of arguing with ideas so they jump in with vicious ad-hominem attacks; I have observed this constantly through the ten years I have been about this.

Who needs enemies when you have “friends” One of the people who I believe, without direct proof, that has stabbed Dr. Coleman in the back is broadcaster, Richie Allen.  He used to have Vernon on his show every Monday and referred to him as his friend,  but after the release of the following video has not, to my knowledge even mentioned him.

He does not appear to have had him on the show.

If I am wrong about this I owe Mr Allen an apology. Otherwise…

Dr Coleman says this is the most crucial video he’s ever made about covid-19. Please share this video widely

This is from June last year.

This Couldn’t Possibly Happen. Could it?

Jun 25, 2020
International best-selling author, Dr Vernon Coleman MB ChB DSc FRSA, explains that it has been known for over 50 years that it is possible to control human behaviour with an external transmitter and a receiver inside the body. He investigates the present possibilities.
TRANSCRIPT

The following script was used for a video which I made available on 24th June 2020. If you haven’t seen the video it is, amazingly and much to my surprise, still available on YouTube. It seems timely to make the script available.
VC

I want to start with an extract from a book that was written and published in the UK in 1977. I think you will find it important.

`For over a century, doctors have known that if wires are poked into the brain and an electric charge passed through them, there will be different responses from different parts of the brain. A wire poked into one part will cause a leg to move, the same wire poked into another part of the brain will cause an arm to twitch. Fifty years ago we knew that with the aid of electronic stimulation, doctors could induce pleasure, eradicate pain and recall memories previously lost.’

`With electrodes in position the patient can be controlled quite effectively from a distance. He can be made to eat, to sleep or to work. His appetite, heart rate, body temperature and other factors can also be monitored and controlled.’

`Researchers have shown that gentle cats can be transformed into aggressive beasts if certain parts of their brains are stimulated. In one dramatic experiment, Dr Delgado of the Yale University School of Medicine in America wired a bull with electrodes and then planted himself in the middle of a bullring with a cape and a small radio transmitter. The bull charged but was stopped by Dr Delgado pressing a button on his transmitter. The bull screeched to a halt inches away from Dr Delgado.’

`Dr Delgado reported that `animals with implanted electrodes in their brains have been made to perform a variety of responses with predictable reliability as if they were electronic toys under human control.’

`Similar experiments had even then been performed with human beings. The patients selected had all proved dangerous and had shown that they had uncontrollable tempers.’

And that’s the end of the quote.

I don’t have to get permission to read that extract because it was from my second book which was called Paper Doctors and was published in 1977 by Maurice Temple Smith in London. There are some reviews of the book on my website under the `biography and contact’ button. Incidentally, I gather that a website on the internet has published old email addresses for me. I’m afraid those addresses haven’t worked for ten years so please don’t use them.

Sadly, Paper Doctors has been out of print for years. And for the record I loathed animal experimentation as much then as I do now. I am delighted that the British Government now appears to accept experiments on animals are pointless.

Although I wrote all that in the 1970s, Delgado was working in the 1950s and 1960s and his work was just the beginning of a very complicated story that is only now coming to its final chapters.

Most people – and in that I include most doctors and most scientists – have never heard of Delgado’s experiments and do not realise just how significant they now are.

But it was Delgado, and people like him, who started the long, slow journey towards the control of the human body and human mind.

There have, of course, always been two essentials for controlling people from afar.

First, you need a way to implant some sort of receiver in the human body. Over the years the receivers available have got smaller and smaller. People still think of microchips as being little things you can pick up and hold between your fingers. The sort of thing you might find in a mobile phone for example.

But some microchips are now way, way smaller than that.

The second necessity is for a transmitter.

And that’s not difficult at all. You need a tall post of some kind, a flagpole or a tall building, or a pylon of some kind, and then you stick your transmitter on the top so that it can send its messages out over a wide area. That bit’s easy. Something like a radio transmitter. Or, I suppose, like those things that send signals to mobile phones. It would have to be a bit more sophisticated than the old mobile phone signals, of course.

So, that’s all the equipment you need.

A little chip in the body of the person you want to control.

And a transmitter to send messages.

If you were a mad doctor and you wanted to control an individual it would be a doddle.

You’d just tell them you were giving them an injection to protect them against the flu or something like that and in the syringe there would be a little receiver. And then you’d stick a transmitter on the roof of the house across the road from where they lived.

Remember, that’s what Dr Delgado was doing over half a century ago. It’s nothing new.

Of course, if you wanted to do the same thing for lots of people you’d need a whole lot of people to help you.

If you wanted to do this you’d need someone very rich to start with. Someone with loads of money and contacts. A billionaire really. And someone without much in the way of morals.

And you’d need something to inject into people. A medicine of some kind for example.

And then you’d need someone good at software to help with all the transmitting and the receiving, and you’d need people with access to lots of tall poles or roofs where they could put the transmitter things.

But none of that would be any good unless you had a reason for injecting people. You can’t just go around injecting millions of people for no reason.

Ideally, you’d need them all to be frightened of something so that they were keen to let you inject them. And then you could put your tiny receivers into the stuff that was being injected. Or squirted up their noses or whatever.

But that would be the tricky thing to organise because you’d ideally need a threat of some kind.

You could tell everyone that they were going to get the plague or something if they didn’t let you give them their wonderful antidote.

But for that you’d need to have a really big scare about something.

And that wouldn’t be possible because you’d need some experts to say that there was a big scare coming when really there wasn’t. So they’d have to make up something or find something and then exaggerate it. Or you find someone not very good at what they did and get them to make a forecast that terrified the life out of everyone.

And then you’d have to keep people really scared.

You could, I suppose, make them so scared that they were happy to put up with all sorts of rules and restrictions. And you could tell people that if they didn’t do what you told them to do then the scary thing was going to get worse than ever.

And you’d need experts and advisers who had links to the companies making the stuff you were planning to give people. And you’d have to promise them all sorts of things. And you’d probably need some greedy and compliant politicians too.

So it really wouldn’t be possible to arrange all that.

And anyway there’s another problem because you would need to keep people separated so that you could make sure the messages you were transmitting reached the individual receivers. You’d have to have people standing several feet apart all the time and there’s no way that people would do that.

So it couldn’t possibly work, could it?

Even if that’s what someone wanted to do.

You can read his e-book, Covid-19: The Greatest Hoax in History HERE

All of this reminds me of when I shared a video by Dr. Catherine Horton and Bill Binney describing how they had been under constant electromagnetic attack (torture, even) with another self-described victim.

The person came back on Twitter saying Dr. Horton is a “perp”. But then almost every line uttered by the woman is an attack on someone or other.

I run from such people like from the Plague.

Dr. Vernon Coleman is one of the most impressive people I have come across in the last year and I wish him all the best and a recovery from the pain that has been caused to him.

2 thoughts on “A vicious attack on Dr. Vernon Coleman – he says goodbye”