Because it is so important and another part of the movement downwards I am posting this seperately.

‘It’s going to hurt more than anybody thinks it ever could’: Dire economic prediction issued

People must look at all their financial assets right now and say “I want to sell them or preserve them,” as they’re going to go down in value in the coming years, says Harry Dent the Founder of HS Dent Investment Management.
“Real estate, stocks, everything but the most conservative government, Australian and US Treasury Bonds, are going to go down to reality and it’s going to hurt more than anybody thinks it ever could”. “And nobody thinks it could happen and I’m the only guy on earth saying it,” Mr Dent told Sky News host Chris Smith.
“Once you get bubbles of this extent, there’s no way to stop it, they have to come down to reality”.
“I’m telling you, it’s 30 to 50 per cent for real estate in most countries and it’s 60 to 90 per cent in stocks in most countries.
“This is going to kill most people’s retirement portfolios. “And there’s nothing they can do about it … I’m telling you it’s coming in the next two-to-three-years.
“And I think it’s about to start in the next month or two.” 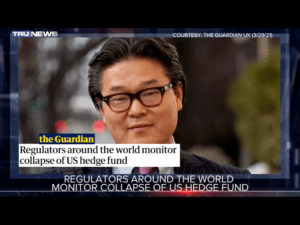 Financial regulators across the world are monitoring the collapse of the New York-based billionaire Bill Hwang’s personal hedge fund.

The sudden liquidation of Hwang’s Archegos Capital Management sparked a fire sale of more than $20bn assets that has left some of the world’s biggest investment banks nursing billions of dollars of losses.

The US Securities and Exchange Commission on Monday said it had been “monitoring the situation and communicating with market participants since last week” as panic spreads about the possible scale of the fallout from the forced liquidation of Hwang’s Archegos fund.

The investment banks Nomura and Credit Suisse on Monday warned investors that they are facing huge losses from their exposure to Archegos. Shares in Japan’s Nomura dropped 16% and Credit Suisse dropped 14% as analysts speculated on just how much money they could lose.

Nomura, which is Japan’s largest investment bank, warned it faced a possible $2bn loss. Credit Suisse said its losses would be “highly significant and material” but did not put a figure on it. The Financial Times said the Swiss bank could faces losses as high as $4bn. Credit Suisse declined to comment on any estimate. 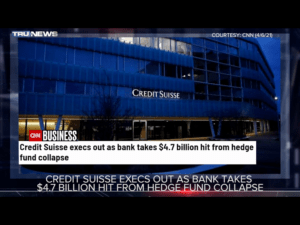 The Swiss bank said Tuesday that it was likely to report a pretax loss of 900 million Swiss francs ($959 million) for the first quarter of this year after taking a charge of 4.4 billion Swiss francs ($4.7 billion) in respect of the failure of Archegos.
“The significant loss … relating to the failure of a US-based hedge fund is unacceptable,” CEO Thomas Gottstein said in a statement. “Serious lessons will be learned. Credit Suisse remains a formidable institution with a rich history.”
Credit Suisse (CS) said that its top investment banker Brian Chin and chief risk officer Lara Warner would both be leaving the bank. Other members of the executive board will not receive bonuses for 2020, and board chairman Urs Rohner will give up 1.5 million Swiss francs ($1.6 million) in compensation.
Credit Suisse also said it would slash its dividend and suspend share buybacks.
Archegos used borrowed money to build massive positions in stocks including media companies ViacomCBS (VIACA) and Discovery (DISCA), and was unable to pay back lenders when share prices dropped.
The implosion of the hedge fund, which managed the fortune of investor Bill Hwang, has triggered calls for increased regulation of US firms that invest on behalf of families or a small number of clients. Japan’s Nomura (NMR) was also among the banks exposed to losses when Archegos collapsed. It has warned of losses of up to $2 billion. Another Japanese lender, Mitsubishi UFJ Securities (MBFJF), is expecting a loss of about $300 million.
“We need transparency and strong oversight to ensure that the next hedge fund blowup doesn’t take the economy down with it,” Democratic Sen. Elizabeth Warren said in a statement last month. 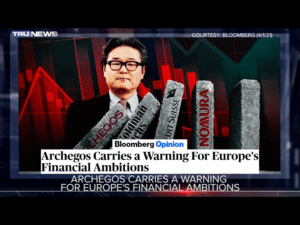 You can almost hear the relief in Brussels that the latest financial crisis, the blowup of Bill Hwang’s family office Archegos, has passed it by. That doesn’t mean the next one will.

The European Union is eager to take work from the City of London after Brexit, but it needs to appreciate that greater exposure to the financial sector means bigger risks. Europe’s approach of setting up finance hubs in several locations will magnify the dangers rather than prevent them.

As with the 2008 Lehman Brothers collapse, the splintered approach to trying to manage the massive margin call on Archegos made matters worse. Deutsche Bank AG dodged this bullet (mimicking Goldman Sachs Group Inc. and others) by a swift disposal of $4 billion of available-for-sale collateral from its prime brokerage exposure to Hwang. Credit Suisse Group AG and Nomura Holdings Inc. were less fortunate. Two of Japan’s megabanks have also revealed exposure. The collateral they hold may now both be much lower in value and less liquid, taking much longer to offload, with commensurate larger losses.

The scale of the Archegos blowup looks manageable for the finance system, even if does leave a few bank victims, but imagine something similar happening in the infinitely bigger interest-rate market at some point. And then imagine clearing houses in different European cities trying to manage the fallout collectively. 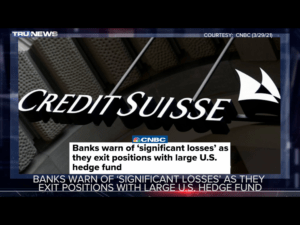 Credit Suisse and Nomura warned Monday of “significant” hits to first-quarter results, after they began exiting positions with a large U.S. hedge fund that defaulted on margin calls last week.

While neither Credit Suisse nor Nomura named the fund, it’s been widely reported that Archegos Capital Management is the firm connected to the fire sale.

In a trading update before the market open, Credit Suisse said a number of other banks were also affected and had begun exiting their positions with the unnamed firm. The Zurich-based lender’s shares closed down nearly 14% on Monday following the announcement.

“While at this time it is premature to quantify the exact size of the loss resulting from this exit, it could be highly significant and material to our first quarter results, notwithstanding the positive trends announced in our trading statement earlier this month,” Credit Suisse said. It added that it would provide a further update on the matter “in due course.”

A margin call occurs when a broker demands that an investor deposits more money into a margin account, which enables them to invest money borrowed from the broker, to bring it to a minimum required amount. The investor then has to either deposit into the account, or sell some of the assets held in it.

Nomura also issued a trading update on Monday warning of a “significant loss” at one of its U.S. subsidiaries resulting from transactions with a client stateside. Japan’s largest investment bank said it was evaluating the potential extent of the loss, estimated at $2 billion. Its shares fell more than 16% on Monday.

The Bear Traps Report founder Larry McDonald argues President Biden’s infrastructure plan will force the Fed into ‘yield curve control’ by the third or fourth quarter to ‘suppress yields and hold them down,’ which weakens the dollar and ‘gives you a boom for commodities.’

“If all else fails, they take you to war” 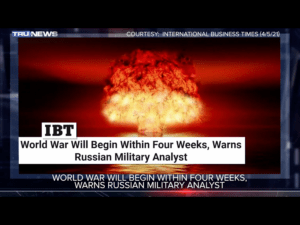