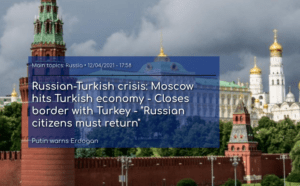 “Door” in front of Tsavousoglu was thrown by Moscow, which announced that it is closing the border with Turkey and suspending all flights to Ankara until June 1, a sign of dissatisfaction with the Ukrainian issue and Ankara’s involvement.

Russian analysts say that although the official excuse is COVID, it is a minor issue.

It is, in essence, a purely aggressive move by Moscow following the Erdogan-Zelensky meeting.

Russia is using the paper of the economy to bring Erdogan and Turkey back on the path it wants in relation to the Ukrainian one. It is no coincidence that Lavrov has previously publicly warned Turkey.

It is noteworthy that the Russian decision was made while the Turkish Foreign Minister was in Moscow for talks.

In fact, Russia extended the date and from May 15 to June 1, with the result that Ankara lost a huge number of Russian tourists and of course foreign exchange.

Putin’s deadly warning to Erdogan: “You will pay a heavy price if a NATO Fleet comes” – Russia closes the border with Turkey!

Russia has suspended flights to Turkey

Deputy Prime Minister Tatyana Golikova recently announced that ” Russia is suspending all regular flights and charter flights to Turkey from April 15 to June 1.

We have made a decision to restrict both regular and charter flights from Russia to Turkey and vice versa. The interruption starts on April 15 and will continue until June 1

The only exception will be the flights that will be organized for the return of Russian citizens to the territory of Russia, for the construction of the Akuyu nuclear reactor.

I advise “tour operators” to stop selling tour packages for these dates.

Lavrov to Erdogan: Don’t even think about it

As we mentioned a while ago, Sergei Lavrov was a bulwark against Turkey because of the promises made by Erdogan to his Ukrainian counterpart Zelensky, one of which was the additional sale of Turkish drones in Ukraine.

“We immediately urge all countries that have communication, including Turkey, to analyze the situation and the regime’s unrestrained militaristic statements in Kiev.

We warn them not to feed these militaristic sentiments. “

Earlier, Turkey was heavily criticized for the Erdogan-Zelensky deal.

“A new outside player has been actively involved in the escalating conflict in Donbass. This player is Turkey where the Ukrainian president went there on Saturday.

The two discussed military agreements while Zelensky’s arrival coincided with a meeting of the High-Level Strategic Cooperation Council.

The Ukrainian president found support in almost all key issues for him while a “Free Trade Zone” and the “Crimean Platform” were announced for its return to Ukraine.

Some agree with Erdogan-Putin, others say Kalin

In addition, Ukraine’s membership in NATO was discussed and President Erdogan stated that “these problems can be resolved peacefully.”

After the discussion with Zelensky, his adviser J. Kalin stated that “Turkey supports the territorial integrity of Ukraine and is in favor of protecting the rights of the Crimean Tatars and resolving the Russia-Ukraine dispute through negotiations.”

But in the Zelensky-Erdogan talks, they talked about Ukraine’s rearmament, with Erdogan saying “that defense cooperation is not directed against third countries” (as noted by WarNews247).

The Ukrainian Foreign Minister Andriy Taran, who was also in Istanbul and met with his Turkish counterpart Akar, discussed a number of defense contracts.

They talked about Turkish corvettes, Bayraktar, ammunition. They also talked about cooperation in other defense projects.

“Immediately after that, Russia closes its borders with Turkey.”

Somehow, Turkey and Erdogan figure big in this story
Ultimatum in Turkey for the Mediterranean Sea – Cyprus via Britain: “The NATO center goes to Varna and you will fight against the Russians”!

An important article in the Turkish media connects the visit of Turkish Defense Minister H. Akar to Britain with an ultimatum delivered to Erdogan concerning the Black Sea and Cyprus.

In essence, the Turks say that the British Minister of Defense handed over a kind of ultimatum to his Turkish counterpart, Akar, on two important issues that must be met immediately by Ankara and Erdogan.

In fact, they report that Turkey is directly threatened with the PKK if it does not comply.

The first is the transfer of the “NATO Black Sea Center” from Britain to Varna, Bulgaria and its support with Turkish warships and Turkish soldiers.

In essence, this is an American ultimatum calling on Turkey to take an immediate stand and man the NATO Center in the Black Sea against Russia.

This is extremely important information that explains the widespread Russian attacks and interventions against Erdogan.

It comes at a time when the Turkey-Ukraine Strategic Council has taken place.

In any case, it seems that Turkey is with its back to the wall and should immediately fully clarify its position in view of military operations in Ukraine.

The second issue is the withdrawal of Britain as a guarantor power from the Cyprus issue and the recognition of the state of Cyprus by Turkey.

And the second point is very important as the British essentially say to Erdogan “recognize Cyprus to enter the issue of deposits and leave the Turkish Stream”.

Everything shows that Lavrov’s public attack had a cause.

Let’s look at parts of the article

Second anti-US report to Erdogan: “Stay away from conflict in Ukraine – The stakes are much higher”

“Is all this a coincidence?

Retired Admirals are currently in custody with exceptional sensitivity and knowledge not only about the Montreux Treaty but also about Aegean-Mediterranean-Cyprus issues.

These are the same people who had hidden that there is an “Additional Protocol”, something that Greece reminded us (they mean the Cyprus Recognition Protocol).

For a week on the agenda of the discussions was the statement of the retired Admirals. It turned out to be just an “announcement” and not a “Declaration”. The draft had been leaked and changed. It was originally to be published on April 6 and not at midnight on April 3 to 4

As the country is saved from a new coup attempt, US warships return to the Black Sea to support Ukraine in tensions with Russia.

Coincidentally, a statement from the retired Admirals about the Treaty of Montreux appeared.

The US notified us 15 days ago. And suddenly the retired Admirals appeared.

The coincidence with Britain

Let’s look at another coincidence: While the Nation is in trouble with the “Ankara coup”, Defense Minister H. Akar went to Britain at the invitation of his British counterpart.

According to the Turkish statement, co-operation on bilateral, regional and defense issues was announced during the visit.

The following issues were discussed during the two-day visit:

“There was an exchange of views on bilateral and regional issues, especially on developments in NATO, Afghanistan, the Eastern Mediterranean and the Black Sea. Both defense ministers confirmed that they have identical views on many issues and agreed that joint efforts would benefit NATO’s interests.

In addition, possible defense co-operation efforts were discussed. We agreed to intensify the fight against the PKK terrorist organization. “Britain has taken some steps but that is not enough.”

According to the British announcement:

“The British Foreign Secretary and Akar confirmed the close cooperation in defense and security between Britain and Turkey.

In addition, it was agreed that the two countries would work to support the fight against ISIS. “

But in the British announcement there is no mention of a fight against the PKK-FETO. There is only one battle against ISIS.

Britain is closely linked to ISIS, which is trying to retake several areas in Iraq and Mosul.

Is this a warning against us?

At the heart of Britain is the Black Sea

But Britain had two other areas on the agenda: The first is the Black Sea.

Efforts have been underway for years to move the Center to Bulgaria.

One of the main topics of discussion between the NATO Secretary General and the Prime Minister of Bulgaria in 2019 was “the NATO presence in the Black Sea and the development of the NATO Center in Varna”.

Conflict No. 5: Invocation of Article 15 from Kiev and Extraordinary Summit NATO – Russia: “Ukraine will have a bad end – Turkey should be very careful”

Cyprus and the Recognition Protocol

The second country on the agenda was Cyprus: Britain is a guarantor country in Cyprus.

The wish not only of Greece but also of the USA, EU, Russia is this system that they now call “obsolete” to be dissolved and the “Turkish Occupation Army” to leave.

In the negotiations that had taken place in previous years, Britain and Greece had agreed to withdraw from guarantor powers.

As you know, the negotiations on the Cyprus issue start in Geneva at the end of the month.

Did they talk about the negotiations on the Cyprus issue?

Why is the Greek Foreign Minister coming?

The “Cyprus Protocol” is on the agenda

As you know, after the issue with the retired Admirals, there was the incident with Charles Michel and Ursula von der Leyen in Ankara.

On the agenda was the Customs Union and the issue of visas. A little later we learned that “the EU has offered more money for the Syrian refugees”

So what will be discussed now?

The only issue that remains on the agenda is the ” Recognition of the state of Cyprus with the Additional Protocol” which has never been signed, ratified or implemented by Turkey since 2004 ″.

Ankara should choose and respond immediately.

Announcement by the Foreign Minister of Canada

Canada recently announced the cancellation of all licenses for the export of defense equipment to Turkey. We are essentially talking about imposing an embargo.

Canada justified the decision by accusing Ankara of using Canadian weapons in the Nagorno-Karabakh conflict.