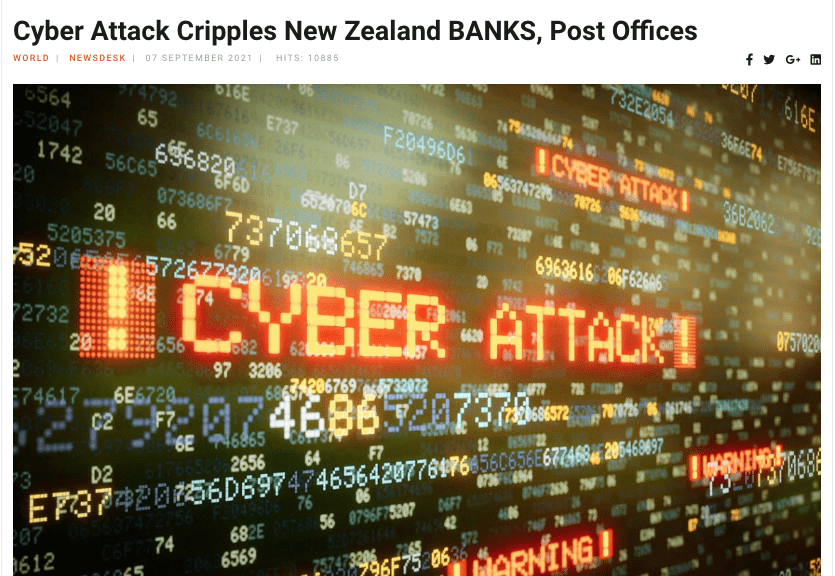 We can say only so much about the dangers of face masks or even what might be in the death jabs.

However, we need to keep ahead of the curve to identify what is coming next.

Yesterday I found the following from Hal Turner.

A cyber attack is being blamed for almost complete failure of major banking web sites in New Zealand today.

Government Cyber Security agency “Cert NZ” said it was aware of a distributed denial of service (DDoS) attack targeting a number of organizations.

“We are monitoring the situation and are working with affected parties where we can.”

Hundreds of users began reporting problems accessing the online services of ANZ, Kiwibank and NZ Post from shortly before 9am on Wednesday.

ANZ Bank, KiwiBank and New Zealand Post all suffered outages.  Banking customers were unable to access account information or even get to the bank web sites.

Remember the World Economic Forum (WEF) held a simulation several months ago, which practices how authorities and industry might respond to a “massive cyber attack” and when reporting about that “exercise” the Hal Turner Radio Show reminded listeners “these exercises often turn out to be real shortly after.”

At least two years ago, word was passed on the Internet that if people heard about a cyber attack against BANKS starting in mid-week, and getting worse by Friday, some people suspected troops would be quietly deployed over the weekend and a Bank Holiday would be declared the following Monday, cutting off everyone’s access to money and credit.  That “Bank Holiday would then be extended for  . . . who knows how long.

The people passing that information along at the time said, “If you hear about Banks being under cyber attack, late in a business week, and it gets worse toward the end of the week, that is your 48 hours notice that Martial Law is coming, and everyone should BUG OUT to their fallback locations because movement would likely not be possible once Martial Law went into effect.”

We should all watch this situation closely to see if the attacks “spread” to other banks and/or other countries today and into later this week.   If they do, you should read between the lines, get cash out of the bank to have (just in case) and prepare to bug out.

Just after 11:00 PM tonight, even I went to my bank and withdrew the max I was allowed to at an ATM.   I did it before midnight, so I can do it again later on Wednesday if I see this crap spreading.  So I’m not just cautioning you, I’m taking my own advice!

Remember, if the banks get taken out, its to cover for economic collapse until they put troops in-place to control everyone.  Having CASH MONEY will be the only possible help because credit/debit will all be unavailable.  Cash will be king and those without . . .  will have nothing.

Keep your vehicles gassed-up and in good repair. PAY ATTENTION to what’s taking place so you aren’t caught off-guard.

If it becomes necessary, based on “the writing on the wall”, to bug out, do not hesitate to go.  He who hesitates will be lost.

If you’re wrong, you can always come back.  You can always put the cash back in the bank.   But if you get this wrong and get trapped, without cash or gasoline or food, you’re done.

I had already noticed that my banking app was down ALL DAY.

The fact that the NZ media totally downplayed the event made me anxious.

Now, I wake up and check my app and it is DOWN for the second day!

There was very little on NZ media 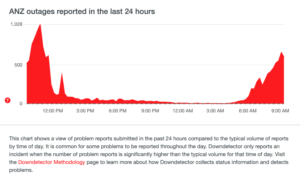 Coverage, such as it is has been along the lines of “what you (little Hobbits) need to know” setting our minds at rest.

It could seem like there’s a new one every five minutes, but what actually is a DDoS attack?

In the past week, New Zealand has seen two major DDos attacks this week affecting NZ Post, Kiwibank, Metservice and others and last week a number of internet service providers. The headline “company disrupted by DDoS attack” has become very common in the past few months. So what actually is it?

First things first, a DoS attack is a Denial of Service attack. The intent is to make a network or website or other computer service unavailable to its intended users, by overwhelming its ability to process the requests. DDoS is when those requests come from distributed sources – or lots of different places.

Radio NZ does say it could be “just the start of the campaign”.

Going back 18 months when we had the first outbreak of what was then “the novel coronavirus” the narrative was similar – all downplayed and “nothing to worry about”.

Seeing the lamestream media won’t give you the truth it is up to us to speculate what could be behind this.

This was a couple of months ago in international media.

That was a couple of months ago, roughly corresponding with the World Economic Forum’s Cyber Polygon. We would be absolute fools not to take psychopath Klaus Schwab’s words seriously.

The fact that a banking app is down for a second day COULD mean that the banks are negotiating with international criminals. However, I think it is more reasonable to take Mr. Schwab at his word and make the appropriate conclusion which could be something like this. 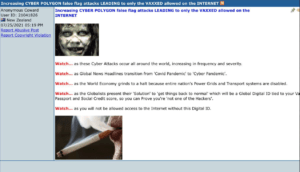 I am no taking anything for granted but plan to have plenty of cash available.