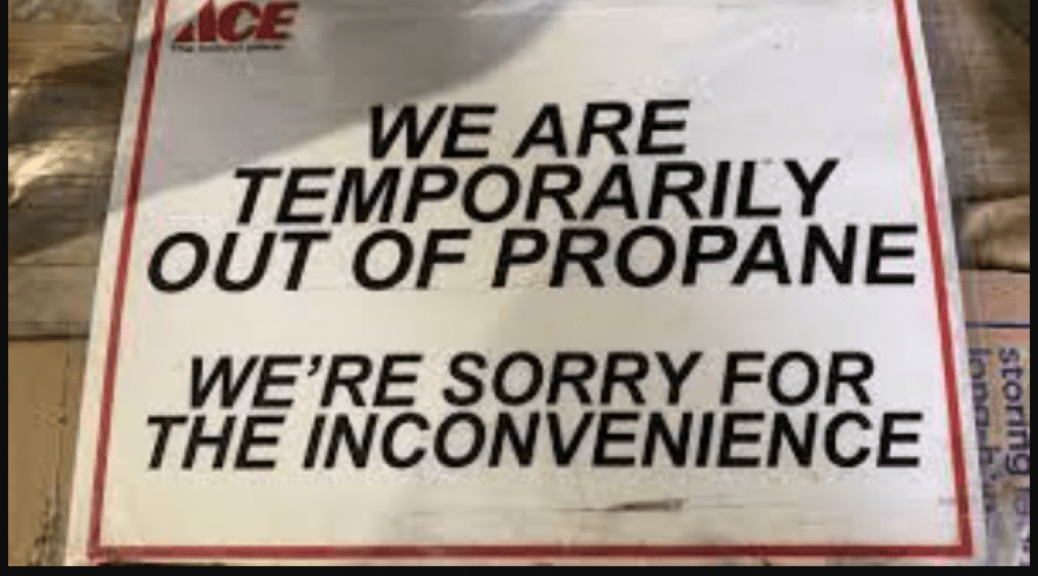 We are potentially heading into the most painful global energy crisis in modern history. Shortages and OUTAGES of Propane could make it impossible to heat rural homes this winter!   Top-off your LNG and get extra capacity or stock up on fire wood, NOW, before the outages hit.

This week, CNN asked Blackstone CEO Stephen Schwarzman about coming energy problems and he openly admitted that we are “going to end up with a real shortage of energy”…

Schwarzman warned Tuesday that high energy prices will likely set off social unrest around the world.

“We’re going to end up with a real shortage of energy. And when you have a shortage, it’s going to cost more. And it’s probably going to cost a lot more,” the private-equity billionaire told CNN International’s Richard Quest at a conference in Saudi Arabia.

According to Schwarzman, we will soon see “very unhappy people” all over the globe…

“You’re going to get very unhappy people around the world in the emerging markets in particular but in the developed world,” Schwarzman said at the Future Investment Initiative. “What happens then, Richard, is you’ve got real unrest. This challenges the political system and it’s all utterly unnecessary.”

Sadly, he is right that this global energy crisis did not have to happen.

If the global elite had continued to fund traditional energy projects at the pace that was needed, we could have avoided this nightmare to a very large degree.  But banks and investment firms that traditionally handle the gigantic lending needed to build power plants, are now reluctant to fund anything that would emit carbon from fossil fuels.  Environmentalism is now causing a shortage of electric generating capacity, which has become so insufficient, that one billionaire is saying we can now look forward to blackouts in winter time because they cannot generate enough electric anymore.

Meanwhile, prices throughout our economic system continue to rise at a very alarming pace. Just check out what has been happening to the price of turkey…

Overall, we are being told that this upcoming Thanksgiving will be the most expensive Thanksgiving that any of us have ever experienced.

Matthew McClure paid 20% more this month than he did last year for the 25 pasture-raised turkeys he plans to roast at the Hive, the Bentonville, Arkansas, restaurant where he is the executive chef.

Norman Brown, director of sweet-potato sales for Wada Farms in Raleigh, North Carolina, is paying truckers nearly twice as much as usual to haul the crop to other parts of the country.

“I never seen anything like it, and I’ve been running sweet potatoes for 38 or 39 years,” Brown said. “I don’t know what the answer is, but in the end it’s all going to get passed on to the consumer.”

Unfortunately, more price hikes are on the horizon.

In fact, Kimberly-Clark Corporation is openly warning that they are going to be boosting prices even higher.

So stock up on paper products while you still can.

Most reader already know the price of gasoline has gone up every day for the past 22 days.

The main reason why prices are skyrocketing is because supplies are starting to get really tight.  In fact, it is being reported that the crude oil hub in Cushing, Oklahoma could be “effectively out of crude” in just a few weeks…

In a note predicting the near-term dynamics of the oil market, JPMorgan’s commodity Natasha Kaneva writes that in a world of pervasive nat gas and coal shortages which are forcing the power sector to increasingly turn to oil (boosting demand by 750bkd during winter and drawing inventory by 2.1mmb/d in Nov and Dec), Cushing oil storage – which just dropped to 31.2mm barrels, the lowest since 2018…

… may be just weeks from being “effectively out of crude.” The bank’s conclusion: “if nothing were to change in the Cushing balance over the next two months, we might expect front WTI spreads to spike to record highs—a “super backwardation” scenario.”

Needless to say, we have never seen anything like this happen before.

In such a scenario, how high could the price of oil potentially go?

And if oil price records are being shattered in the months ahead, what will ordinary Americans have to pay when they go to fill up their vehicles?

Meanwhile, one expert recently told Bloomberg that we could soon be facing “propane-market Armageddon”…

In the report by Bloomberg, Ang says prices for the first quarter of 2022 are already far above later supplies, saying, “it may indicate players are preparing for propane-market armageddon.” He added that some areas could see outright shortages before winter ends.

To add to the stress, Poynter says some weather forecasts are already calling for a colder than normal winter, thanks to the La Nina effect. Experts call for an 87% chance of the system bringing an early and harsh winter season.

The use of the term “outright shortages” is alarming because there are millions of Americans that use propane to heat their homes.

If the propane runs out in the middle of the winter, what are those people supposed to do?

On the other side of the globe, a tightening of natural gas supplies has become an enormous problem.  According to Global News, natural gas prices in Europe and Asia “have more than tripled” in 2021…

Regional natural gas markets in the United States are seeing prices for this winter surge along with global record highs — suggesting that the energy bills causing headaches in Europe and Asia will hit the world’s top gas producer before long.

Gas prices in Europe and Asia have more than tripled this year, causing manufacturers to curtail activity from Spain to Britain and sparking power crises in China.

Readers who heat their homes with LNG/Propane should top-off their supply while prices are lower and maybe even ask their supplier if they can ADD TANKS to their existing system, to hold more gas than usual.

A typical rural home has either three 150 gallon tanks (450 gal), or one 500 gallon tank to hold gas.  But the suppliers cannot fill the tanks all the way, they have to leave room for gas expansion, so they generally fill those tanks to 80%.

For a three tank (450 gal) home, that leaves you with only 360 actual gallons.  That gas is **TYPICALLY** usually used up at a rate of about 250 gallons per month in winter.  So a typical rural home has only slightly more than ONE MONTH supply of gas in the dead of winter.  If you ask your supplier to add another 150 gallon tank, that brings you up to 600 gallon capacity, at 80% full leaves you with 480 actual gallons, which is more like TWO months supply.

Given what we’re being told about possible OUTAGES, it may be a smart move to ask your supplier for more capacity NOW, rather than hope they still have gas to sell in the dead of Winter.

Now, maybe your supplier will NOT give you extra tanks.  Maybe you can buy your own, but you have to ask the supplier if he will actually FILL tanks that YOU own.  Many will not.

Absent extra fuel capacity, and conservation efforts, maybe you will be forced into using fire wood.  Many rural homes have fireplaces and/or wood burning stoves.   Get an extra cord of firewood, above and beyond what you would normally use over a winter.

Yes, it will cost you about $300 but what choice do you have?   If the gas runs out and cannot be refilled, you have to have heat.  If you end up relying on fireplaces and wood burning stoves for heat, you’re gonna need a lot more wood.  Better to get it NOW, before everyone else is trying to get theirs too.

In addition to a lack of natural gas, a severe coal shortage has also contributed to the economic chaos that we are witnessing in China at the moment.

Power shortages have spread to 20 provinces in recent weeks, forcing the government to ration electricity during peak hours and some factories to suspend production. These disruptions resulted in a sharp drop in industrial output last month and weighed on the outlook for China’s economy.

India is being hit really hard by the global coal shortage as well.

In fact, we are being told that most of India’s coal plants “have critically low levels of coal inventory”…

Most of India’s coal-fired power plants have critically low levels of coal inventory at a time when the economy is picking up and fueling electricity demand.

Coal accounts for around 70% of India’s electricity generation.

The shortages aren’t something that we have to wait for.  They are already here, and they are going to get a lot worse.

Of course this new energy crisis is going to make our global supply chain headaches even more frustrating.

In our economic system, it takes energy to literally do just about anything, and as energy becomes more expensive virtually every form of economic activity will also become more expensive.

That means that all of the stuff that is made for us in Asia and shipped halfway around the planet is going to start costing a lot more.

As toy shortages intensify heading into the holiday season, we are already seeing some resellers pricing toys at nearly 400 percent of their normal levels…

American Girl’s sold-out blonde winter princess doll, which retailed for $250, is now going for up to $999 on platforms such as Mercari and eBay.

The cat-themed Gabby’s Dollhouse, which is all the rage for this year’s preschoolers, has nearly quadrupled on some sites from its original $55 price tag.

This is the “new normal”, and so you might as well get used to it.

I am shocked that things have deteriorated so rapidly, and this new global energy crisis is definitely setting the stage for so many things that I have been warning about.

As global energy supplies get tighter and tighter, all of us will feel the pain.

And the experts are telling us that things are not going to turn around any time soon.

In case you haven’t figured it out yet, inflation is eventually going to get far worse than what we witnessed during the 1970s.

At this point, even many top Democrats are warning that high inflation is with us to stay.

Yes, all of this is really happening.

This is not a drill.

We are in the early chapters of a full-blown economic meltdown of epic proportions, and nothing will ever be the same after this.

If you want to keep waiting for conditions to “return to normal”, you are going to be waiting for a really, really long time.

We have entered a truly horrible nightmare, and there will be no waking up from this.