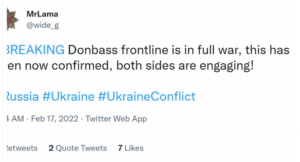 At about 2:30 AM eastern US time on Thursday, shelling and mortar fire from Ukraine forces began hitting both Donetsk and Luhansk.   Ukraine is seven hours AHEAD of U.S. eastern time, so the shelling began around 7:30 PM Wednesday night on the US east Coast time zone.

Reports, mostly from social media, indicate heavy fighting by both sides along what is called the “Line of Contact” between the militias of Luhansk/Donetsk, and the Ukrainian Army.

For much of the early morning hours Thursday since the shelling began, Ukraine has flatly denied firing on either Luhansk or Donetsk.  Ukraine has repeatedly said they are not engaging.   Yet numerous videos from civilian homes in the area, with the clear sounds of shells flying overhead, and of mortars or artillery shells exploding in the distance, and undeniable proof that __ someone __ is attacking.

Mutual accusations about the attack …

An eyewitness said bombings were heard Thursday (February 17, 2022) near Donetsk airport and Elenovka, a village in the eastern Ukrainian province controlled by pro-Russian separatist rebels.

Reuters reports the bombing, citing an eyewitness, as separatist rebels and the Ukrainian army accuse each other of violating ceasefire agreements and using heavy weapons.

Today, the headquarters of the joint forces operation made a fabricated accusation against the People’s Militia of the LPR in the alleged shelling of a kindergarten in the village of Stanitsa Luganskaya. This news, if I may say so, was picked up by the Ukrainian propaganda media and used to divert public attention from the regular violations of the Minsk Agreements of the Armed Forces of Ukraine and the destruction of civilian objects of the Luhansk Republic. 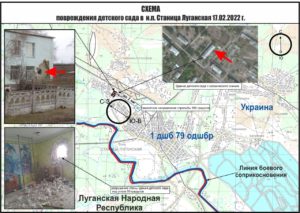 Photos with the results of the shelling of the kindergarten were presented to the public. They became the indisputable proof of the APU’s involvement in this crime.

Our experts have studied the photographic materials in detail and conducted a thorough analysis of them.The location of the kindergarten building, the angle at which the wall was hit made it possible to calculate the exact trajectory of the projectile. As can be seen in the presented diagram, the shooting could only be carried out from the eastern direction. At the same time, the position of the alleged gun from which the fire was fired is located on the territory controlled by the 79th brigade of the Armed Forces of Ukraine.

Any sane person will determine that there cannot be People’s Militia units in that direction by definition. All this proves that the farce with the destruction of the kindergarten is a provocation by Kiev in order to destabilize the situation in the Donbas.

According to our data, representatives of Western media, including the American TV channels CNN, NBC, and the Romanian TV channel ANTENA TV arrived on February 17, accompanied by officers of the 74 center for information and psychological operations in the areas of the localities of STANITSA-Luganskaya, HAPPINESS and KRYMSKE, to cover the events in the Donbas in the right direction for the West, to provide information support for the offensive operation and justify the intensification of hostilities in Ukraine in the eyes of the world community.

In addition, the arrival of film crews from Albania, Belgium, Georgia, Latvia, Luxembourg and Northern Macedonia is planned for the same purposes at the beginning of next week.
We believe that this farce was fabricated specifically for these representatives of the press.

The Brits are saying this was a ‘false flag’

THE bombing of a Ukrainian nursery on Thursday was a false flag attack by pro-Russian forces in a bid to trigger an invasion, Prime Minister Boris Johnson has said.

The PM said the kindergarten attack was a “false flag operation designed to discredit the Ukrainians” – and feared these types of strikes would escalate over the next few days. 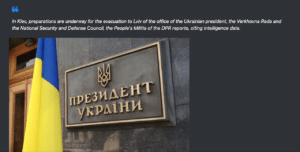 The department also recalled the evacuation of diplomatic missions of a number of Western countries to Lviv. The DPR said that Kiev was preparing an evacuation in case of failure during the hostilities in the Donbass

Russia is preparing to launch an invasion of Ukraine in the “coming days” and is planning a real or false flag attack, maybe even using chemical weapons, US Secretary of State Antony Blinken claimed at the UN Security Council on Thursday.

Speaking in the Security Council, Blinken claimed Russia had “more than 150,000 troops around Ukraine’s borders” and that the US and its allies don’t see any of them withdrawing but instead, “preparing to launch an attack against Ukraine in the coming days.”

He also claimed Russia intended to “manufacture a pretext” for attacking, though the US did not know what form that would take.

“It could be a fabricated so-called ‘terrorist’ bombing inside Russia, the invented discovery of a mass grave, a staged drone strike against civilians, or a fake – even a real – attack using chemical weapons,” Blinken said, before venturing into a description of what a Russian “invasion” would look like.

The US, Ukraine and Russia have been accusing each other of planning a false flag in the disputed eastern Ukrainian region of Donbass for months now. First the Russian Defense Ministry pointed to the presence of US private military contractors and chemical weapons in specific locations in December. Three weeks later, CNN reported that Russia was planning a false flag, citing anonymous US spies. Afterwards, militia of the Donetsk region published more details of what they said was a plan by Ukrainian saboteurs to provoke a war.

Washington has claimed an impending Russian “invasion” since October and multiple outlets in the West have even cited US and British spies to pinpoint the date of the attack to February 16. No such attack has materialized.

While “some have called into question our information, recalling previous instances where intelligence ultimately did not bear out,” Blinken told the UN Security Council, he insisted that the US and its allies spoke the truth and that Russia was lying.

Reports of “alleged abnormal military activity by Ukraine in Donbass are a blatant attempt by the Russian government to fabricate pretexts for invasion,” Blinken’s British colleague Liz Truss claimed earlier on Thursday on social media.

Moscow has repeatedly dismissed claims by the US and its allies about planning an invasion of Ukraine as “fake news.” Earlier on Thursday, Kremlin spokesman Dmitry Peskov said that statements of US President Joe Biden about an invasion “in the next several days” were actually escalating tensions in Ukraine.

High ranking officials of the Biden Administration along with NATO partners continue to accuse Russia of plotting to invade Ukraine. The Russian government, however, reminds the world community that Russia’s soldiers are on Russian soil, but America’s soldiers are in many countries. US Secretary of State Blinken told the Munich Conference that war could erupt within days.

Doc Burkhart and I will analyze what’s happening in Europe, plus we’ll give you the latest information from Canada as the Trudeau regime seeks to crush truckers defying the prime minister’s mandatory injection decree.