Police say they are committed to returning the streets of Wellington to Wellingtonians, as a former Prime Minister says politicians should meet with the protesters.

In a statement released last night Assistant Commissioner Richard Chambers said Monday morning’s operation was largely peaceful but the behaviour they have seen in the past few days show that genuine protestors are no longer in control of the behaviour in and around Parliament.

Asssistant Commissioner Chambers said spillage of effluent into storm water drains, throwing of human waste at police officers, disruption and intimidation at the courts and the University were unacceptable and those who wish to resist Police can expect enforcement action to be taken.

On Monday night tensions between protesters and police boiled over gain outside Parliament.

One man resisted arrest while being forced into a police van, while a woman tried to wrestle him back from police.

When she was pushed back, she threw a bottle of water at officers, which led to a tussle between protesters and police.

The protesters then set off fireworks. Despite these events former Prime Minister Jim Bolger says political leaders need to “get off their high horses” and meet with the protestors.

He says dialogue is the only way to end the disruptive impasse in central Wellington.

He told RNZ poltical reporter Anneke Smith that the essential principal of democracy is that leaders listen to people and the Prime Minister should hear what the protestors have to say.

A biography of Jim Bolger can be read HERE

Winston Peters visited the protestors. The media did not like it.

The only sitting MP – David Seymour of ACT

3 Policemen in Wellington hospitalised due to “Possibly acid” Thrown in Their Eyes . . Yeah, Right

Policemen hospitalised due to getting a “stinging substance” in their eyes at the same time and place that a stinging substance known as pepper spray is being fired by the police . . . but it’s “possibly acid” thrown by protestors. This, is gaslighting

The Wellington protest group is shocked by the alleged violent and antisocial behaviour exhibited during the past 48 hours by a number of individuals who do not appear to be associated with the protest.

Throughout, we have continually sought to work with Police to identify individuals involved in any criminal acts and maintain a safe and peaceful environment. We are ever-mindful that approximately 15 percent of protestors present are either children or aged over 60, and 55 percent are women.

However, significant concern has arisen during the past 48 hours over a notable lack of action by Police against identified individuals committing offences outside the protest area.

Emerging evidence of potential external involvement in placing these agitators among the protest is even more worrying.

The individual who sprayed faecal matter at Police on Monday morning was unknown to protestors. He intentionally hid behind a protestor as he sprayed the police, wore a ski mask and fled immediately. Protest organisers have asked Police for pictures from surveillance footage to help us ascertain if the person is still amongst the protest. Police denied the request.

We are now worried he may have returned to the site to perpetrate further violent acts.

Video and photographic evidence (see Clashes erupt at Parliament Protest, accusations of ‘paid police agitators’ – Daily Telegraph NZ ) has emerged that agitators use earpieces identical to that used by Police. An individual letting off loud fireworks to the rear of the protest on Tuesday morning, making a sound similar to gunshots that naturally increased tension, was immediately stopped by other protestors, and he was handed over to Police. Footage of this person is widely available on social media.

It is not surprising that many of those at the protest site are now suspicious that a deliberate and coordinated action by external parties is being waged to escalate tensions and smear the protestors.

Given the enormous numbers of Police and blanket surveillance of the area, we’ve been advised they are tracking specific trouble-makers but not acting. We can only perceive their protracted inaction is at the bidding of the Government’s PR machine. Meanwhile, anywhere up to 10,000 people per day peacefully visit Parliament grounds to protest these mandates.

The person who allegedly sprayed a mystery substance into the eyes of three Police officers today was also a person unknown to any of the protestors present. He was wearing a face-covering similar to a ski mask.

The vehicle rolled into the back of officers was outside of the protest site (as were the other events) and in an area in which Police have jurisdiction. No one was hurt.

The leaders of the combined groups that comprise the majority of the protestors condemn any acts of violence and request that Police do more to work with them in removing known perpetrators. We also believe that subversive actions of people posing as protestors is an underhand and dishonest tactic that doesn’t fit with New Zealand values.

It has not been helpful today that Police raised with media the possibility for sexual assaults before communicating that to us and before anything of the nature had occurred at the site. This is despite a legal representative having daily and sometimes hourly contact with Police on our behalf for this express purpose.

We are increasingly of the view that Police are playing PR games – taking a leaf out of the Prime Minister’s book. It’s not drawing too long a bow to observe that it would suit the interests of both Police and Government for the trouble-makers to cause problems for media to report widely upon.

We urge politicians to reflect on a professional survey that revealed the majority of protestors are the exact opposite of “ferals”, far-right extremists and “a river of filth”. Of the 312 people researchers spoke to on-site over the weekend, 27 percent are Maori, and 45 percent voted Labour or Greens at the last election. See: RESEARCH: Parliamentary Protest Poll Results Feb 2022 | The Platform

Speaking on behalf of the majority of the groups represented on-site, we are unanimous in our commitment to maintaining a peaceful protest that does not support any violence.

Today, we have passed on our sympathies via official Police channels to the officers injured during the past few days.

Re: Press Release from the NZ Human Rights Commission …

I am now free to share with all of you that THIS is the meeting I attended (by zoom) yesterday.  A gathering of the Human Rights Commissioner, Human Rights lawyers, mandated professional reps, some freedom group representatives, vaccine injured and vaccine bereaved, police…and myself.

The dialogue was, I believe, constructive.  I (and others) were able to share the pain and reality of many of our health forum members suffering with injury, death of loved ones, mandates and declined medical exemptions.  I have also made a written submission to the Human Rights Commissioner on behalf of all New Zealanders (and especially those i know the best…Health Forum members).  Now we wait to see if the opened dialogue has inched us closer together.

Thank you to all of you for your support…for the almost 2,000 emails you have sent me sharing your mandated out stories.  Due to the sheer volume I am unable to respond to you personally, and I am also unable to submit all of them to the Human Rights Commission.  I have instead created a 30 page document of your representative stories, and submitted them to The Human Rights Commissioner.

I also have a plan B for your stories….I am going to video record the reading of some of them (WITH YOUR EXPRESS INDIVIDUAL WRITTEN CONSENT FIRST). The majority of New Zealanders have absolutely no idea what you are going through.  If they can hear your stories, it will build a bridge of understanding and empathy… and help to heal our deep society wound.

Ex-leader of the ACT Party has penned an opinion piece, “The protestors have won”. 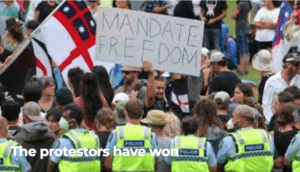 That can be read HERE

Accused of being a Government funded COVID propaganda unit by many, Stuff.co.nz manipulated a video to cover up police brutality, according to independent media outlet Freehive.

The misleading video, with commentary provided by Chantelle Baker via Freehive, concealed footage of a policeman provoking a protester with a punch, and then savagely eye-gouging him as the victim, who was caught at the forefront of a surging crowd, could not free his hands. With the officer’s actions blocked out by Stuff.co.nz graphics, the resulting video appeared to show the protester as the instigator of the violence, when in fact, he was naturally reacting to the officer’s brutal assault.

With rising levels of disdain and distrust in the legacy mainstream media both here and abroad becoming more prevalent, Stuff.co.nz’s actions are sure to add further fuel to a fire that’s already blazing hot.

In the year to April 2021, Stuff Ltd, publisher of Stuff.co.nz received $2.37 million from the government’s ‘media support package’.