The offensive in Ukraine has resumed after it gave civilians some hours to get out. Western press is calling this a “ruse”

The Russian Ministry of Defense announced on Saturday that offensive operations in Ukraine would resume from 18:00 Moscow time “due to the unwillingness of the Ukrainian side to influence the nationalists or extend the ceasefire.”

“Not a single civilian was able to leave Mariupol and Volnovakha along the humanitarian corridors. The nationalist battalions took advantage of the ceasefire to strengthen their positions,” the statement said.

At the request of the Ukrainian side, a ceasefire was called in the area around the cities of Mariupol and Volnovakha, with a complete halt in hostilities imposed to ensure the evacuation of the civilian population.

“Not a single civilian could get out along the designated humanitarian corridors. The population of these cities is held by Ukrainian nationalists as a ‘human shield’,” however, the Russian Defense Ministry said.

Ukrainian officials halted the evacuation, accusing Russia of continued shelling despite its promises it would ensure safe passage.

Russian forces are blockading Mariupol, which has been held by Ukraine. Moscow recognizes the city as part of the Donetsk People’s Republic, which broke away from Ukraine shortly after the 2014 coup in Kiev.

Moscow launched a full-scale offensive in the country last week, arguing that it had to “defend” the Russian population of the breakaway Lugansk and Donetsk People’s Republics, as well as “demilitarize” and “denazify” Ukraine. Kiev said the invasion was unprovoked and appealed to the international community for help.

Ukraine has accused Russian forces of shelling residential areas in several regions, including the capital Kiev and other major cities. Moscow insists it is targeting only military infrastructure.

This interview was on the Russian Ministry of Foreign Affairs twitter account.  You could call it propaganda but it accords with what I am hearing from people on the ground (like Russell Bentley)

Make your own mind up if this is propaganda or not. It accords with what I know.

Russian Defence Ministry: Despite all the efforts and the humanitarian corridors by @mod_russia, the Neo-Nazi combat units in Mariupol’ prevent civilians from leaving the city, using them as human shields…

Only few families manage to escape. Here’s a first-hand account

This came out a few days ago

With the Russians trying to set up humanitarian corridors, it is now apparent that there is a Ukrainian policy of shooting civilians trying to leave cities.

Footage comes from Mariupol where a husband and wife come upon a massacre at a Ukrainian checkpoint.

Putin made clear a no-fly zone would result in the Kremlin’s immediate declaration of war on any country intervening in such a way. The AP reported and translated his fresh comments made before civilian aviation industry members and pilots as follows:

A no-fly-zone would spell war for any third party who tries to enforce one over Ukraine, Vladimir Putin has said.

Speaking at a meeting with female pilots on Saturday, Putin said Russia would view “any move in this direction” as an intervention that “will pose a threat to our service members.”

“That very second, we will view them as participants of the military conflict, and it would not matter what members they are,” the Russian president said.

Further he addressed the ratcheted up sanctions on Russia from the West, which are now serving to isolate Russia almost on levels akin to the US sanctions regimen on Iran – with of course the important exception that the US has not yet directly targeted Russian oil and gas exports.

“Sanctions against us are like declaring war on Russia,” Putin said additionally in the meeting with military members.

He further painted a positive picture of Russia’s strategy and military operations on the ground, at a moment many Western officials and pundits in the media have pointed out major problems for the invaders as Ukraine mounts a fierce ground resistance…

The second round of Ukraine-Russia talks which took place Thursday reached a key agreement to allow for the evacuation of civilians in areas of Ukraine seeing intense fighting by establishing ‘humanitarian corridors’. With a third round of talks agreed upon to take place at the start of next week, the potential for local ceasefires sparked hope that this could lead to a broader ceasefire over the country.

These corridors were erected in at least two major cities which have been under bombardment by Russia – Mariupol in the southeast on the Sea of Azov, and the eastern city of Volnovakha. The local ceasefires were seen as a significant breakthrough which could lead to a wider pause in fighting, but that appears to have already broken down, after civilians in a city of some 400,000 were only given five hours to exit Mariupol on Saturday.

Shelling by Russian forces has reportedly since resumed, with the brief ceasefire now effectively over. President Zelensky’s office issued a statement blaming Russia for breaking the deal: “The Russian side is not holding to the cease-fire and has continued firing on Mariupol itself and on its surrounding area,” it said.

The ceasefire for allowing the exit of civilians in Volnovakha has also reportedly broken down. “Talks with the Russian Federation are ongoing regarding setting up a cease-fire and ensuring a safe humanitarian corridor,” the statement by Zelesnky’s office indicated.

Additionally Deputy Prime Minister Iryna Vereshchuk said, “We appeal to the Russian side to stop firing,” according to the AP. Mariupol had prior to the humanitarian pause been under continuous shelling for some 30 hours, according to international reports.

Likely Russia sees the 5-hour ceasefire as having been sufficient time to allow for civilian evacuations. Mariupol has been described as under complete siege, and with no water or electricity. Given it’s a city of some 400,000 – it’s more than likely that many thousands of civilians remain there as the shelling resumes.

City authorities have said they believe at least 200 civilians have been killed since the start of the attack on Mariupol.

Meanwhile Germany has issued new numbers after the United Nations previously reported that over 1 million Ukrainians have fled the war. “More than 27,000 refugees have arrived in Germany from Ukraine since the beginning of the Russian invasion on Feb. 24, according to Germany’s interior ministry,” CNN reports. “Germany’s Federal Police has registered 27,491 refugees from Ukraine in Germany to date, an interior ministry spokesperson confirmed to CNN Saturday.”

The Russian “pliers” tightened in southern Ukraine, with the result that Moscow urgently requested humanitarian corridors to start clearing operations.

The entire southern region of Ukraine is lost to Kyiv. Ukrainian forces have collapsed, lost their large military base in Kherson and Moscow has cut off their supply arteries.

It is no coincidence that the mayor of the city of Energodar, where the battle for the nuclear plant took place, called on the citizens not to provoke the Russian forces.

The Ukrainians know that a million dead soldiers of the Azov and Aidar Battalions are coming to the areas of Mariupol, Nikolaev and soon to Zaporizhia.

For the last 24 hours, operations of the Russian airborne forces have been taking place continuously. At least two such operations took place last night, with Russia trying to take control of the country’s second-largest nuclear power plant, the Yuzhnoukrainsk nuclear power plant in southern Ukraine.

As WarNews247 reported a few days ago, Kyiv will no longer have electricity…

On Saturday morning, Moscow announced a ceasefire following calls for a humanitarian corridor in an operation that has entered into force and would last until 16:00. However, according to the Ukrainians, the ceasefire was not observed, as a result of which they called on the civilians to return to their homes.

The Ukrainian government said the plan was to evacuate about 200,000 people from Mariupol and 15,000 from Volnovaka, and the Red Cross was the guarantor of the ceasefire.

Meanwhile, Russian Foreign Minister Sergei Lavrov discussed with his Belarusian counterpart Vladimir Mackay plans to set up humanitarian corridors in Ukraine from which foreigners could leave the country.

This is the firm Russian method that Moscow has faithfully followed in Syria. After closing all escape routes, a humanitarian corridor is opened for the civilian population to leave. Then whoever is left behind is considered an enemy and the massacre begins if he does not surrender.

Therefore, Mariupol and the other cities, Nikolaev-Zaporizhia, will be “cleansed” by the Azov and Aidar Battalions very soon.

The Russians opened a humanitarian corridor as shown in the map below through the Mariupol-Nikolske-Rozivka-Polohy-Orihiv-Zaporizhia areas with the explicit prohibition not to deviate from this highway. At the moment the evacuation has been stopped, but it is expected to start again.

Controlling the entire road axis, the Russian Army is monitoring the entire area as it has set up checkpoints along it. In addition, Donetsk forces arrived in the Zaporizhia region, converging on Russian forces.

Russian “pliers” have been created in the area.

See the map. The civilians will be transported from Mariupol to Zaporizhia 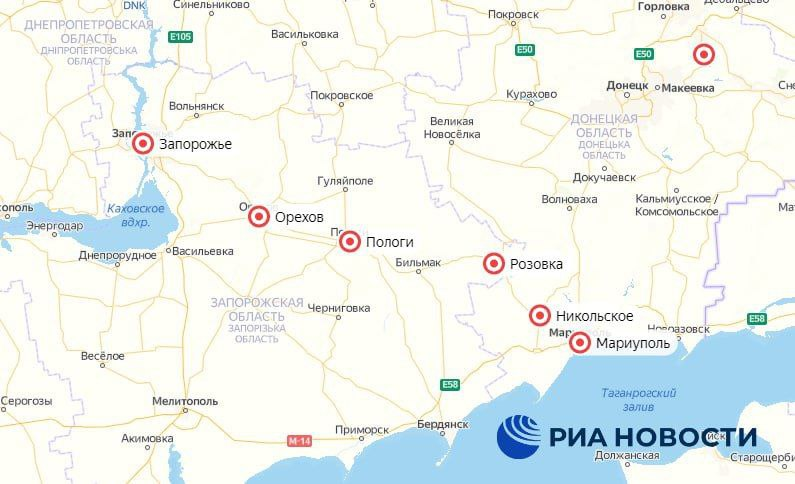 The Nikolaev area is now surrounded and the countdown to its fall begins.

Russian paratroopers landed in the village of Yastrebinovo in the Voznesensk region.

Their purpose is to close the northern entrance to the Voznesensk region, through which the Ukrainian Army transports forces and supplies. At the same time, fierce fighting is taking place in the village of Yastrebinoye.

The Russian Army has a great opportunity to cut the Kyiv-Odessa road axis to follow the siege of the city.

At this point, the Russian Armed Forces are strengthening their positions opposite the Ukrainian positions on the line of contact connecting the Pervomaisk-Yuzhnoukrainsk-Voznesensk regions.

The Ukrainians have suffered heavy losses in the region. The Russian Air Force blew up a military depot in Ochakovo while the large Ukrainian military base in Kherson fell into the hands of the Russian Army.

The Russians are preparing for a large “broom” operation of the Ukrainian forces in the areas of Nikolaev-Mariupol and Zaporizhia.

A large Russian military phalanx was recently spotted in the Crimean city of Dzhankoi heading south on Ukraine.

Two more Russian military phalanxes were located in the Bryansk region towards Kharkiv and Sumy as well as in Melitopol. These vehicles bore a new strange symbol.

It is understood that Ukrainian forces have completely collapsed after the fall of the city of Energodar and Kherson.

Russian forces are now advancing on Vasilevka with a final destination in Zaporizhia. 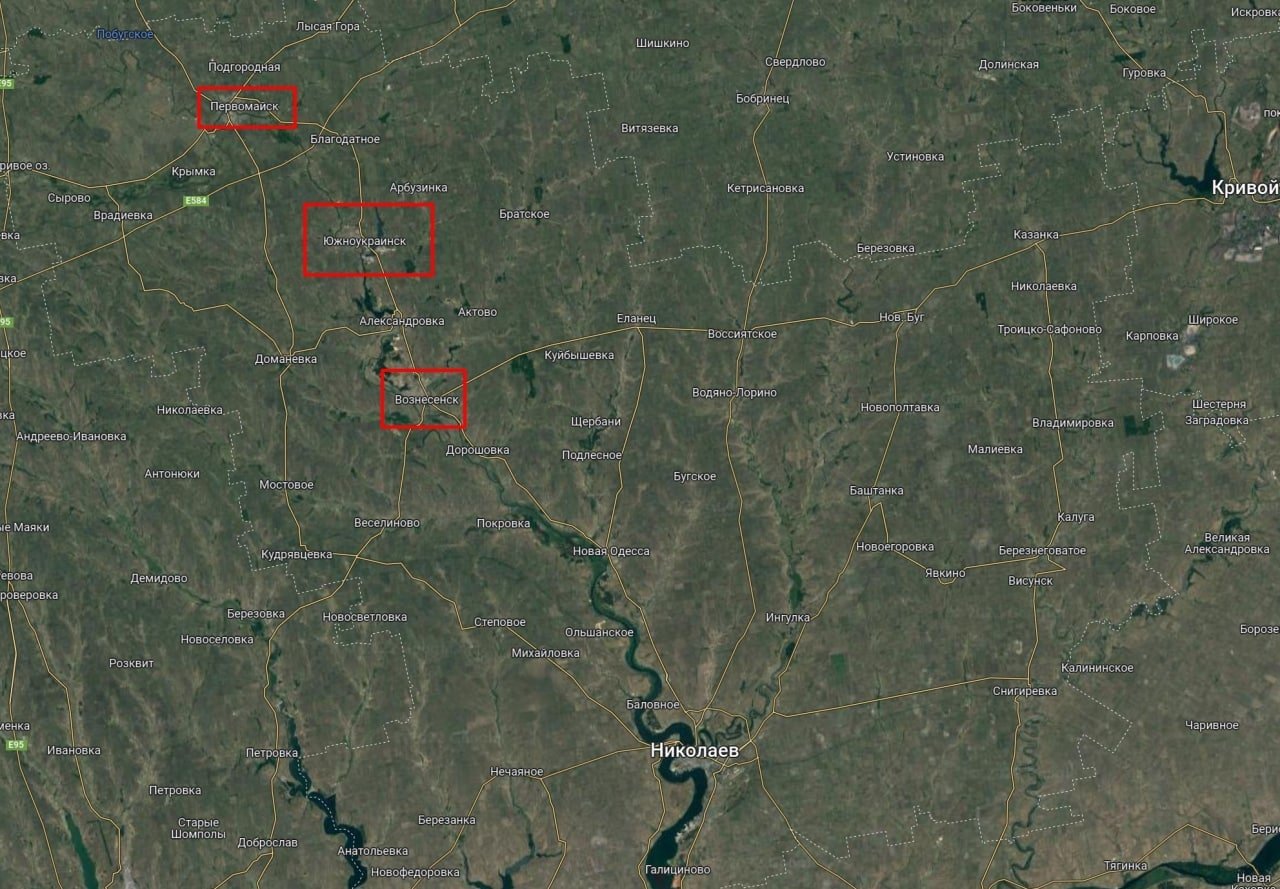 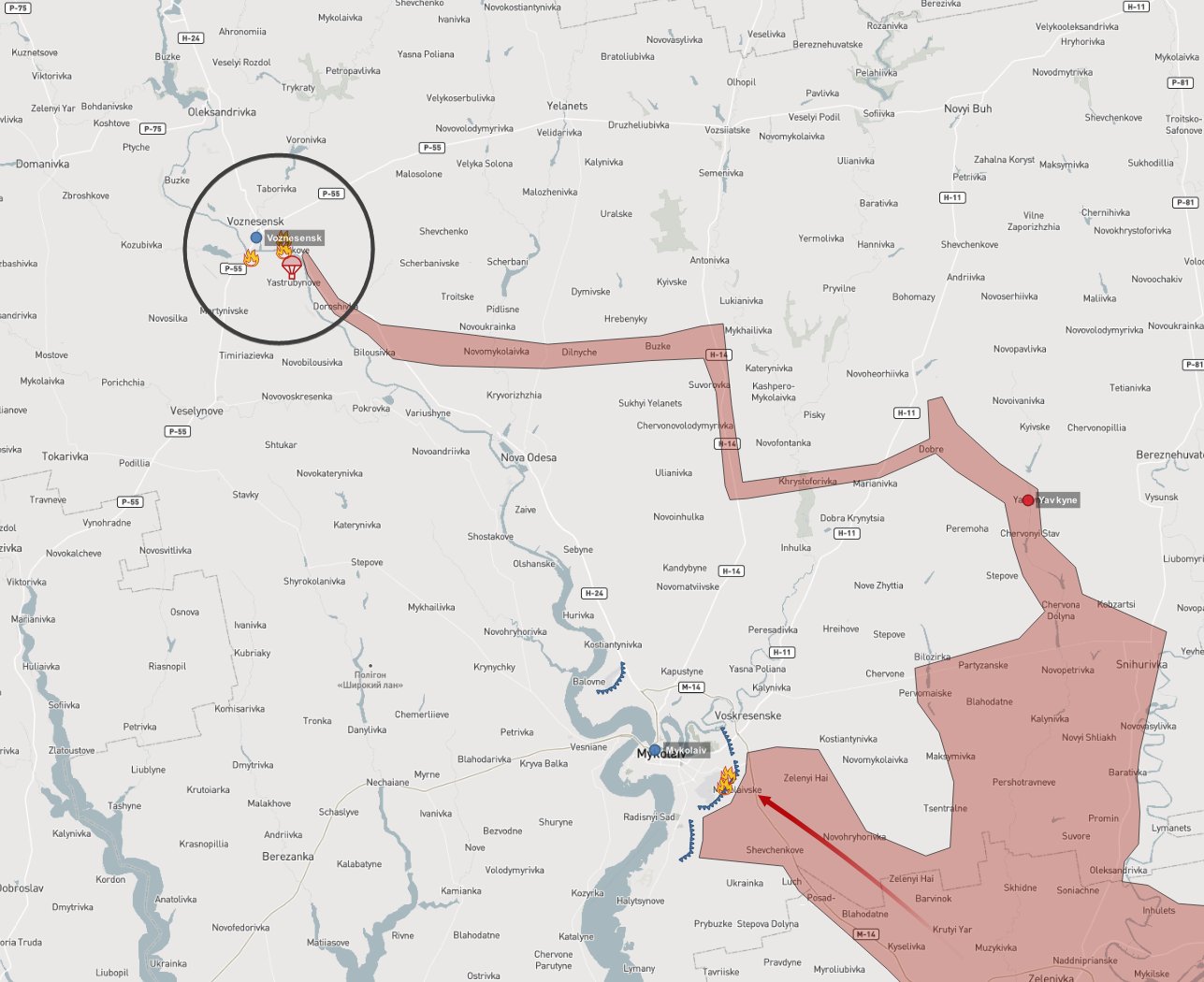 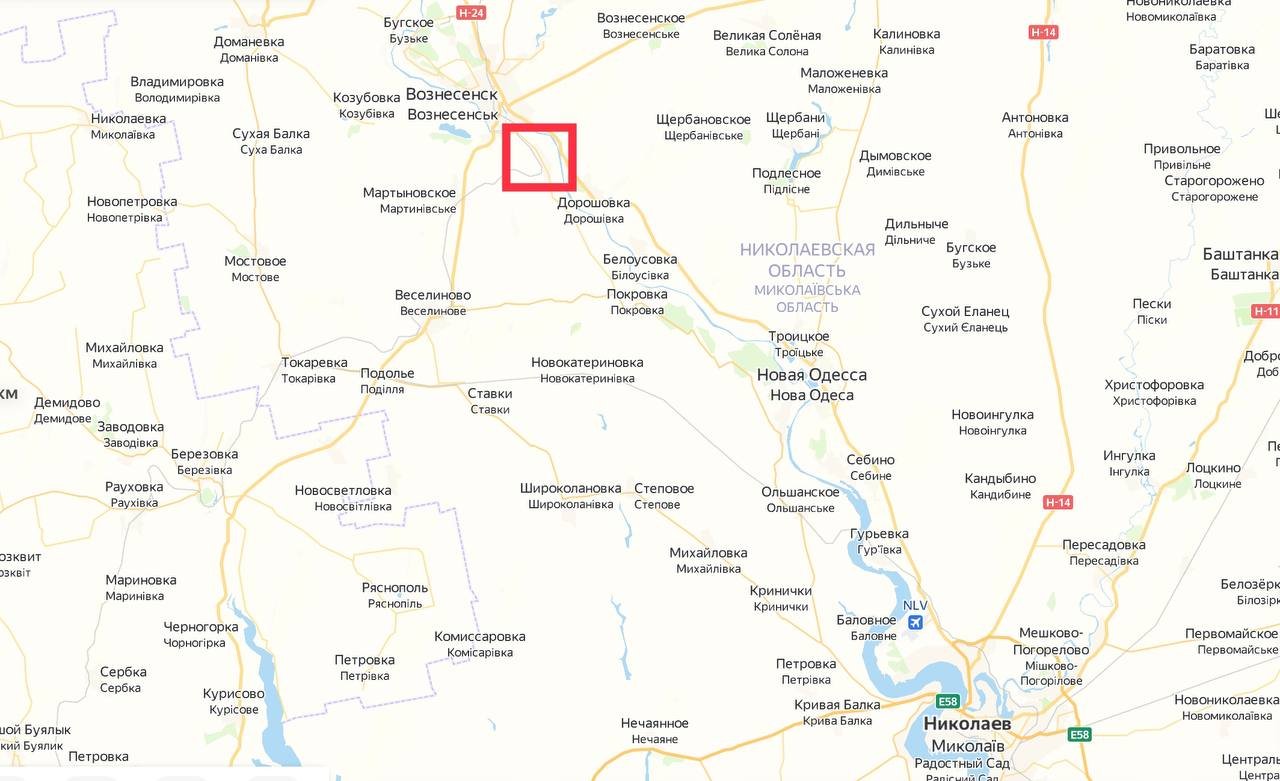 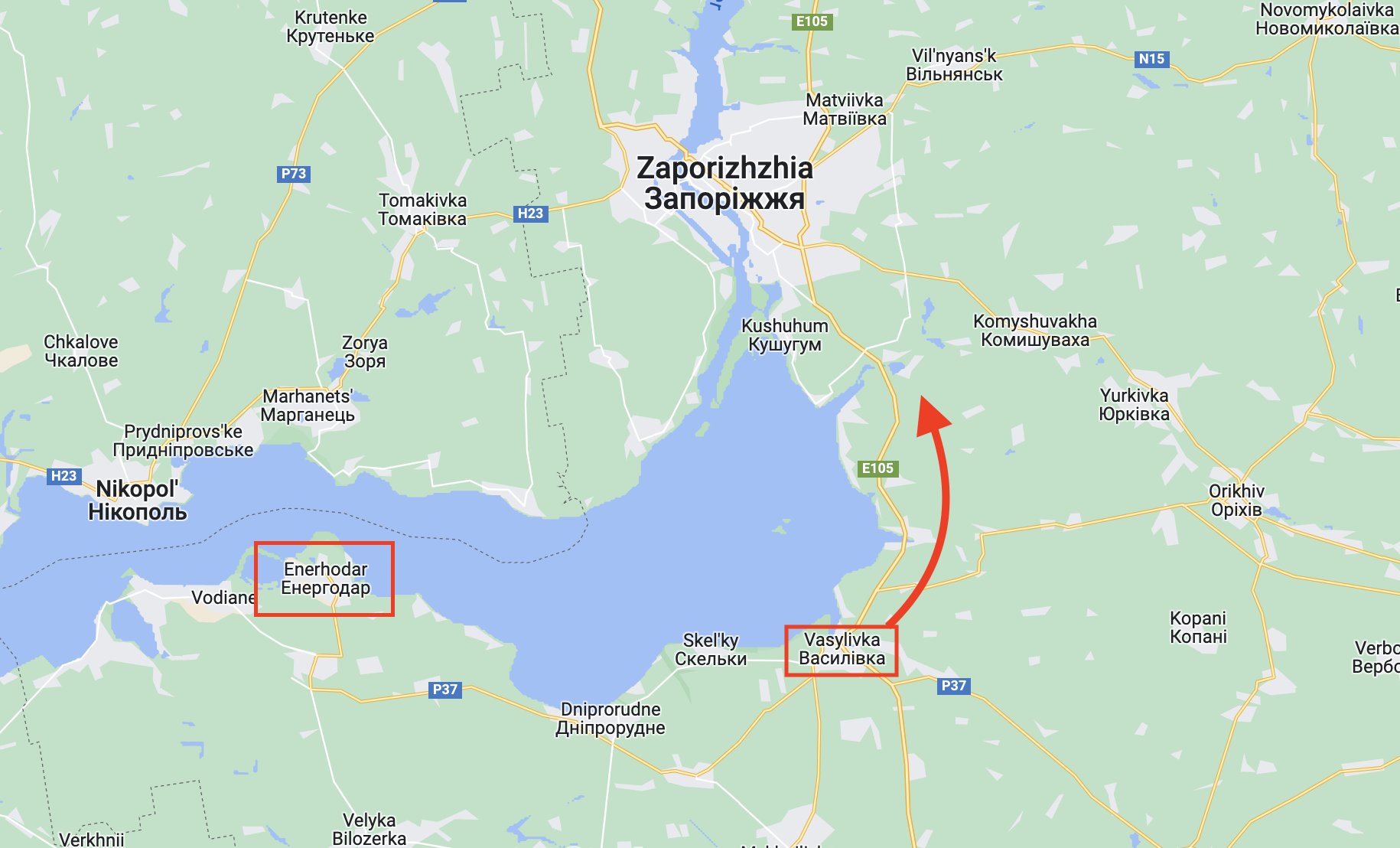 Russian forces outside the nuclear plant 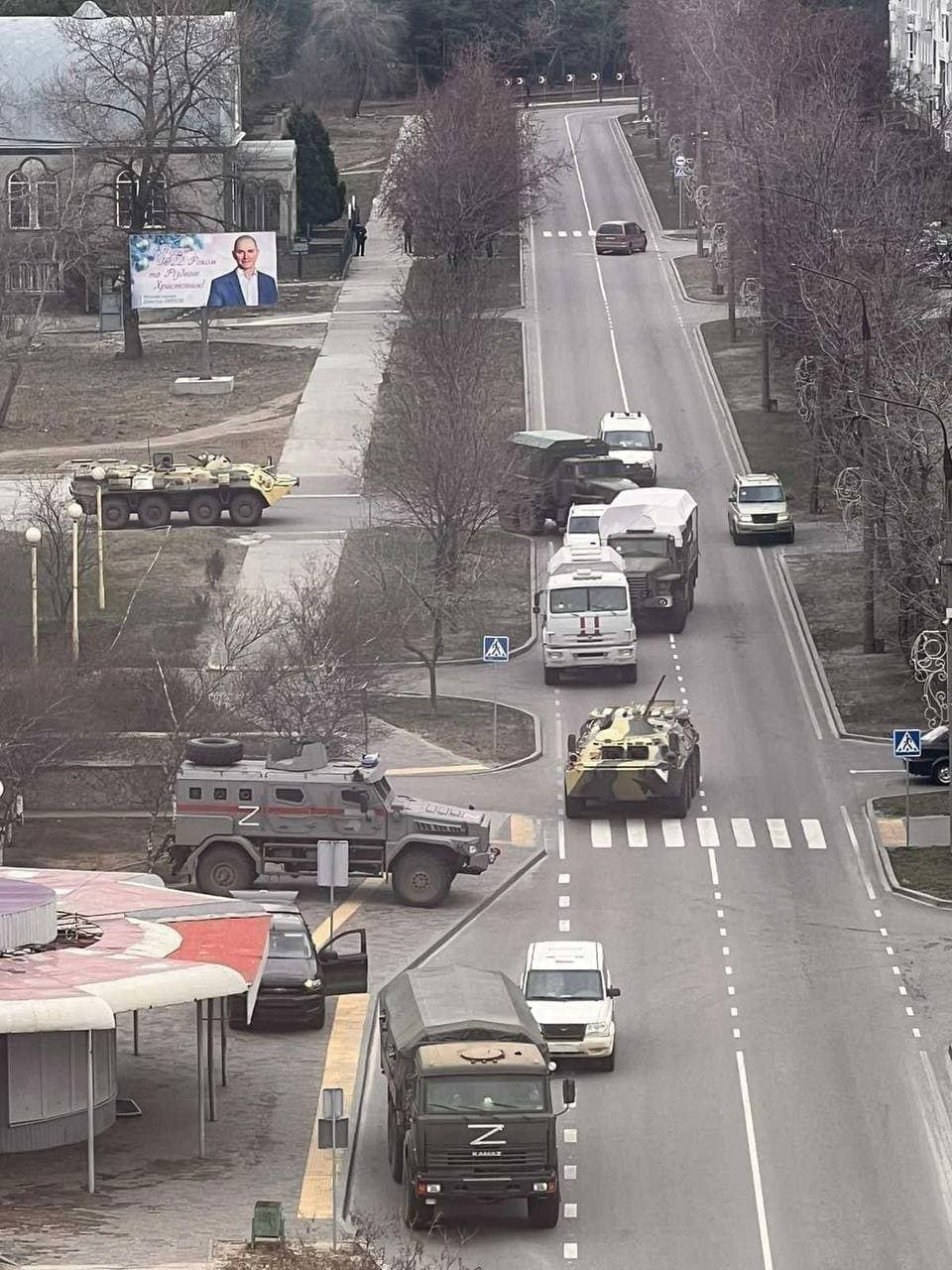 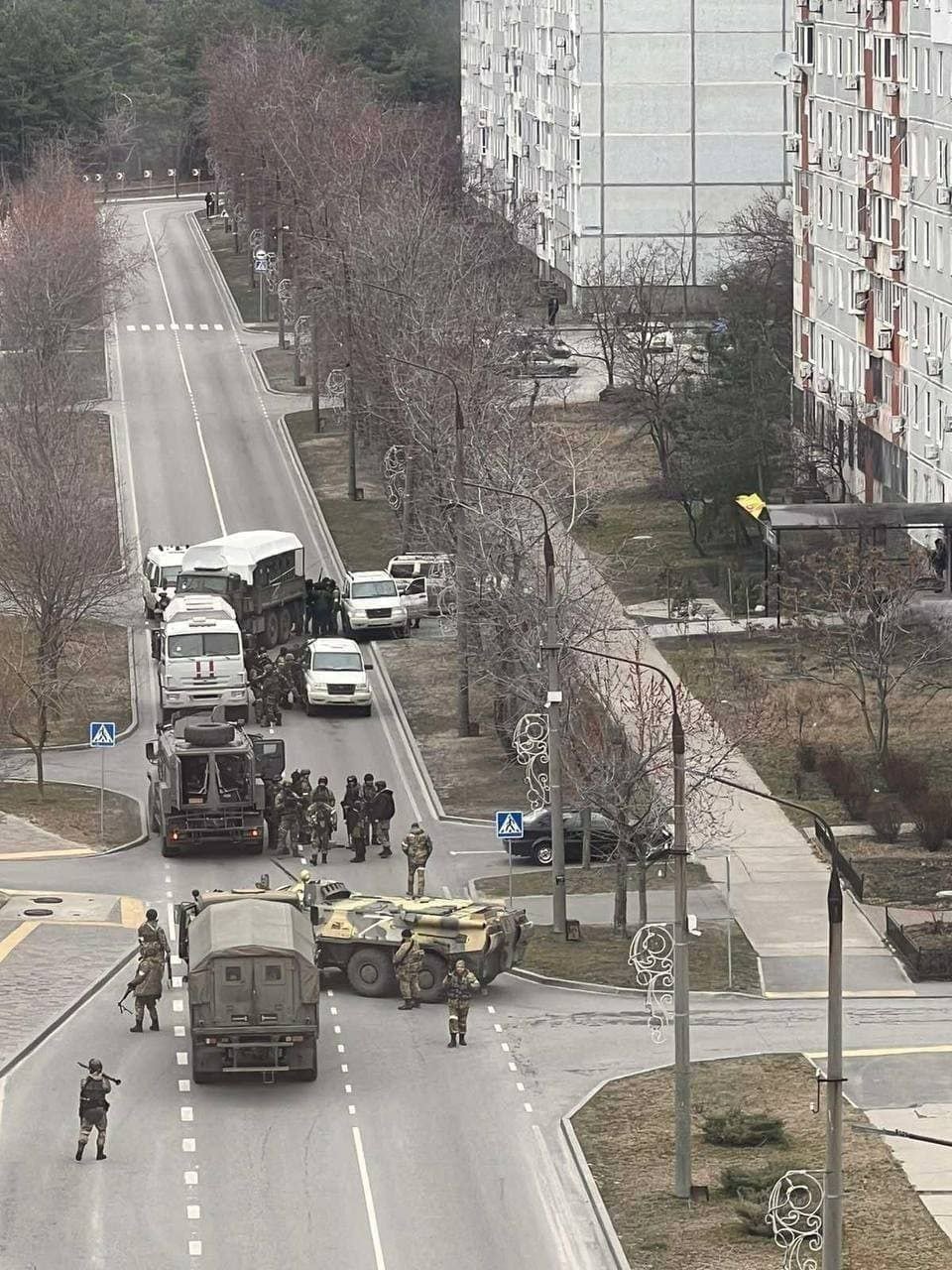 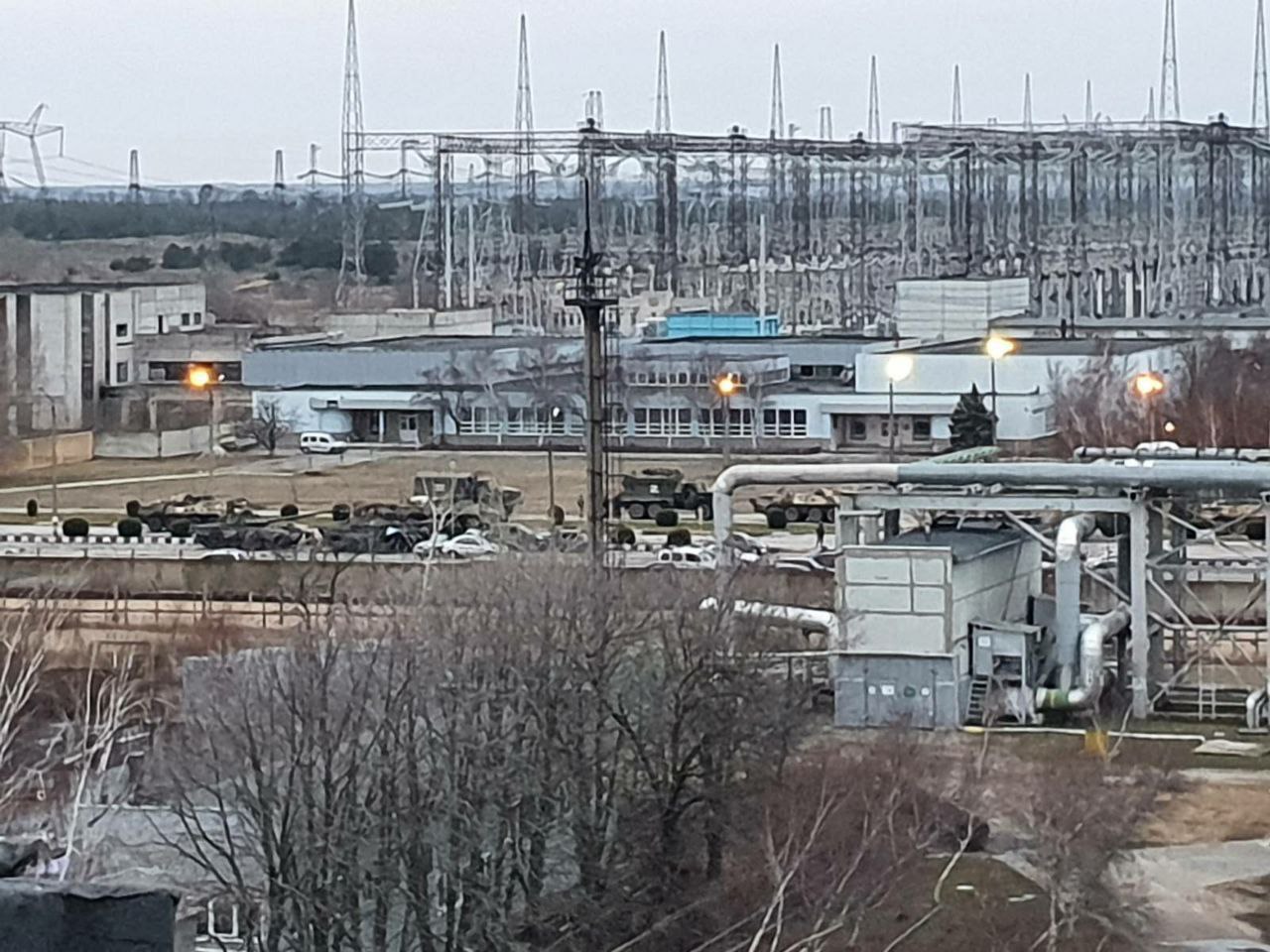