Russia on Friday bombed a Ukrainian military factory producing the type of missiles claimed to have sunk the Moskva warship a day earlier, amid reports that the captain died onboard.

The Vizar military factory outside Kyiv, the Ukrainian capital, was partially destroyed in the overnight Russian strikes, according to an AFP reporter at the scene.

Moscow had vowed to retaliate after the Moskva, the pride of the Russian Black Sea fleet, sank near Ukraine’s coast late on Thursday – Russia’s biggest warship casualty since the Second World War.

Ukraine claimed the vessel had been hit by two Neptune missiles, an account confirmed on Friday by the US.

According to a statement on the website of Ukroboronprom, Ukraine’s state weapons manufacturer, the Vizar factory produced Neptune missiles.

Andrei Sizov, a 47-year-old owner of a nearby wood workshop, said the strikes came at night. “Around 1:30 am, my security guard called me because there was an air strike,” he told AFP.

“There were five hits. My employee was in the office and got thrown off his feet by the blast. They are making us pay for destroying the Moskva.”

After the attack on the Moskva on Thursday, the Kremlin initially said its weaponry was not damaged and it was en route back to its home base at Sevastopol, in Russian-occupied Crimea.

But later on Thursday, the Russian defence ministry admitted the loss in a statement that said: “While being towed towards the destined port, the Moskva cruiser lost its balance due to damage sustained in the hull as fire broke out after ammunition exploded. The vessel sank due to the choppy seas.”

The ministry later said all the crew, thought to be around 500, had been evacuated.

But Ukraine on Friday claimed that the ship’s captain, commander of the Black Sea Fleet Anton Kuprin, died during the explosion and ensuring fire on board.

A senior US official said Washington also believed there were Russian casualties, though the numbers were unclear.

Ukraine said it was braced for further retaliation. “The Moskva cruiser strike hit not only the ship itself – it hit the enemy’s imperial ambitions,” Natalia Gumeniuk, a spokesman for Ukraine’s southern military forces, said on Friday.

“We are all aware that we will not be forgiven for this. We are aware that attacks against us will intensify and that the enemy will take revenge.”

“We saw that other ships tried to assist it [the Moskva], but even the forces of nature were on Ukraine’s side because the storm made both the rescue operation and crew evacuations impossible.”

Mikhail Razvozzhayev, the governor of Sevastopol, on Friday described the sinking as a personal loss, writing on social media: “The cruise was a true symbol of our city, and we all feel the pain today. Rest in peace, Great Ship.”

Several dozen people gathered at a war memorial in Sevastopol to commemorate the ship on Friday afternoon. A funeral wreath with “the Moskva” emblazoned on it was placed at a monument marking the 300th anniversary of the Russian navy.

A Kremlin spokesman on Friday rejected suggestions that Vladimir Putin should visit Sevastopol to oversee the investigation into the attack on the Moskva, calling it a matter for the defence ministry.

The vessel was inaugurated in 1983 under the name Slava before being renamed Moskva in 1996 and has played a major role in Russian military campaigns.

Most recently, the Moskva was involved in the operation against Ukraine’s Snake Island, in the Black Sea, in the first days of the war, when it called Ukrainian soldiers to surrender. In a widely circulated recording, a Ukrainian soldier replied: “Russian warship, go f— yourself.”

Russian pundits called for more airstrikes on Ukraine in response to the sinking. “The Moskva is an absolute reason for an all-out war, 100 per cent,” Vladimir Bortko, the film director, said on a news talk show on Thursday.

But Igor Girkin, a retired Russian officer who led separatist rebels against the Ukrainian government at the start of the 2014 war in the east of the country, posted a sarcastic statement that said: “Who at our General Staff could imagine the Ukranianians would fire in response?”

A ‘flagship’ russian warship is a worthy diving site. We have one more diving spot in the Black Sea now. Will definitely visit the wreck after our victory in the war.
BTW, I already have 300 scuba dives pic.twitter.com/q2Buc51qeI

Ukrainian officials have been quick to gloat over the incident. Oleksii Reznikov, the Ukrainian defence minister, wrote on Twitter that the wreck would make an excellent site for divers.

“We have one more diving spot in the Black Sea now,” he added. “Will definitely visit the wreck after our victory in the war.”

Russian Navy flagship is BLOWN UP: ‘Go f*** yourself’ warship Moskva is ‘hit by Ukrainian missiles’, explodes and rolls over in the ocean as 510 crew are evacuated – amid fears of hundreds of deaths in massive blow to Putin 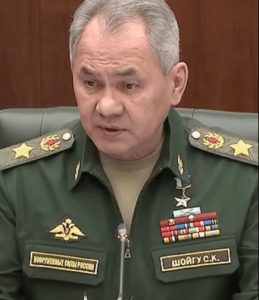 Nightmarish report by a Russian commander: “We lost a month of war with nightmarish mistakes – We live again in 1940 with Finland”

The “knives in the Russian Army came out

Colonel Igor Girkin or Igor Strelkov, a former FSB / GRU officer and former Commander-in-Chief of Donetsk forces, have launched a vicious attack on the Russian military leadership over its mistakes and choices.

He also took part in the war in Chechnya, in the conflict in Transnistria in 1991, and also fought as a volunteer in the Bosnian war on the side of the Serbs.

The first part of the interview that you will watch in the video, was given 10 days ago, while the second part was published a while ago, in which he directly suggests the creation of a militia in the Russian cities bordering Ukraine.

D-Day and for B. Putin the Donbass – “Boils” the Russian Army: You made catastrophic mistakes – Declared Patriotic War & general mobilization

“We have no control over Northern Ukraine”

Reliable maps show that Russia has no control over any point from Chernihiv to Sumi which some have shown in red.

There are only narrow corridors along the roads and junctions leading to Kyiv. We have completely withdrawn from northern Ukraine, these areas are not even under siege.

Ukrainian forces in these cities have contacts with the suburbs and with Kyiv itself.

These cities have their own reserves and resources, there are territorial Defense units formed there.

If we think that soon the times will change and that Ukraine is rapidly mobilizing its forces these areas are as vulnerable as the war with Finland in 1940 ( The Winter War (in Finnish Talvisot) was a typical case of David’s confrontation with Goliath: Although the USSR eventually prevailed, it suffered disproportionately large losses for its gains, the prestige of the Red Army plummeted (170,000 dead, while Finland had only 26,000 dead).

Our forces then advanced along the roads to cut Finland in half. As a result, numerous and better-equipped Finnish forces cut off communications between our forces and decimated them one by one using regular Jagers.

In any case, it seems that the Russian forces had to retreat from these areas.

These forces will move in directions where the situation can change.

“We lost a month of war – I doubt Donbass”

Honestly, I doubt when we have lost the “golden” first month of the war, that our forces will be able to encircle and destroy the Ukrainian forces in Donbas.

Unfortunately, I see that the Ukrainian military administration is acting better than the Russian one.

You can call me a traitor, but at least I’m a special agent with a lot of military experience.

“Russian military militias on the border”

In the second part, Igor Strelkov (Igor Girkin) proposes the immediate creation of a People’s Military Militia as a separate Army Corps by the standards of the Ukrainian Land Defense Forces.

” Ukraine’s armed forces have begun bombing Russian territory. The case smells of “gunpowder” and if something does not change urgently during our military operation we may have a new Beslan somewhere in the border area.

A raid somewhere in Bryansk or the Belgorod region with the capture of a school or a hospital is not unlikely by Azov members following the example of Chechen terrorists.

“I am ready to lead the popular militia in the Bryansk region. And Belgorod. Ή Kursk. Ή Gomel. Ή Mogilev (ie, in the territory of Belarus).

Authorities in the Belgorod region have already announced the creation of voluntary grassroots groups. They have been creating trenches along the Ukrainian border for days. Will militias with unclear legal status and without weapons be able to defend their cities and homes?

A similar structure must be created in Russia as Ukraine did and they must be given the appropriate military equipment. We clearly do not have enough ground forces in all directions and the length of the border with Ukraine is huge. It would make a lot of sense to form a new branch of the armed forces.

This new corps will be based on local reservists and men ready to defend their city and home with weapons in their hands. This could solve many problems with security and border control. Decisions must be made as soon as possible.

But let’s be honest. These right decisions are mandatory and are aimed at combating the consequences of our business. But what is the cause?

The main reason for the need to organize the defense of the already Russian territory is the incorrect (!) Planning of the special military operation in Ukraine.

There are persistent rumors that according to the original plan, we were supposed to be welcomed as liberators in the cities of Ukraine. Hence the rapid drop of paratroopers over huge distances without having “cleared” the back, resulting in the Ukrainians destroying the supply convoys.

“It is wrong to leave Northern Ukraine”

Eventually, we were forced to retreat from Kyiv to transfer forces to Donbas. Leaving northern Ukraine was another strategic mistake.

Now the Ukrainian army, having created a strong force near the Russian border, is threatening our territory. This forces the General Staff of the Armed Forces of the Russian Federation to maintain a significant force there, thus weakening the Eastern Front.

Something that Kyiv or rather its foreign military advisers are actually trying to achieve.

“We have to do that Turkey in Northern Syria”

In fact, in this direction, Russia has switched from offensive to strategic defense and this is a big mistake.

In addition to the rapid deployment of domestic Territorial Defense Forces, in order to protect our territory, it is necessary to return to northern Ukraine and establish a security zone there, as Turkey has implemented in northern Syria.

Having a network of forts, the Armed Forces of the Russian Federation will be able to re-create the threat of attack in Kyiv and confront-occupy the forces of Ukraine and the Ukrainian National Guard, which will try to retake their settlements.

“This will not only ensure the security of the Russian territories, but will also weaken the enemy.”