Rumours are swirling in Moscow that a number of former generals and KGB officials are preparing to oust Russia’s president Vladimir Putin and plan to end the war in Ukraine, which is increasingly seen across Russia as a strategic mistake and, above all, an economic disaster.

The top of Putin’s former employer – the Russian security service FSB – is said to be so frustrated about the lack of military progress in Ukraine that it has reached out to a number of generals and former army officials, according to various analysts and local media reports.

In particular a group called the ‘Siloviki’ – which comprises of former FSB officers who are active in Russian politics – is said to be pushing hard to replace Putin, together with former officers from the GRU, KGB and FSO, other Russian intelligence units.

Mariupol Mayor Vadym Boichenko has announced Wednesday that Ukrainian officials no longer have communications contact with the estimated couple thousand Azov fighters still holed up beneath the cavernous Azovstal steel plant in Mariupol.

Hundreds of civilians are also believed still trapped there, and running low on food, water and supplies. As we detailed Tuesday, for the first time in the weeks-long standoff for the sprawling complex, Russian forces attacked the plant as Azov fighters briefly emerged and reportedly set up firing positions.

These sporadic gun battles have continued, as part of the final showdown for Azovstal, and as the trapped Ukrainian militants vow to fight till the end, refusing Russian demands to immediately come out and surrender. Some few hundred civilians have also been safely led out over the past number of days under UN and Red Cross brokered ceasefires.

Ukrainian militants are attempting to take up firing positions but these efforts are being suppressed, President Putin’s spokesperson says
Azovstal Metallurgical Plant in Mariupol. © RIA/Alexey Kudenko

Russian forces are not storming the Azovstal steelworks in Mariupol, where Ukrainian military servicemen and members of the neo-Nazi Azov battalion have been holed up for more than a month, Kremlin spokesperson Dmitry Peskov told journalists on Wednesday.

According to the official, the Russian military is abiding by President Vladimir Putin’s earlier order not to storm the plant.

“There is no assault. We see that flare-ups occur when militants get out to assume gun emplacements. These attempts are being suppressed quite promptly,” he said.

On Tuesday, several Russian and Ukrainian media outlets reported that fighting had broken out at and around the giant steelworks compound following a few days of relative calm thanks to a ceasefire declared by Moscow to ensure the evacuation of civilians from the area. According to these reports, the Azovstal plant was being pounded by artillery and aerial bombardment. Unverified footage circulating on social media appeared to corroborate this, depicting plumes of smoke billowing from the facility.

The Donetsk People’s Republic claimed that the Ukrainian military and Azov fighters holed up at the industrial facility took advantage of the lull in the fighting provided by the evacuation ceasefire to take up new positions.

Moscow says its forces now control the entire port city of Mariupol, except for the Azovstal plant, which boasts an extensive network of fortified Cold-war-era bunkers and tunnels, where Ukrainian troops have been besieged for over a month.

On April 21, Russian President Vladimir Putin called off an operation to storm the steelworks, fearing heavy casualties among Russian troops, and ordered instead to impose a complete blockade of the Ukrainian forces holed up there.

In addition to the question on Russia’s strategy in Mariupol, Peskov was also asked to comment on reports in the Western media claiming that President Putin could order a mass mobilization in Russia on May 9, the day when the country celebrates its victory in World War II. The Kremlin spokesperson dismissed these claims as “rubbish,” reassuring the journalists that Putin was not planning to declare war on Ukraine.

Peskov also lamented the lack of progress in Russia-Ukraine talks, accusing the Ukrainian leadership of constantly changing its position. He added that Moscow was unsure whether the negotiations would bear any fruit.

When asked about the sixth round of EU sanctions, which representatives of all 27 member states are expected to adopt later this week, Peskov noted that sanctions were a double-edged sword and that European citizens would have to pick up the tab.

Days ago Russia’s foreign minister issued a formal appeal to the United States to immediately halt the supply of Western arms to Ukrainian forces if they are “really interested in resolving the Ukraine crisis.”

“If the US and NATO are really interested in resolving the Ukraine crisis, then first of all, they should wake up and stop supplying the Kyiv regime with arms and ammunition,” Sergey Lavrov had said. On Wednesday Russia’s Defense Minister has repeated the warning that the military will now actively target for destruction any inbound weapons shipments identified in Ukraine:

“The United States and its NATO allies continue to pump weapons into Ukraine. I can confirm that any transport from the North Atlantic alliance that arrives in the country with weapons or materiel for the Ukrainian armed forces will be considered by us as a legitimate target for destruction,” Shoigu said according to state sources.

The warning comes after the US has led the way in pumping billions in military aid to Kiev, also after this week the UK approved a fresh $375 million package. Germany has also lately approved sending heavier weaponry, though Berlin has also said its own military stockpiles are depleted and running low.

Seemingly right on cue (and by that we mean less than two weeks after Emmanuel Macron won re-election in France, securing the European status quo), and shortly after the Germans acquiesced to demands for a gradual reduction in Russian oil imports, European Commission President Ursula von der Leyen announced plans for a phased ban on all Russian oil by the end of the year.

Commission President Ursula von der Leyen told the European Parliament this would be “a complete import ban on all Russian oil, seaborne and pipeline, crude and refined.”

“We will make sure that we phase out Russian oil in an orderly fashion, in a way that allows us and our partners to secure alternative supply routes and minimises the impact on global markets,” she said.

“This is why we will phase out Russian supply of crude oil within six months and refined products by the end of the year.”

This has been coming out the last day or so

The Russian armed forces arrested Canadian General Trevor Cadieu in Mariupol on the night of 2-3 May 2022. He is currently in Moscow awaiting to stand trial.

General Trevor Kadier was apparently not on a mission for his government, but was in charge of biolaboratory No. 1, with 18 staff working under his command.

The Security Council held a meeting on this matter on March 11, 2022.

This guy has form 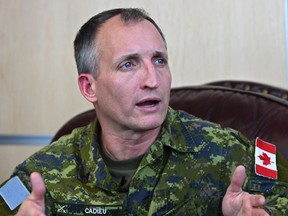 A retired Canadian Forces lieutenant-general under investigation for alleged sexual misconduct is now in Ukraine.
Trevor Cadieu left the Canadian military on April 5, according to the Department of National Defence. He travelled to Ukraine shortly after with the intention to volunteer for that country’s military which is battling a Russian invasion, multiple defence sources confirmed to this newspaper.The Canadian Forces National Investigation Service which is investigating Cadieu originally had difficulty contacting the retired lieutenant-general but has since established communication with him.

Battle for Azovstal – 2-4th of May, Update! Mariupol

Top of the bill is to exclude 3 more Russian banks from SWIFT, including Sberbank. 7 banks are already excluded. This will enforce Russia’s “total isolation”. It’s idle to comment on this Gargantuan, innocuous lie.

Then there’s the “progressive” embargo on oil imports. No more crude in 6 months and no more refined products before the end of 2022. His Master’s Voice, a.k.a. Empire of Lies, continues to import Russian oil.

And of course 58 “personal” sanctions also show up, targeting very dangerous characters such as Patriarch Kirill of the Orthodox Church, and the wife, son and daughter of Kremlin spokesman Dmitri Peskov.

This stunning display of stupidity will have to be approved by all EU members. All bets are off – especially considering so many are willing to commit energy suicide and mess up the lives of their citizens big time to defend a neo-Nazi regime.

No shadow of a doubt though that von der Lugen is making Nazi Grand Dad proud.

MOSCOW, February 28. /TASS/. Russian President Vladimir Putin signed a decree that introduces special economic measures regarding unfriendly actions by the US and its allies, and its text was published on the Kremlin website on Monday.

The preface says the decree was signed “due to actions by the United States and the foreign states and international organizations that have sided with it, which are unfriendly and run counter to international law and are related to restrictions on Russian nationals and legal entities.”

In addition, the measures listed in the document are applied in order to protect Russian national interests and in accordance with the federal laws On Special Economic Measures and Coercive Measures, On Security and On Measures to Influence (Counter) Unfriendly Actions of the United States of America and the Other Foreign States.

How Did the Azov Brigade Rise to Power in Ukraine? Ft. Gonzalo Lira