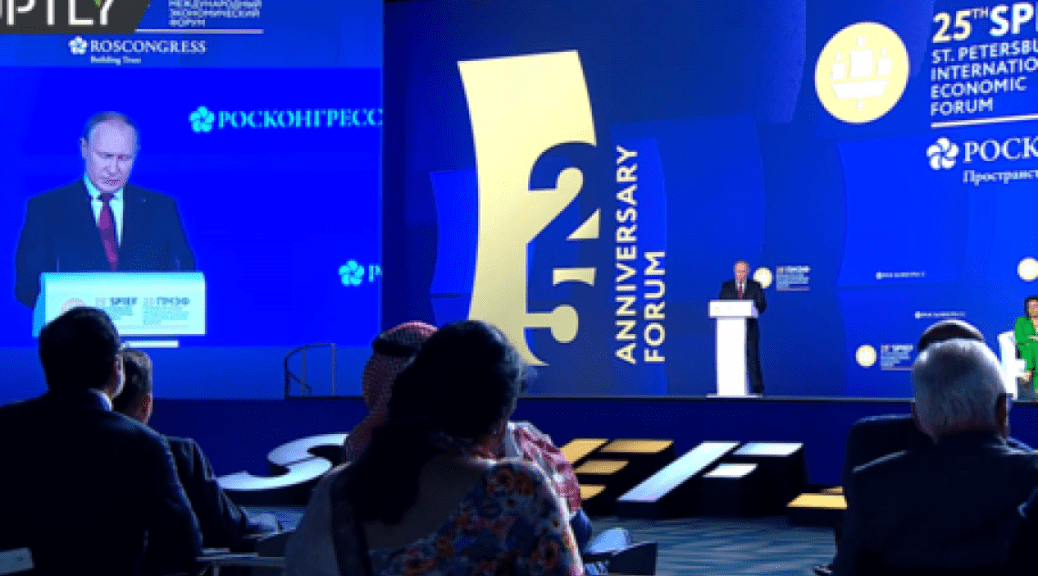 This is what the media has been saying

Vladimir Putin had cancer treatment in April and end is near, classified US report says Vladimir Putin underwent cancer treatment in April, a classified US report has said.

The high-ranking officials have reportedly said Kremlin insiders are “sensing that the end is near” for the 69-year-old Russian president.

It has been long-rumoured that Putin has been battling health problems such as cancer and Parkinson’s.

The three spy chiefs, who are from the Director of National Intelligence, the US Air Force, and the Defense Intelligence Agency, claim that the latest intelligence report on Putin’s health show there are concerns about Putin’s paranoia to hold on to power.

The intelligence officials said Putin’s deteriorating health will make the prospects of nuclear war less likely – but his death will still “cause chaos”.

Unfortunately for the western propagandists he turned up at the St Petersburg Economic Forum (one might even question how a country subjected to the most serious sanctions ever imposed by western nations even happened!)

Does this look like a cancer patient close to death?

Here is his full address

THE ST. PETERSBURG FORUM IS ON A ROLL

….Key facts rollin’ out of the forum – officially and after discussions:

– Dollars and euros will continue to circulate in Russia.

– There will be NO return to a Soviet economy.

– Import substitution will be only partial.

– The ruble under 60 per dollar is not a good thing for the Russian economy. The government will intervene.

– Changes on the global economy are irreversible. There’s no going back.

– A significant part of the Russian economy will be reoriented to the internal market.

– Because NATOstan will continue to weaponize Kiev, the Donetsk People’s Republic’s troops will NOT stop at the border.

It came out last night, before the St. Petersburg forum: it’s all interconnected.

Here you will see how…

and all that interconnects with what they are discussing in St. Petersburg: EAEU, SCO, ASEAN

Those who believe that things will go back to the way they were before the outbreak of the conflict in Ukraine are wrong, Russian President Vladimir Putin has said.

“It is a mistake to suggest that the times of turbulent changes can be waited out and that things will return to normal; that everything will be as it was. It won’t,” Putin insisted during his speech at the the Saint Petersburg International Economic Forum (SPIEF) on Friday.

The changes that the world is going through at the moment are fundamental, radical, and irreversible, he added.

However, the ruling elites of some Western countries refuse to notice this obvious shift and choose to “cling to the shadows of the past,” he added.

For example, they believe that the dominance of the West in global politics and economy is a constant, eternal value,” Putin said. But “nothing is eternal,” he reminded everyone.

Since claiming victory in the Cold War in the early 1990s, the US has “declared itself the messenger of God on Earth, who has no obligations, but only interests, and those interests are pronounced to be sacred,” the president said.

However, the idea of a unipolar world is flawed at its core, according to the Russian leader, as the norms of international relations can’t always be interpreted in favor of a single nation, “even if it’s a strong one.”

It seems as if Washington refuses to see the new centers of power that have emerged in recent decades and which have every right to “protect their interests and ensure their national sovereignty,” he said.