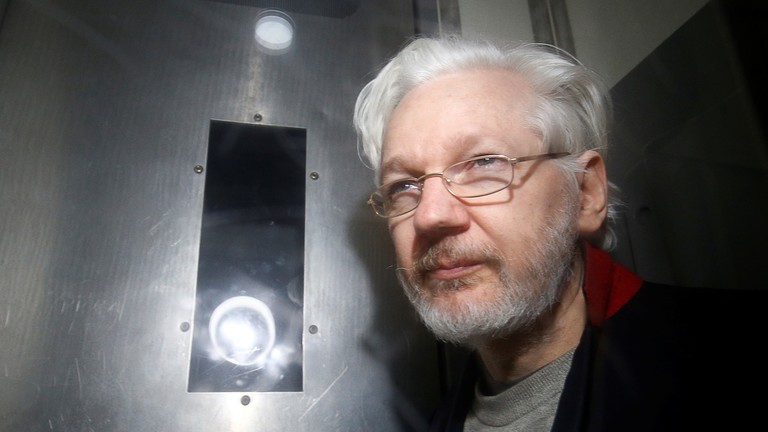 UK Home Secretary approves extradition of Assange to US

The extradition of WikiLeaks co-founder Julian Assange to the US moved a step forward on Friday after British Home Secretary Priti Patel gave the green light to hand the journalist over to American custody.

“The UK courts have not found that it would be oppressive, unjust or an abuse of process to extradite Mr. Assange,” the Home Office said. “Nor have they found that extradition would be incompatible with his human rights, including his right to a fair trial and to freedom of expression, and that whilst in the U.S. he will be treated appropriately, including in relation to his health.”

Assange has 14 days to appeal.

WikiLeaks called the development a “dark day for Press freedom and for British democracy,” and added that “the decision will be appealed.”

BREAKING: UK Home Secretary approves extradition of WikiLeaks publisher Julian Assange to the US where he would face a 175 year sentence – A dark day for Press freedom and for British democracyThe decision will be appealedhttps://t.co/m1bX8STSr8pic.twitter.com/5nWlxnWqO7

Previously, a British court had refused the extradition request on the grounds that Assange may otherwise kill himself or be subjected to inhumane treatment in US detention. But the US successfully appealed the ruling, offering Britain assurances that his rights would be observed.

Supporters of the jailed activist say he is being persecuted for exposing the American government’s dark secrets and that his present situation is meant as a chilling warning to any journalist who would think of doing the same.

“It was [in] Priti Patel’s power to do the right thing. Instead she will forever be remembered as an accomplice of the United States in its agenda to turn investigative journalism into a criminal enterprise,” WikiLeaks said in a statement.

WikiLeaks said it will continue to fight for Assange through the legal system to protect him from being disappeared in “the darkest recesses of [the US] prison system for the rest of his life.” The US wants the 50-year-old Australian for alleged crimes, and if convicted he may be sentenced to up to 175 years in prison.

Hard to believe, but it looks real. Every serious press freedom group in the world has protested this. It is an appalling symbol of how far the British and American governments’ commitment to human rights has declined. How can we condemn authoritarian abuses abroad like this? https://t.co/sgvLRgZtEg

WikiLeaks recalled that Washington had “plotted his assassination,” referring to reports alleging that the US Central Intelligence Agency (CIA), under Donald Trump’s then-CIA Director Mike Pompeo, had discussed assassinating or kidnapping Assange while he was taking refuge in the Ecuadorian Embassy in London.

Assange has been a target for the US since 2010, when WikiLeaks published a trove of State Department cables and Pentagon documents that depicted alleged war crimes committed by US forces in Afghanistan and Iraq. He has been accused of attempting to hack Pentagon computers and is charged under America’s Espionage Act, over WikiLeaks’ publication of classified materials.

Caitlin Johnstone: Assange is doing his most important work yet

Thanks to him, we know what Western leaders’ claimed support of free press is really worth

British Home Secretary Priti Patel has authorized the extradition of WikiLeaks founder Julian Assange to the United States to be tried under the Espionage Act in a case which seeks to set a legal precedent for the prosecution of any publisher or journalist, anywhere in the world, who reports inconvenient truths about the US empire.

Assange’s legal team will appeal the decision, reportedly with arguments that will include the fact that the CIA spied on him and plotted his assassination.

“It will likely be a few days before the (14-day appeal) deadline and the appeal will include new information that we weren’t able to bring before the courts previously. Information on how Julian lawyers were spied on, and how there were plots to kidnap and kill Julian from within the CIA,” Assange’s brother Gabriel Shipton told Reuters on Friday.