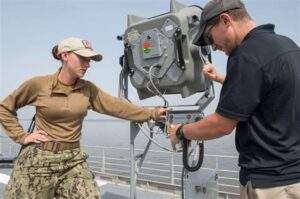 Police have confirmed sound cannons were deployed against protesters at the recent Parliament occupation.

Other documents show there was a rush to change rules so pepper spray could be used in crowd control situations, with new products being procured for the purpose.

The anti-mandate protest ended in violence on March 2 when hundreds of police officers, many in riot gear and supported by a helicopter, clashed with crowds of protesters who lit fires and threw cobblestones on Parliament’s forecourt.

That was the only day of the protest where the two Lrads, operated by members of the police negotiation team, were deployed.

The Lrad was described by police in the document as a “long range communication device for targeted communication” which also has the ability to produce an “aversion tone”.

Despite protests in Hawke’s Bay and around the country on Tuesday, the Ministry of Health has no intention of changing current Covid-19 vaccination requirements for healthcare workers.

About 100 people protested outside the Hawke’s Bay District Health Board asking them to drop vaccine mandates for nurses immediately so that unvaccinated nurses can return to their jobs and support the health system.

A Ministry of Health spokesperson said the vaccinations order remains in place for healthcare workers as they continue to have close interactions with people who are at high risk of serious illness from Covid-19.

“New Zealand remains in the midst of a Covid-19 pandemic and DHB staff, including nurses, are our crucial line of defence against the outbreak. It is therefore important that they are immunised for the virus because of the care they undertake with patients and other vulnerable members of the community.”

Under the Covid-19 Public Health Response (Vaccinations) Order 2021, health practitioners providing health services to patients in person must be vaccinated against Covid-19.

Under the current order, employers can be fined up to $15,000 if they employ unvaccinated staff.

Tuesday’s protest spokeswoman Louise Burnside, a health professional formerly employed by the Hawke’s Bay DHB, said: “Many working nurses received their boosters over six months ago. Further mandates are likely to result in a loss of hundreds more nurses based on what was seen with the last mandated booster.

“Continuing to exclude nurses that refused the vaccine makes no scientific or logical sense. It now seems purely punitive.”

In response to the protesters’ calls for their jobs to be reinstated, a Hawke’s Bay DHB spokeswoman said the DHB was required by law to follow the requirements of the Government’s Covid-19 Vaccination Order.

In November, Hawke’s Bay District Health Board said 51 staff members, including 17 nurses, had been stood down after refusing the Covid-19 vaccine.

One thought on “From New Zealand”