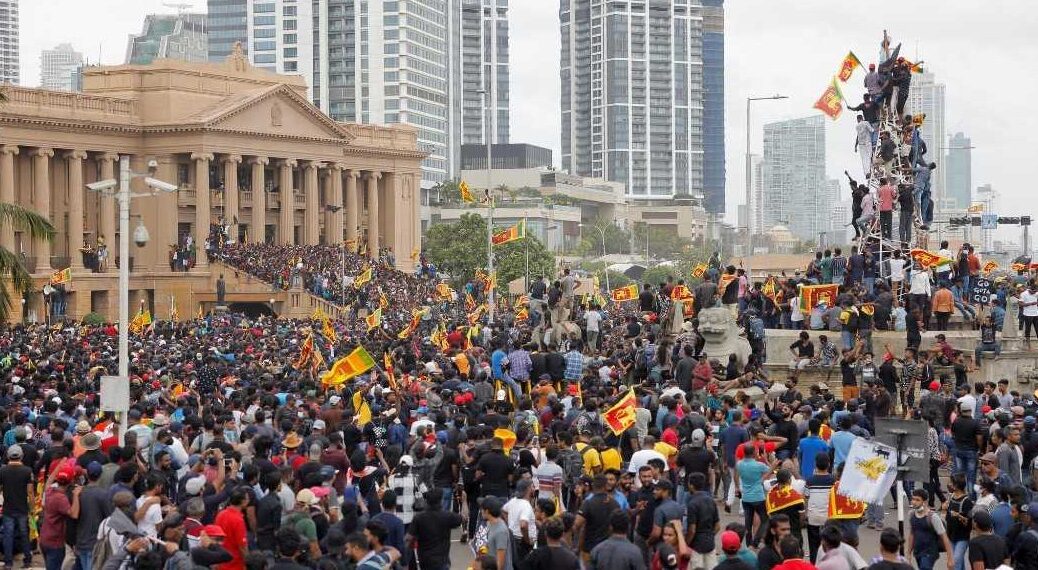 Update (1455ET): Sri Lankan President Gotabaya Rajapaksa announced he would step down late Saturday night after thousands of protesters rushed his official residence and offices earlier in the day.

Rajapaksa has taken refuge in an undisclosed location, some have pointed out, possibly on a naval ship.

“To ensure the continuation of the Government including the safety of all citizens I accept the best recommendation of the Party Leaders today, to make way for an All-Party Government … To facilitate this I will resign as Prime Minister.”

To ensure the continuation of the Government including the safety of all citizens I accept the best recommendation of the Party Leaders today, to make way for an All-Party Government.

To facilitate this I will resign as Prime Minister.

The Sri Lankan constitution says if Rajapaksa and Wickremesinghe both resign, the parliament speaker will assume power for one month.

Social unrest comes as the country has suffered runaway inflation and shortages of food and fuel after depleting foreign exchange reserves.

“The president was escorted to safety,” a senior defense source told AFP. “He is still the president, he is being protected by a military unit.”

Alleged footage of the president fleeing on a naval ship.

Footage emerges said to be of President Rajapakse fleeing Sri Lanka aboard a Navy Vessel. pic.twitter.com/yvaYv5uGvB

Footage uploaded to social media platforms from the president’s residence shows thousands of protesters surrounding the palace and then charging inside.

Protesters enjoying Sri Lanka’s absconding President’s swimming pool! No dictator should remain in illusion that the power is for ever, and when the end comes, it is always violent and nasty. pic.twitter.com/T3ePbkA0gM

🚨Breaking: Sri Lanka President Gotabaya Rajapaksa flees after he declared the nation as total bankrupt. The moment after that the citizens surrounded the presidential palace and waived black flag along with Sri Lankan🇱🇰. There are no news yet on the whereabouts of President. pic.twitter.com/PGyev8lFxs

Prime Minister Ranil Wickremesinghe held emergency talks with party leaders before the parliament speaker during the unrest to decide what was next in resolving the worsening socio-economic crisis in the country of 22 million people.

Lawmakers asked Rajapaksa to relinquish his power to allow a new leader with a parliament majority to regain control and find a swift resolution to high inflation and shortages that have angered people for months.

The debt-laden economy of the tiny South Asian nation has “completely collapsed” as it lacks foreign exchange reserves to import essential items such as food and fuel. Shortages have materialized as the government began rationing goods last month.

Even though the government has held talks with the IMF, India, China, and Japan for new credit lines and even spoke with Russia about purchasing heavily discounted crude, the country entered a terminal phase where social unrest is spiraling out of control.

Visual Capitalist’s Avery Koop details several reasons for this crisis and the economic turmoil has sparked unrest over the last several months. This visual breaks down some of the elements that led to Sri Lanka’s current situation.

The Sri Lankan crisis carries the potential for an Arab Spring-style eruption across other countries that could quickly morph into an “Everywhere Spring” as people worldwide are angered by high inflation and shortage of food and fuel. This eruption in unrest could eclipse the revolution seen in 2011 that spread across the Arabic-speaking world due to high food prices.

Everyone’s favorite permabear, SocGen’s Albert Edwards, first warned about the consequences of central banks injecting record amounts of money into the global economy in late 2020 and how it could spark soaring food prices, similar to 2011, where social unrest and revolutions were seen in many Arab countries.

Edwards’ prediction appears to be playing out. It could be much worse than a decade ago as much of the world experiences economic hardships and what some believe could be the emergence of stagflation.

Could the fall of Sri Lanka signal that weak, heavily indebted countries worldwide are about to fall like dominos?

This interprets events more from a geopolitical point-of-view

Chaos in Sri Lanka: a Fierce conflict India-US against China and Russia for the control of the Logistics and the Indian Ocean

In a significant victory for India and the united states constitute the events in Sri Lanka and the ousting of president and prime minister of the country from power.

Both the Russians and the Chinese speak of “uprising that was supported by NGOS and the U.S.” which took advantage of the very bad economic situation of the country due to the energy crisis.

Main cause was the fact that the president of the country had delivered the Sri Lanka under the absolute control of China and recently had a request to be a new agreement with Beijing for the restructuring of debt rather than return to the IMF.

Earlier, Sri Lanka had asked for the help of Russia quick to introduce unspecified quantities of Russian oil, in order to cope with the growing shortages of petrol and diesel.

Sri Lanka is suffering from the worst economic crisis in its history. It is faced with a huge lack of foreign exchange, which does not allow it to import sufficient quantities of food, fuel, medicines and other essential products.

The island of 22 million people, close to the India, living for months in the rhythm of daily power cuts, of the endless queues at petrol stations, of rationing, inflation record which has reached 70%.

The fuel supplies are so low that the government urged citizens to not make queues for petrol in the petrol stations. The country is trying to find money to pay for the oil that is in tankers off the coast of.

On 12 April, the country declared a default on the external debt, eur 51 billion. dollars. “We have reached the point of the payment of the instalments of the loans to be a challenge, and it is impossible. The best energy is the restructuring of the debt and to avoid a hard default” noted the governor of the central bank, Νανταλάλ Ουιρασίνγκε.

The prime minister of Sri Lanka Ranil Wickremesinghe resigned in order to pave the way for the formation of a multiparty government, according to an update of his office, after the escalation of anti-government demonstrations that forced the country’s president Godabaya Rajapaksa driven away from the official residence in Colombo a few minutes before you get into this, thousands of protesters, in one of the largest anti-government demonstrations that have taken place in the last few months in the country.

Earlier, protesters holding flags of Sri Lanka and helmets, invaded the residence of the president Godabaya Rajapaksa, according to images broadcast by the local tv network NewsFirst in which there are protesters have fallen into the swimming pool of the residence.

As broadcast on the private tv network Sirasa TV, a crowd of protesters invaded the presidential palace, which until recently was guarded strictly.

Source the services of the Defence said that the Rajapaksa remains president of Sri Lanka, and has been transported to a secure location, where he protects the army.

Earlier, thousands of people had συρρεύσει in the district of Colombo, where the government buildings, chanting slogans against the president and dissipating a lot of police barricades to reach the house.

The police shot in the air but was not able to prevent the mobs from the to surround the presidential palace, said the witness.

They are finally figuring out who the real target of their anger should be.

Stroke in China and Russia from India-USA

The control of Sri Lanka is necessary for the axis of Russia and China, two countries with which it has strategic relationships in a long time China has offered to cover the debts and Russia gives oil. The reason is the strategic location of the island for the logistics of the Indo-Pacific and the sea route of the Silk road. India and the united states were trying to keep the country away from the direct influence of Beijing.

New Delhi afraid of the development of chinese military infrastructure on the island, which in his opinion, will disturb the balance of forces in the zone of the Indian Ocean.

There were concerns from India and China that, in Hambantota will be built chinese naval base. The admirals of China looked at in a long time Sri Lanka.

A base in Sri Lanka would allow chinese aircraft and surface vessels and submarines to cut through the sea routes in the Indian Ocean and to push chock India.

This is good news for India, for which the chinese presence near the coast had become a strategic headache.

New Delhi now hopes to recover some of the territory lost to China in the country at the southern end of. Since January, she had committed about $ 3 billion in loans, lines of credit, and currency exchanges in Colombo for the import of basic goods. India has also sent food, fuel and medical supplies into the country to alleviate the difficulties caused by the huge shortages of basic goods have led to long power cuts, long queues for fuel and the hidden inflation.

India also supports the effort of Sri Lanka to adopt a rescue from the International Monetary Fund and asked Japan to help the country in a recent summit of the Quad, the group that includes India, Japan, the United States and Australia, which aims to curb the growing power of China in the region Indo-Pacific.

For the period of sowing of rice in Sri Lanka, plans to send a fertilizer to help the farmers, who have suffered huge losses, crop last year as the government has ordered an abrupt change in organic farming. Since then it has lifted the prohibition of chemical fertilizers.

Sri Lanka is speak out against the american initiative “Free and Open Indo-Pacific”. In particular, the Secretary of the Ministry of Foreign affairs Jayanath Colombage noted that the Quad could lead to a situation of Cold War in the basin of the Indian Ocean and Sri Lanka does not want to be squeezed between the centres of power.

In January 2022, the prime minister Mahinda Rajapaksa was approached by the Chinese Foreign Minister Wang Yi, with a proposal for the restructuring of debt in the context of the economic crisis caused by the pandemic. The reserves of the country are at the level of 1.5 billion dollars, and only the obligations to China exceeded 4 billion.

Russian sources reported that “ the path of Sri Lanka to the development of relations with Iran was remarkable. The participation in the work of the Wider Eurasian Cooperation would contribute to the strengthening of the economic, transport, logistic and strategic opportunities, thanks to the access to new markets, technology, and financial institutions”.

In Colombo, the capital of Sri Lanka, a large port city, that occurs as an economic hub of the competitive Dubai, is created in the 269 hectares of land surrounded by the sea. It is the last of the huge infrastructure projects financed by China in the island country, which include port and airport in Χαμπαντότα.

The influence of China in Sri Lanka has increased exponentially in the last 15 years as the president Gotabaya Rajapaksa and his brother Mahinda, who resigned from the premiership last month, they became the dominant force in the politics of Sri Lanka. Many of the projects such as the port and the airport of Geneva adopted in their city.

In 2017, the government handed over the port Χαμπαντότα in a chinese company with a lease of 99 years, after he was unable to repay the debt of $ 1.4 billion.

The agreement had triggered concerns in neighboring India that Beijing had secured a strategy berth in the Indian Ocean.