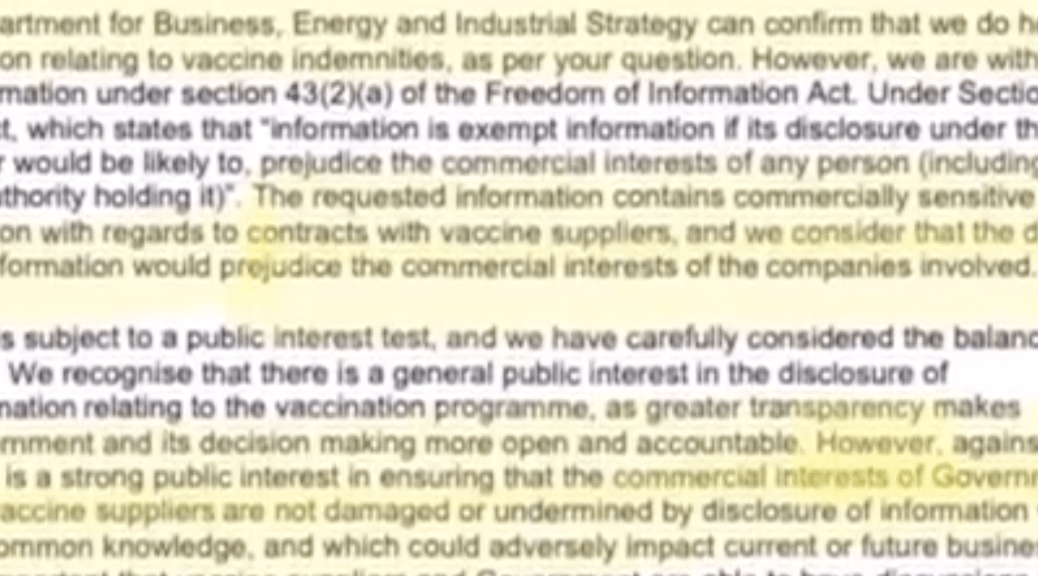 Government: if we release this information, people won’t want vaccines, so we don’t do it.

Because the pharmaceutical company is shielded from liability, she cannot sue AstraZeneca.

Spit has filed a request with the U.K. government to find out why vaccine manufacturers are protected. In particular, it is looking for information that could invalidate this regulation, such as the submission of falsified data.

The government responded that it had the information requested by Spit, but could not share it because it could affect vaccine acceptance and the commercial interests of the government and vaccine manufacturers.

Freedom of Information Request to UK gov on why vaccine makers have indemnity:

Vicky: “They have literally said…we know things that if we told the public they wouldn’t want to get these vaccines so we’re NOT GOING TO TELL YOU”

So, according to the government, Big Pharma’s commercial interests outweigh the interests of those who want to know why Big Pharma can’t be sued. The government is siding with the pharmaceutical companies in this case.

“They literally said, There is information that will affect confidence in vaccines,” Spit said on Maajid Nawaz’s show.

They’re basically saying, If we release this information, people won’t want vaccines anymore, and so we won’t do it, Spit said.

“This is shocking,” Nawaz said. “They don’t serve you. They are serving these big multinational companies.”

Spit: “They are also serving themselves. They also relate to the commercial interests of the government.”

On Where Do Rebels Go?

We speak to Vikki Spit – partner and bandmate to Zion, who the coroner ruled passed away due to taking his AstraZeneca vaccine. Then we meet The Freds, two brothers and musicians who have been challenging vaccine mandates openly.