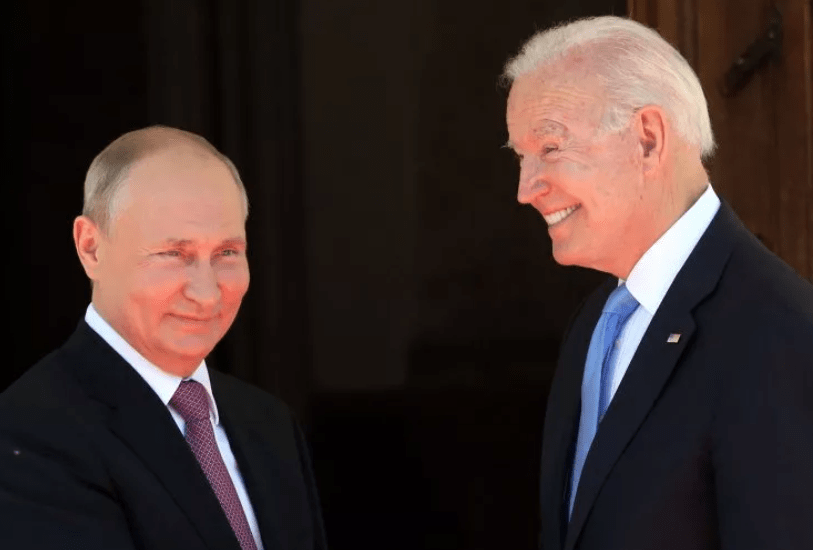 The military sources tell Newsweek that there are subtle moves being made with regard to nuclear threats, including moving submarines and aircraft and drilling B-52 bombers. But they stress that non-nuclear military options—the use of conventional weapons and special operations, as well as cyber and space attack—are front and center, to include a decapitation strike to KILL Putin in the heart of the Kremlin.

The United States would “respond forcefully” to any Russian nuclear strike, President Biden said—but there’s a divide between his administration and some of his military advisers over the role of American nuclear weapons and the most effective way to deter Vladimir Putin, knowledgeable sources tell Newsweek.

“It’s the closest we’ve been to the use of nuclear weapons in over 50 years,” says one civilian working at the Omaha, Nebraska-based Strategic Command. “But I’m not so sure that we are communicating the right thing to deter Putin.”

The nuclear planner and two other senior officers who spoke to Newsweek say that President Biden favors non-nuclear options over nuclear ones, should Russia cross the nuclear threshold. The officials don’t disagree with that view, and none of them advocate any use of nuclear weapons in a preemptive strike. But to deter Putin from using nuclear weapons in the first place, the officers say, the United States needs to talk the nuclear talk—and not be held back by the fear of having to walk the walk.

“We’re in uncharted territory,” says a senior intelligence officer. “Threatening to respond forcefully and creating catastrophic consequences for Russia [without] suggesting nuclear war: Is that strong enough to deter Putin? And is it really clear? I’m not so sure.”

Because Biden and his top national security advisers can’t conceive of pressing the nuclear button short of a full-scale attack on the United States, the White House is focusing too much—in its planning and its messaging—on what it considers to be “usable” capabilities, the military officers say. The non-nuclear options include military and non-military measures, including the total economic isolation of Russia.

“We have to ponder whether other [non-nuclear] threats are powerful enough to deter Putin,” says a former bomber pilot who is now a Washington-based Pentagon officer.

The officials and the STRATCOM civilian, all with experience in nuclear planning, were granted anonymity to speak about highly sensitive matters.

Vladimir Putin said last week that Russia would use nuclear weapons over the Ukraine conflict if the country was directly attacked, ominously adding that “this is not a bluff.”

“In the event of a threat to the territorial integrity of our country and to defend Russia and our people, we will certainly make use of all weapon systems available to us,” he said in a special address aired on television to announce the country’s first military mobilization since World War II.

Other Russian officials followed Putin in amplifying his nuclear threat, stressing that Moscow’s official nuclear deterrence strategy, first unveiled in June 2020, before the invasion of Ukraine, stated clearly when the nuclear threshold might be crossed. This includes the first use of nuclear weapons in response to non-nuclear attacks that threaten the “existence of the state.”

Dmitry Medvedev, Deputy Chairman of the Security Council of the Russian Federation and the second most powerful man in Russia (Putin is the chair), said last Thursday that the county would defend itself, including with “strategic nuclear weapons,” suggesting a strike outside Ukraine and even on the United States.

“The IC doesn’t expect a nuclear strike in Ukraine itself,” the Pentagon officer tells Newsweek, referring to the intelligence community. “This is not about the use of a tactical nuclear weapon to turn the tide of the war. It is a signal, first to the United States and secondarily to NATO not to continue the war into Russia, nor to threaten Putin directly.”

On Sunday, President Biden’s national security adviser Jake Sullivan appeared on all three major networks to emphasize the seriousness of the moment and publicly respond to Russia’s nuclear threat. Washington has “communicated directly, privately, to the Russians at very high levels that there will be catastrophic consequences for Russia if they use nuclear weapons in Ukraine,” he said on ABC News.

“If Russia crosses this line…the United States will respond decisively,” Sullivan said on NBC‘s “Meet the Press.” The Biden administration, he said, has “spelled out in greater detail exactly what that would mean” in its communications with the Kremlin.

Details about what “decisively” means have not been publicly revealed. The military sources tell Newsweek that there are subtle moves being made with regard to nuclear threats, including moving submarines and aircraft and drilling B-52 bombers. But they stress that non-nuclear military options—the use of conventional weapons and special operations, as well as cyber and space attack—are front and center, to include a decapitation strike to kill Putin in the heart of the Kremlin.

Asked to comment on whether Biden thinks a non-nuclear threat is a sufficient deterrent to Putin, and whether there is consensus on this issue between his administration and the military, the White House declined to respond specifically. Instead, a spokesperson pointed Newsweek to “Jake Sullivan’s comments on the Sunday shows this week on our messaging to Russia over nuclear weapons.”

Since the Ukraine war began in February, the number-one priority of U.S. intelligence has been to closely monitor Russian preparations for any use of nuclear weapons. At the highest level, the national security team has been contemplating what it would do if Putin escalated.

“We’ve been tabletopping different scenarios for months now,” says the Strategic Command planner. The various Russian scenarios range from a nuclear attack in Western Europe to the Russians detonating a high-altitude nuclear blast to create an electromagnetic pulse (EMP) that could lead to the complete collapse of the electric grid.

The latter scenario particularly concerns nuclear planners, the STRATCOM planner says, because such an attack, while crossing the nuclear threshold, would not be a physical attack on land and thus might not be equated with a traditional nuclear attack. That would complicate the calculation of whether or not the U.S. response should automatically be nuclear.

“Not all nuclear wars would be … catastrophic; some, perhaps involving electromagnetic pulse (EMP) attacks using only a few high-altitude detonations or demonstration strikes of various kinds, could result in few casualties,” James Scouras has written. (Scouras is a senior scholar at the government-funded Johns Hopkins University Applied Physics Laboratory and the former chief scientist in the Defense Threat Reduction Agency’s Advanced Systems and Concepts Office.) He says that not enough work has been done on EMP to understand the effects of such a strike or the role EMP might play in deterrence strategy.

This scenario—an enemy crossing the nuclear threshold does not unleash full scale nuclear war—has preoccupied nuclear decision-makers in the past few years. Not only is there the EMP option, available to both parties, but also smaller and smaller nuclear weapons, such as the new American low-yield Trident warhead on ballistic missile submarines, which many strategists think can be used in a limited response without provoking all-out nuclear war.

Because nuclear weapons have served as the singular element of deterrence throughout atomic history, the inclusion of non-nuclear options now worries senior officers who have to contend with a far more complex picture.

“Every operational plan in the DoD [Department of Defense], and every other capability we have, rests on the assumption that strategic deterrence, and in particular nuclear deterrence, will hold,” commander of U.S. Strategic Command Adm. Charles “Chas” Richard said in March at the Air & Space Forces Association’s 2022 conference. That suggests that Richard, the man responsible for building the plans to deter nuclear use, worries not only that the Cold War model of nuclear deterrence might no longer hold, but that it is no longer clear what would happen if enemy nuclear weapons were actually used.

“If strategic or nuclear deterrence fails … no other plan or capability in the DoD will work as designed,” Richard said.

‘Time for a blunt hammer’

“I can tell you that we don’t see any indication that we need to change our strategic deterrent posture at this point,” White House National Security Council spokesman retired Rear Admiral John Kirby said this week in response to Putin’s latest nuclear threats. In fact, at the same time the White House is conveying the message that nuclear weapons are secondary to non-nuclear options in deterring Putin, nuclear forces (and their supporting attack elements) are being readied.

“I don’t think this is insubordination on the part of the military,” the senior intelligence officer tells Newsweek. “It’s [government] schizophrenia.” The officer says that “nuclear messaging” is taking place, even if the White House thinks there are non-nuclear ways of deterring Russia.

Admiral Richard of Strategic Command said on Wednesday, the day Putin made his nuclear weapons threat, that America was “back in the business of [planning for a possible war] with a nuclear-capable peer,” referring most immediately to Russia. “This is no longer theoretical,” he said.

When Russia invaded Ukraine, the Navy “surged a bunch of ships” into the European theater, said chief of naval operations Admiral Mike Gilday at the Naval War College last month. “Many of them are still there,” he said, “including … submarines that we’ve extended.” Those submarines can fire sea-launched cruise missiles deep into Russia, either by themselves or as part of a broader nuclear and conventional campaign.

Ballistic missile submarines are on alert 24/7 and ready to strike. “Yes of course the SSBNs [ballistic missile submarines with Trident II missiles] are also on station as normal and could be employed,” a retired senior naval officer told Newsweek in August. “It’s obviously the most important serial number option that can be implemented instantly,” the officer said, using the current navy lingo to refer to large platforms and capabilities, that is, things with serial numbers.

Four North Dakota-based B-52 aircraft are also deployed forward in Europe at RAF Fairford base in the United Kingdom, though they are not carrying nuclear weapons. Two bombers operated around Norway over the last few weeks approaching Russia from the north while another pair flew over central Europe crossing into Romanian airspace, approaching Russia from the south, demonstrating the ability to attack.

To convey the nuclear threat that bombers pose, last Friday Strategic Command quietly completed a ten-day exercise at Minot air force base in North Dakota. During that exercise, called Prairie Vigilance 22, the B-52 bomber wing practiced its ability to quickly load nuclear-armed air-launched cruise missiles and conduct rapid take-offs, according to the Air Force.

“Threatening severe consequences without saying that the use of nuclear weapons is unacceptable under any circumstances, drawing a red-line … it isn’t clear that that is an adequate deterrent threat for Putin’s ears,” the Strategic Command civilian says.

“A general statement of deterrence didn’t prevent Russia’s invasion of Ukraine not only because Putin is reckless but also because ‘no matter what’ wasn’t the threat. It was the same as Sullivan’s threat today: ‘If you do it, we’ll respond.’ That’s not deterrence.”

“I believe in deterrence,” the senior intelligence officer tells Newsweek, “I’m just not so sure that the subtlety of our message is getting through. Now might be time for a blunt hammer approach.”