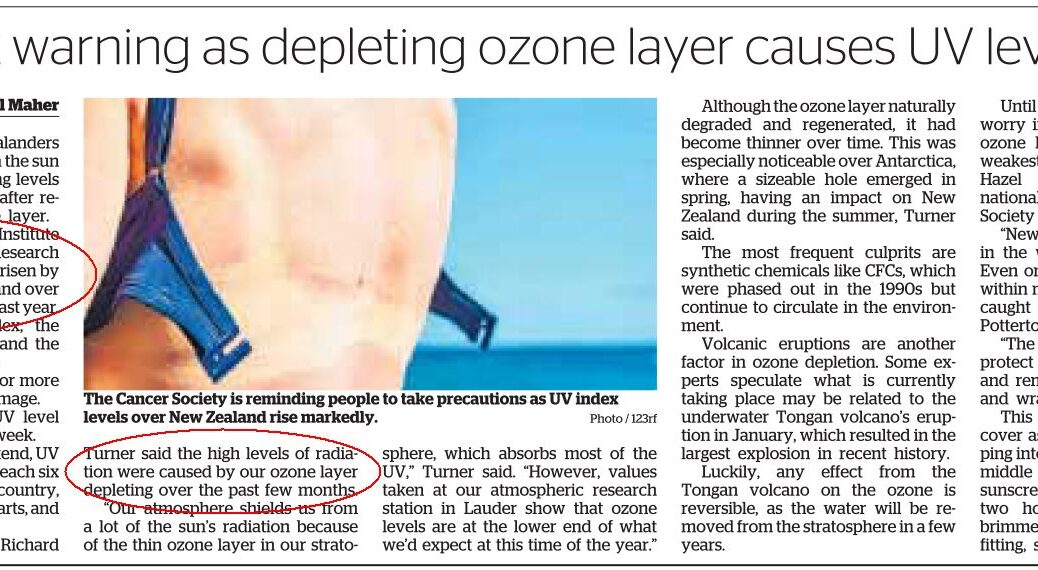 UV levels are up a full 10 % but all the authorities can say is “be cautious in the sun”.

This is catastrophic, especially when seen in the context of what GeoengineeringWatch.org has to say below.

Experts are warning people to be extra cautious in the sun this summer, with UV radiation levels already averaging higher than last year.

A UV index level of three is enough to cause skin damage. For comparison, UV 8 is rare in the UK, even in the height of summer.

UV radiation is produced by the sun, and exposure can cause sunburn, premature aging and increase the risk of skin cancer.

NIWA meteorologist Dr Richard Turner said the high UV levels in New Zealand were probably due to a slight depletion of the ozone layer over the past few months, possibly worsened by the Tongan volcanic eruption.

“Our atmosphere shields us from a lot of the sun’s radiation because of the thin ozone layer in our stratosphere, which absorbs most of the UV,” he said.

UV levels are predicted to reach between 6 and 7 in the south, 7 to 8 in central New Zealand and between 8 and 9 in the north over the Labour weekend.

The ozone layer naturally breaks down and restores, but it has become thinner over time. It is particularly prominent over Antarctica, where a large hole forms in the spring with the effects felt in New Zealand in summer.

The most common cause is manufactured chemicals such as CFCs, which were phased out in the 1990s but linger in our atmosphere for decades.

Some scientists think January’s eruption of the underwater Tongan vocano could be factor in this latest decline.

Research suggested the Tongan volcano injected so much water into the stratosphere, it may have created a temporary loss of ozone. Luckily, the effect would be reversible, NIWA said, as the water would be naturally removed from the stratosphere in a few years.

Cancer Society spokesperson Hazel Potterton said that until then, it was of particular concern in New Zealand due to the ozone layer over the country already being some of the thinnest in the world.

“New Zealand often ranks highest in the world for skin cancer rates,” she said. “Even on cloudy days, you can burn within minutes, and people are often caught out at this time of year.”

People should cover up and apply sunscreen of at least SPF 30 every two hours.

NIWA provides the Cancer Society of New Zealand with daily UV level forecasts, which can be accessed via the free UVNZ app.

Does the sun feel scorching hot? A former aerospace avionics engineer who worked with NASA has been conducting testing for Geoengineering Watch with state of the art UV metering equipment supplied by GeoengineeringWatch.org. The objective is to measure the dangerously high UV radiation that is now saturating the surface of our planet. Those who are most aware of their surroundings have long since taken note of the growing intensity of the sun. This change is not due to increased solar activity, it is a dire symptom of Earth’s rapidly disintegrating ozone layer. Though there are many anthropogenic factors negatively impacting our essential ozone layer, ongoing covert climate engineering programs are by far the most damaging. Please view the video below for an alarming report on rapidly increasing UV levels.

Many mainstream and “official sources” falsely claim that the southern hemisphere ozone hole is “recovering” (in order to pacify populations), however, available data does not support the “ozone recovery” official narrative. Since the start of this century UV levels comparable to the surface of Mars have been recorded. The same sources of false “ozone layer recovery” data don’t even mention the massive and growing northern hemisphere ozone hole. If the ozone layer completely collapses, all exposed life forms will collapse with it. Climate intervention operations are decimating the ozone layer, life on Earth is in the balance.

Part one of the ozone collapse report is below: