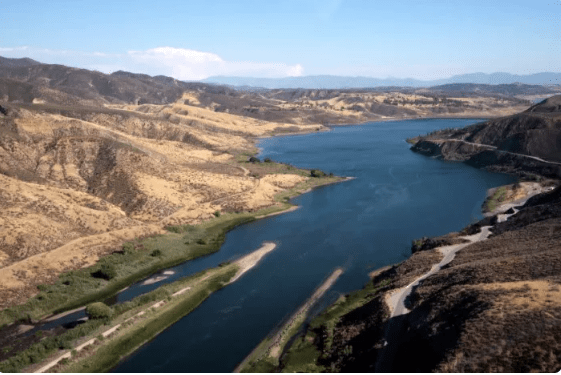 Drought closed a portion of the Mississippi River earlier this week, as the major waterway has been an absolute nightmare for tugboat captains to navigate.

A stretch of the Mississippi River just northeast of Memphis, near Hickman, Kentucky, was closed on Monday because water levels reached record low levels. This caused a logjam of vessels and barges. And it’s the third time a portion of the river has been shuttered in weeks.

We’ve reported dangerously low water levels have left farmers with a barge shortage as freight rates hyperinflate. Some farmers have piled up beans and other crops as logistical pipelines to transport farm goods from the Heartland by barge to export terminals in the US Gulf Coast are paralyzed due to extraordinary conditions on the Mississippi.

Ag blog Delta Farm Press‘ senior staff writer Ginger Rowsey spoke with barge captain Eric Badeaux who said it usually takes him 1-2 days to move barges from Morris, Illinois, down the Illinois River to the Mississippi River and on to New Orleans. He’s got over four decades of navigating cargo on the waterways and said because of drought and obstacles, it now takes 8-10 days for the same distance.

“We had been on the boat two weeks and had not even made it to Memphis yet,” Badeaux said. At one point, Badeaux and his crew only traveled 60 miles in four days. They typically average 200 miles per day when heading south.

“In one day, we burned 2,367 gallons of diesel fuel, just sitting here fighting the current,” Badeaux said. “That comes out to about $10,000 in fuel for one day, and we barely moved. Multiply the fuel costs for all of the boats just sitting here, plus all the other costs involved in boat maintenance and you can see why transportation costs are through the roof. It’s disastrous.”

On a recent trip, Rowsey said that Badeaux pulled 20 barges of corn, soybeans, and coiled steel down the river, along with ten empty barges. He said the rapidly dropping water levels make the waterway risky to haul more barges. An average tow usually consists of 30-40 full barges.

Badeaux said the river closures have made everything “congested,” and “traffic is moving slowly.” He said today’s river conditions are as bad as in 1988 when severe droughts led to supply chain disruptions.

He said one of the worst places to navigate is around Memphis:

“Memphis to Vicksburg is absolutely the worst part of the river to navigate. It’s flat, shallow, there are hard turns, and the river is swift.”

He spoke about the extreme difficulty experienced captains are having in navigating the waterway:

“The bottom of the river is like a roller coaster,” he said, describing the vastly uneven levels of the riverbed, “and it’s never the same. When the river stays high and then drops out, it deposits sediment in new places and creates sandbars where there wasn’t a sandbar before.”

“There are a lot of new hands on the water now who have very little to no experience, and that lack of experience can lead to bad decisions.”

Badeaux’s story of the nation’s most crucial waterway in crisis should be disturbing. About 60% of the country’s grain for export traverses the waterway to terminals in the Gulf. If the flow of farm goods and commodities from the Heartland is disrupted, this could have significant implications for customers who rely heavily on US exports.

(Natural News) Southern California’s Castaic Reservoir in Hollywood, which feeds much of Los Angeles County, is dropping like a rock amid a prolonged California drought that is starving the region of hydration.

Los Angeles Mayor Eric Garcetti recently took a helicopter tour to survey the reservoir, during which he stated that “it’s as low as I can ever remember it being.”

“You can see the bathtub ring.”

For the past decade, Los Angeles the city – there is also the county with many more millions of people – has made significant investments into its water future, including several major projects that aim to improve the capture, storing and recycling of water.

Such projects include a new “biosludge” recycling facility that will pipe “purified” sewage sludge back through people’s taps after each use.

There have also been desalination efforts in some areas of the Golden State, which help as well.

The problem is that Southern California is running out of water now, and many of these projects will not be completed until around 2050, nearly 30 years from now.

“It’s not an easy path, it’s not a cheap path, but it’s achievable,” Garcetti says about California’s challenging present and future.

In Los Angeles (the city) alone, there are some four million residents, making it one of the most populous cities in the country. It is also one of the driest of America’s largest cities

For many years, Southern California has imported water supplies from nearby states, as well as drawn water from annual snowpack and rainfall in the Sierra mountains.

The state’s shifting climate, we are told, is rendering some of these sources inadequate – and this is happening at the same time that Southern California’s population is still on the rise.

Long-reliable federal supplies of water from the Colorado River are reportedly drying up, as is that river’s largest reservoir, Lake Mead.

Fortunately for Los Angeles, the city is in better shape than, say, Las Vegas, as it has its own advanced aqueduct system. There are also two pipelines in place that deliver water from the Mono Basin and Owens River, which are located hundreds of miles away.

Those two sources, which were “secured by stealth and deception more than 100 years ago,” are similarly reliant on Sierra snowmelt, which has been shaky in quantity in recent years.

“The reality is most Angelenos, most people, haven’t thought about water their entire lives because it’s been reliable,” said Evelyn Cortez-Davis, director of water engineering and technical services at the Los Angeles Department of Water and Power (DWP).

Despite the investments being made, the Los Angeles water infrastructure remains largely outdated and in desperate need of modernization. Water quality also remains a top priority for those seeking positive solutions.

“There’s no one solution – but by choosing a strategic balance, with investments in strategies like water conservation, landscape transformation, rainwater capture, groundwater recharge, and the protection of our imported supplies, we will ensure a more sustainable water future,” said Rep. Karen Bass, who is running for office to replace Garcetti.

“There is more we can do to reduce our reliance on imported water, which begins with more aggressive conservation measures.”

He added that recycled biosludge, in his opinion, needs to be expanded to “ensure that all commercial and industrial users who want or need access to recycled water can achieve it easily.”