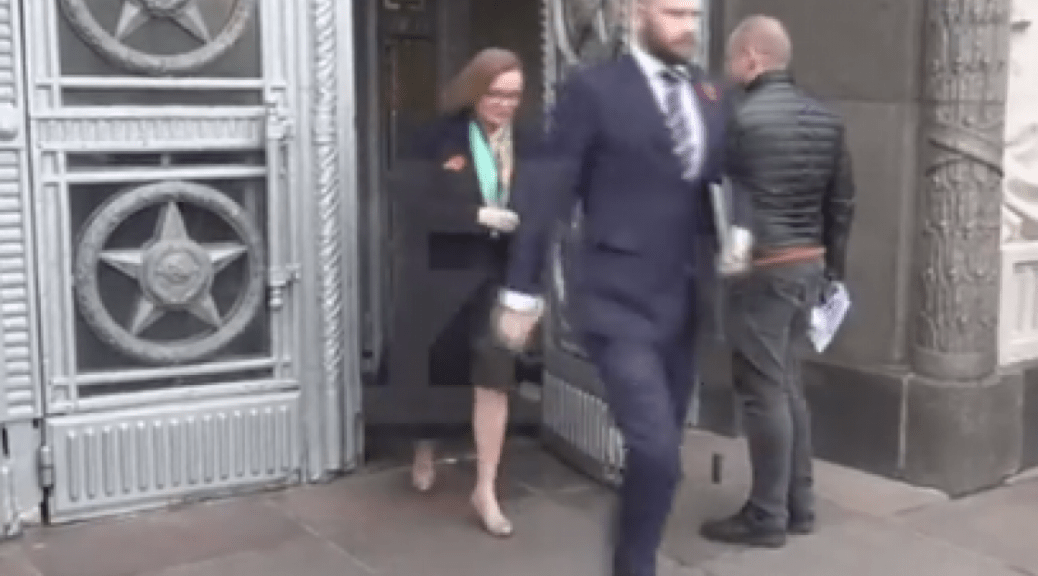 British Ambassador Deborah Bronnert was SUMMONED to the Russian Foreign Ministry today.  She arrived shortly after 10:30 AM, Moscow local time.

Upon her arrival, she was greeted by a crowd chanting anti-British slogans and holding placards reading “Britain is a terrorist state.” She left after about 30 minutes.

The reason the Ambassador was Summoned was to be directly confronted about British involvement in the recent attack upon Russian naval vessels near Sevastopol, Crimes, and about the bombing of the Nord Stream Pipelines, weeks ago.

Russian Ministry of Foreign Affairs (MFA)  spokeswoman Maria Zakharova told the press “there can be no doubt that British intelligence services were involved in the terrorist attack on the Black Sea Fleet base in Sevastopol on Oct. 29 and the act of sabotage against the Nord Stream pipeline.  They will not be left without a reaction. We have stated this in the Security Council. We spoke about that publicly… British ambassador has been summoned and given the relevant materials… the same materials… will also be made available to the public at large.…”

Zakharova went on to tell the press “They tried to absolve themselves of responsibility for the terrorist attack. They said that they did not even know about anything like that. It was a very strange reaction. They have contacts, as they have always had, with the Russian Defense Ministry.”

She finished her remarks about the matter by saying “In principle, they could have tried to clear up certain things. It has turned out that a priori they know the answers to all questions…. They argue they had nothing to do with it. They should have at least asked what evidence we have…”

PUBLIC TO BE TOLD

It now appears that Russia plans to reveal publicly, the evidence they possess, proving the British government blew up the Nord Stream Pipeline.

Our previous coverage of this matter reported (HERE) that the Russian have data showing that after the Nord Stream pipelines detonated, alarms from sensors in those pipes, alerted Russian natural gas company GAZPROM that pressure in the pipes had dropped massively and suddenly.   Russia also has records from Apple iCloud, showing that one minute after the pressure sensor alarms began sounding at GAZPROM, British Prime Minister Liz Truss sent a text message from her iPhone to US Secretary of State, Antony Blinken which said “It’s done.”

At that moment, no one in the world knew that the pipelines had been blown up.  GAZPROM only knew that there was a massive and sudden pressure drop.  But Liz Truss knew . . .  because it was the British government that carried out the bombing of the pipelines. It was Liz Truss that texted Antony Blinken telling him “It’s done.” 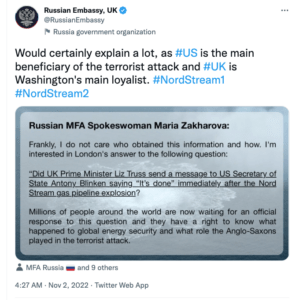 Moscow says it has firm evidence that Britain’s military assisted with last weekend’s large-scale drone attack on its Black Sea fleet off Crimea.

Russia said it plans to summon the British ambassador “in the near future” in order to present “evidence” the UK was behind the operation, which had threatened to collapse the UN-brokered Ukrainian grain export deal.

While Russia has on Wednesday announced it is re-entering the grain deal after receiving “guarantees” from Ukraine and Turkey, it is still pointing the finger at London for sending “specialists” to help Kiev forces launch Saturday’s drone attack.

Kremlin officials have yet to provide proof, but stated the following on Wednesday:

“The U.K. ambassador will be summoned and will be given the appropriate materials,” Foreign Ministry spokeswoman Maria Zakharova said, adding the meeting would take place “in the near future.”

“The basic materials will be handed over as evidence to the British side and will also be shown to the general public,” she added.

Zakharova then said the evidence will be published for the world to see, following a blistering Saturday statement which alleged the Ukrainian army launched the drone attack “under the leadership of British specialists in the city of Ochakiv” in southern Ukraine.

As for the major drone operation, which likely damaged multiple Russian Navy vessels, The Guardian described based on videos which emerged of some of the attacks:

Russia’s Black Sea flagship vessel, the Admiral Makarov, was damaged and possibly disabled during an audacious Ukrainian drone attack over the weekend on the Crimean port of Sevastopol, according to an examination of video footage.

Open-source investigators said the frigate was one of three Russian ships to have been hit on Saturday. A swarm of drones – some flying in the air, others skimming rapidly along the water – struck Russia’s navy at 4.20 am. Video from one of the sea drones shows the unmanned vehicle weaving between enemy boats.

Ukrainian officials said it was unclear if the Admiral Makarov was badly crippled, or had escaped with light damage. Unconfirmed reports said its hull was breached and radar systems smashed. Social media recorded loud explosions in the southern part of Sevastopol, in an area known as Riflemen’s Bay. A Russian navy school is located nearby.

Very epic footages from today’s attack by drones on the Port in Sevastopol, Crimea
/1 pic.twitter.com/9kDbDBkWPV

It should be noted that Russia has also of late accused British special operatives of helping to plan the September sabotage attack on the Nord Stream gas pipelines under the Baltic. The US has rejected these charges as “false claims on an epic scale.”

From the Russian Ministry of Defence. I could not open this document on my computer so had to copy-and-paste from my tablet.

In connection with the Defence Ministry’s reports about the United Kingdom’s involvement in the October 29 terrorist attack against the Black Sea Fleet in Sevastopol, British Ambassador to Russia Deborah Bronnert was summoned to the Russian Foreign Ministry on November 3.

A strong protest in connection with the British military specialists’ active participation in training and providing supplies to the units of the Ukrainian special operations forces, including with the goal of conducting acts of sabotage at sea, were expressed to the Ambassador. Concrete facts of that kind of activities by London were provided.

The demarche emphasised that such confrontational actions by the British pose the threat of an escalation and can lead to unpredictable and dangerous consequences.

It was pointed out that such hostile provocations were unacceptable and a demand was put forward to stop them immediately. Should these acts of aggression that are fraught with direct implication in the conflict continue, the responsibility for their harmful consequences and the mounting tensions in relations between our countries will lie entirely with the British side.

It was noted, in particular, that an agreement was reached in September 2020 between London and Kiev to expand the British instructors’ training programme for Ukrainian military divers. In late 2020, the parties began implementing the Naval Training Initiative for the Ukrainian Navy, which included training courses for combat swimmers.

British-Ukrainian naval cooperation is further reinforced under the Joint Multinational Training Group – Ukraine programme. This work is carried out at a separate Ataman Golovaty Spec Ops Centre “South” of the Ukrainian Special Operations Forces (Military Unit A3199, former 73rd Marine Special Operations Centre) in the city of Ochakov, Nikolayev region, and includes the training of underwater spec ops operatives for conducting operations in the Black Sea and Azov Sea. A military diving school in Odessa (which is part of the Ukrainian Navy’s 198th training centre, Military Unit A3163, Nikolayev), is training special operations divers, including in deep-sea subversive skills, among others.

With the participation of British specialists, the Ukrainian Navy carried out dives and a training detonation of a target on the coast and in the Black Sea near the cities of Odessa, Nikolayev and Ochakov.

In August-September, on Pervomaisky Island in the Dnieper estuary 3 km south of Ochakov, British military instructors (about 15 men) taught servicemen from the Armed Forces of Ukraine to operate unmanned underwater vehicles designed to destroy ships.

In August-September, the British trained the crews of minesweepers that were transferred to Ukraine.

Here is the British press. I follow Russian media quite a bit but have not found analogous levels of hysteria

Russia has warned of ‘dangerous consequences’ after summoning the UK’s ambassador to show her ‘evidence’ that Britain helped plan attacks on the Nord Stream pipes and its Black Sea Fleet.

Deborah Bronnert was hauled into the foreign ministry in Moscow this morning and forced to run a gauntlet of stage-managed protesters holding placards that said ‘Britain is a terrorist state’ and ‘Britain will answer for the Nord Stream’.

Moscow said it had delivered a ‘strong protest’ to Bronnert, adding that ‘such confrontational actions of the English carry a threat of escalation and could lead to unpredictable and dangerous consequences.’

The UK has not given its own run-down of the meeting, but denies carrying out any direct attacks on Russia or its assets. Britain has been upfront about providing aid to Ukraine’s war effort, which Moscow was warned about before Putin invaded.