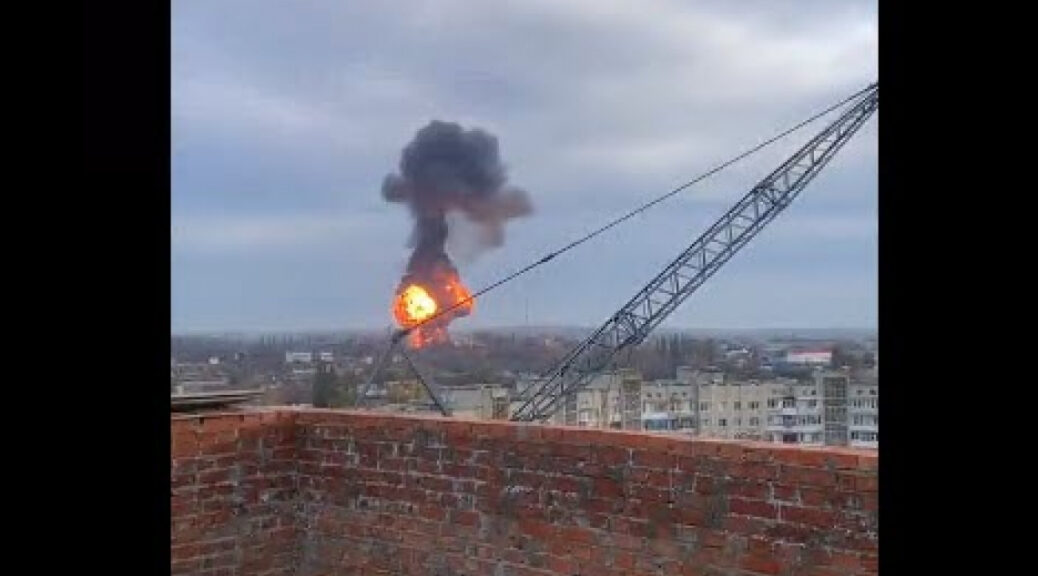 Waves of aircraft-launched missiles from the Caspian Sea and “Caliber” launched from the Black Sea are on the way and hitting inside Ukraine.

The first wave of aircraft-launched missiles from the Caspian Sea – approaching about 14:50 (Kiev time, i.e. minus an hour from Moscow time) The second wave of missiles – ± 15:30 It is also said about the launch of “Caliber” from the Black Sea.

Officials report Russia has launched missiles from the Black Sea, Caspian Sea and also Tu-95 Bombers are reportedly in the air.

Russian missile strikes against Ukraine hit Kiev, taking out the Command and Operational Headquarters of the VSU.

Kiev’s electric grid is having convulsions as well.

In Kharkov, all electricity is out after Russian missiles hit that city.

Russia picked a nifty time to strike. Ukraine/Russia is affected by a strong snow storm. About two inches of snow already and coming down harsh here. People are going to freeze and starve without power.  While they’re shivering, maybe they should ask themselves if they actually _want_ their NAZI government?  That’s what is causing all this. 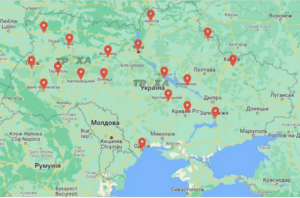 48% of Ukraine is without power and electricity. Emergency declared. Poland to provide additional electricity. Water stations down in 30% of Kyiv.

a spokesman for the Ukrainian Air Force said that the Russian army used about 100 cruise missiles in today’s massive missile attack.

According to him, this raid surpasses the missile attack on October 10, during which 84 missiles were used.

At the moment, we know about arrivals in:

In Kiev it was confirmed that the buildings of the general staff and operative command of the Armed Forces of Ukraine were hit.

The mayor of Lviv reports a difficult situation: 80% of the city is without electricity, the heat supply has been stopped, and electric transport is not running.

Ukraine now with 79% power loss. Next round of missile strikes expected tonight. Ukrainian army in full collapse as they are directed to provide assistance to electric grid.

UNCONFIRMED — UNCONFIRMED — REPORTS THAT RUSSIA USED A TYPE OF “BUNKER-BUSTER” AGAINST UKRAINE GENERAL STAFF MILITARY HEADQUARTERS IN KIEV AND THAT “ALL OF THEM ARE DEAD.”  Again this is NOT CONFIRMED, but reports are coming out saying ALL of the Ukrainian Army General Staff are now dead.

There are reports of the passage of another batch of cruise missiles over the Cherkasy region towards Kyiv.

Today was the most massive strike on the energy sector since the beginning of the conflict, – Minister of Energy of Ukraine Galushchenko

“This attack can affect not only the energy system of Ukraine, but also the energy systems of some of our neighbors. Hits occur both on generation facilities and on the power transmission system,” he added.

(Hal Turner Remark: Yesterday Zelensky declared a major victory for Ukraine that would end the war… not 24 hours later the whole country is without power, water, food and the military is in full collapse.)

NUCLEAR WAR IN EUROPE WILL NOT DIRECTLY AFFECT AMERICANS

Two “projectiles” hit inside POLAND.  Two stray rockets fell in the village of Przewodów in the Lubelskie Voivodeship near the border with Ukraine. They hit grain dryers. Two people were killed. There are police, prosecutor’s office and army on site. 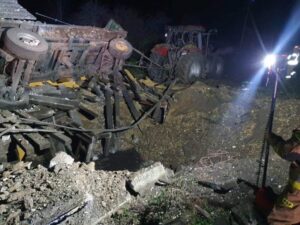 At this time, we do not know if these were Russian missiles, or Ukrainian air defense missiles that went astray.

Poland urgently convenes the Committee of the Council of Ministers for National Security and Defense Affairs.

PRESIDENT OF MOLDOVA, MAIA SANDU, DECLARES NATIONAL EMERGENCY AND TELLS CITIZENS TO PREPARE FOR EXTENDED POWER LOSS AND LOSS OF ALL SERVICES

SAYS NATO MUST DEFEND EU AGAINST RUSSIAN ATTACKS OR PLAN TO SURRENDER.
.
SAYS ZELENSKY IS A PUPPET OF THE WEST.

Reports Polish fighters have taken off from the Tomaszów Lubelski base.

A photo has been made available to me showing a missile FRAGMENT.   No word yet on whether this is a Russian Missile, or aa Ukrainian air defense missile.  No one is saying either way right now. 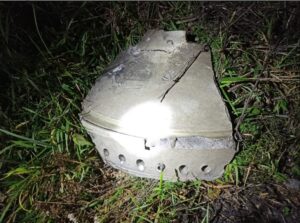 According to a missile expert with whom the Hal Turner Radio Show spoke just minutes ago, “A certain resemblance to a part of a motor section of 5V55-series missiles used with S-300 SAM systems.”

In that case, this may be the remains of a Ukrainian AD missile, or perhaps that plus the cruise missile it intercepted. However this is NOT AN ID AT THIS TIME.

GENERAL ROMAN POLKO, MEMBER OF THE POLISH SECURITY AND DEFENSE COUNCIL: “I DON’T THINK THE MISSILES WERE DELIBERATELY FIRED.”

Ukraine President Volodymyr Zelenski says the missiles in Poland “are a Russian attack upon collective security” and says “We must act.”

Missiles that landed in Poland may have been shot down by Ukrainian forces.

Word from former colleagues within the Intel Community: The Russians hit and killed a bunch of NATO officers in a logistics command center in the Ukrainian town near this border area with Poland.

Ukrainian S-300’s tried to get the incoming Kaliber missiles, but missed, which is not unusual. The S-300 missiles went into Poland.

(HT Remark: Zelensky knows this, yet he STILL went on TV, claimed it was “Russian missiles into Poland” and declared “We must act.”   It seems clear this man is actually trying to start World War 3.)

Ukraine Foreign Minister said missile that hit Poland is not Ukrainian. “Russia now promotes a conspiracy theory that it was allegedly a missile of Ukrainian air defense that fell on the Polish theory,” Dmytro Kuleba said.

Russia’s Ministry of Defense has claimed that reports of two Russian missiles landing in Poland and killing two people are a “deliberate provocation”.

The Ministry added: “No strikes were made against targets near the Ukrainian-Polish state border by Russian weapons” despite multiple recorded instances of Russian air strikes hitting Lviv, a Ukrainian city about 62 miles south of Przewodów and only 50 miles from the Ukrainian border, just hours earlier today.

The statement concluded: “The fragments published in hot pursuit by the Polish media from the scene in the village of Przewoduv have nothing to do with Russian weapons”.

Polish Senate Adviser Marcin Zaborowski: There will be a military response from NATO if the accident was intentional.

NATO ambassadors to meet on Wednesday (tomorrow) at the request of Poland on basis of alliance’s Article 4, two European diplomats say.

(Article Four is when any NATO member requests “consultations” with the other NATO members over a situation . . . . it is **NOT** Article 5 which is “Collective Self Defense.”)   According to official NATO documents, Article 4 means that “the parties shall consult together” if it is determined that their “territorial integrity, political independence or security” is threatened.”    This is the 8th time article 4 has been invoked since 1949. 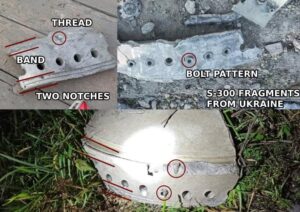 The photo at bottom is the missile fragment found at the Poland impact site.

Above left and right are other missile fragments found in Ukraine at other impact sites throughout the country.

The top left and right photos show fragments that lead to a clear conclusion that the fragment in Poland belongs to the 48D6 motor of the 5V55-series missile of the S-300 AD system- a Ukrainian one.

The missile impacts in Poland came from Ukrainian air-defense missiles; NOT Russian.