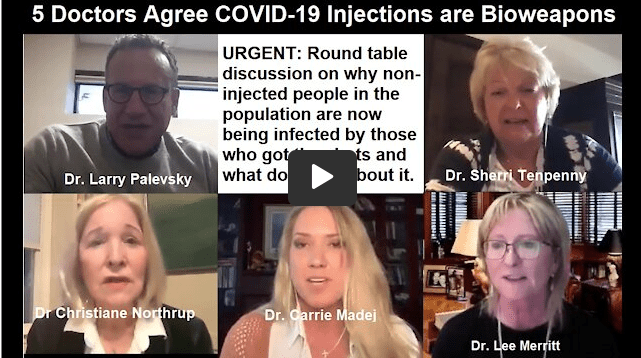 It has taken me some days to get around to listening to this very important roundtable discussion of recent revelations of symptoms reported overwhelmingly by women that is thought to come from the transmission of spike proteins from the vaccinated to the unvaccinated.

It has been a difficult one for me to get my head around so partially as a result of not being able to absorb much in the way of written reports or get information by passive listening I decided to take notes and make sense of what I was hearing.

I am sharing this rough-and-ready process with you here.

Ever since reports have surfaced in recent days that people who have chosen NOT to receive the experimental COVID-19 shots but have been exposed to those who have received them, and have suffered what appear to be infections coming from these fully “vaccinated” people, affecting mainly women who have reported menstruation difficulties, heavy bleeding, miscarriages, and reduction of breast milk, I have been watching my newsfeed to see if any of the dissenting doctors and scientists we feature regularly here at Health Impact News would address these issues.

Fortunately, a team of 5 doctors in the U.S., all of whom we have featured in the past here at Health Impact News and are highly qualified to address this topic, just held a round-table discussion a couple of days ago to address these issues.

The issues they discuss affect ALL of us in the U.S. (and around the world) right now, and it is imperative that you take 79 minutes of your time to watch this video.

Not only do these highly qualified doctors discuss why they think this is happening, they also give practical advice at the end about what we can be doing right now to protect ourselves and stop this attack on the human race by the Globalists seeking to reduce the world’s population.

Every single one of these doctors believe that these shots are NOT vaccines, but bioweapons designed to kill human beings.

Whatever else you are doing when you come across this video, it is highly unlikely that anything else you do the rest of your day will be more important than watching this video so you can be informed of the evil effects of these injections that are being censored in the corporate media and Big Tech social media.

Then share this video with as many people as you can.

If there are any take home messages from this video they are:

Dr Sherry Tenpenny conjectured that the Johnson and Johnson and the Astrazenica shots may be worse in this regard because they use a cold virus, the adenovirus in their “vaccines”which are easily transmitted via inhalation.

Some of the conditions that have been observed have included:

This has affected women overwhelmingly and seems to damage the delicate system that keeps pregnancy, fertility and  the menstrual cycle.

It is something that causes the body to make a synthetic protein against a SARS-2 spike protein. This has never been seen before and the body starts to produce it as a factory.Not something that sheds, there is now way to stop this because it has made the body into a factory. It produces a synthetic protein that theroretically can be secreted in saliva, feces, sweat, seminal fluid, blood.

Here is a basic summary of what was said be some of the presenters:

It is something that causes the body to make a synthetic protein against a SARS-2 spike protein.

This has never been seen before and the body starts to produce it as a factory.Not something that sheds, there is now way to stop this because it has made the body into a factory. I It produces a synthetic protein that theroretically can be secreted in saliva, feces, sweat, seminal fluid, blood.

One example of what she has to say is here:

Nanolipid particles  (also variably described as nanobots or hydropgel) are one of ingredients of the Pfizer, Moderna mRNA “vaccines”  This technology uses technology – little computer bits – nanobots or hydrogel that are designed to stop the body from intercepting and destroying the foreign material that is injected into the body. It is basically designed to trick the body.

We know what is going into the body but we don not know and they have never told us what can happen once the drug is deposited  We are sure the hydrogel can last for many years.

These nanobots or hydrogel can be used as biosensors in the body. Because they are synthetic it can be used to collect data from the body and can work through wifi, such as 5G and transmit energy or impulses. She has been measuring electromagnetic pollution since January and says EMF energies are far in excess what they were  even a year ago.

She gave some examples of how EMF pollution affects people with two examples based on older research: Men who have had a laptop on their laps in excess of 15 minuted have their sperm counts halved and in people holding a cellphone up their ears the blood cell structure changes and becomes elongated and sticky.

Here is an earlier video made by Carrie Madej. She has not changed her views since:

Dr. Lee Merritt is somebody I have encountered for the first time. She described some other more generalised symptom that included a hairdresser who kept getting sick with flu-like, COVID-like symptoms after being exposed to colleagues who had been vaccinated.

She said she had looked at VAERS data and searched for cases that included bleeding and picked up in excess of 300 cases .

She also gave the example of thalidomide – not everybody was born with missing limbs but there was a gradient of effects from the less serious to the most serious. She thinks this is the case here.

Here is Dr. Merritt being interviewed.

Pediatrician, Dr.Larry Paevski was the most strongly-worded warning

The essence of what he was saying was this is not a vaccine, repeated several times.

There is nothing in this shot that is designed to protect against a viral infection. It cannot stop the transmission of SARS COVID-2 virus

People back in 2020 were getting conditions such as  hypoxia, blood disorders, lung disease, strokes, hypertension, neurological sypmotoms.  He says this was not a viral disease but the clinical manifestation of poisoning of the blood.

The spike protein of this “virus” was responsible for all of these manifestations and the spike protein that produced this was not a natural virus – it was a man-made bioweapon attached to a virus .

This spike protein could attach to receptors all over the body.

He asked: why are we OK with injecting something into the body that makes spike proteins, the very thing that was creating the illness in the first place?

We have no idea of what is in these things.

We THINK it is spike protein.

We have no scientific evidence to tell us if this mRNA turns off or remains turned on and no evidence whether the spike protein produced by the body being exhaled, no idea.

They do not need to inject the entire population because those people are the carriers of a genocidal bioweapon: they actually the lepers and are making people who have never been injected get COVID symptoms.

It is weapon of mass destruction and can pass material into all parts of the body – brain, heart, kidneys, the female reproductive system etc,

Dr. Tenpenny referred people on to this site for resources and information people could use.

The action of all the main vaccines is to make a spike protein and create an antibody to that spike protein. It can bust through the blood-brain barrier, it can manipulate genes, modify proteins in the brain.

The J & J, in her mind is the worst of all the shots because it contains an adenovirus shell that has genetic material inside of it. The adenovirus is a common cold virus.

Literally 60 billion particles of adenovirus are injected into your arm.

WHAT CAN PEOPLE DO?

The consensus was the best thing we could do was to try to maintain our immune system as best we can.

Immunity is an inside-out affair. Basically we are swimming in stuff –  viruses and bacteria. The problem is that what we are swimming in now is not natural. It is a  manmade bioweapon but that does not mean we are just sitting duck.

Some of the suggestions were:

The other aspect of care was the vibrational aspect, staying out of fear – getting together on a very regular basis, singing , dancing, prayer, meditation – all the very things that are being made illegal by governments.