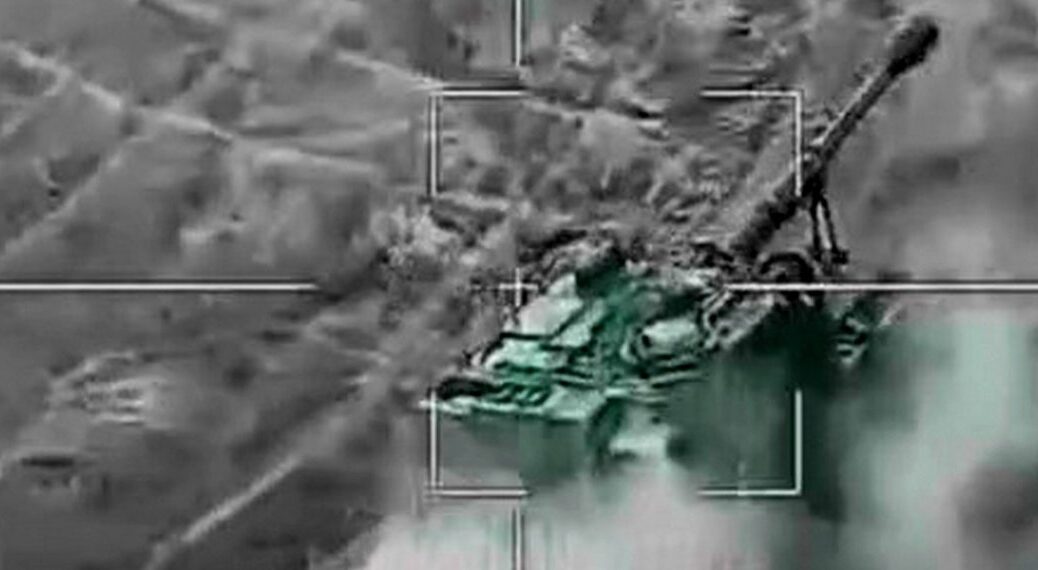 5,000 Polish soldiers are transported to Zaporizhzhya and Ugledar after the unprecedented massacre of Ukrainians – Frame by frame the harvest with Lancet and KUB

The big match begins in Zaporizhia and Ugledar

Over 5,000 Polish soldiers are transferred to the Zaporizhzhya and Ugledar fronts (caused by the loss of Pavlovka), after repeated Ukrainian defeats and the great crushing suffered by Kyiv. As WarNews247 revealed yesterday, the Russians no longer consider them mercenaries but regular units of the Polish Army.

Both regions will play a key and decisive role in the subsequent war developments in Ukraine. The Poles will try to organize offensive operations in Zaporizhzhya as the Ukrainian forces have suffered heavy losses.

In the videos presented by WarNews247, the Russians first mowed them down with Lancet-3 and KUB kamikaze drones, followed by raids by attack helicopters and Su-25 close support aircraft while we gathered the artillery with 2S7M Malka and Smerch MLRS systems.

The great defeat of the Ukrainians according to the newest information of WarNews247 took place on November 7. Only 20 tanks and half of the armored ones survived the Ukrainian attack wave.

Polish soldiers are transported to Ugledar and Zaporizhzhya

By the evening of November 9, Russian troops had broken through the defenses of the Armed Forces of Ukraine in the forts between Pavlovka and Ugledar. At the same time, in the Nikolsky and Pavlovsky areas, as well as behind the waste heaps of Yuzhnodonbasskaya mine No. 1 north of Ugledar, Russian Armed Forces artillery destroyed Ukrainian mortar positions covering Ugledar.

Later, the northern part of the Ugledar-Konstantinovka highway came under the control of the Russian Armed Forces.

After control of Pavlovka, Russian electronic warfare systems killed communications in the Ugledar area. Artillery was thrown into battle along with tanks. By this evening, the bastions near Ugledar, as well as the ATGM positions of the Armed Forces of Ukraine in the area of ​​the Kashlagach river, were destroyed by artillery.

The 72nd brigade of the Armed Forces of Ukraine, defending Vuhledar, suffered heavy losses and called for help, however, while forming the help, reserves from the 108th territorial defense brigade were attacked by Russian artillery.

Now instead of Ground Defense forces, it is planned to transfer units of the 15th separate artillery reconnaissance brigade to Vuhledar, which is made up of former and current soldiers of the Polish army.

The Poles will be transferred to the Prechistovka and Zolotaya Niva area west of Vugledar, together with the remnants of the defeated 68th Jaeger Brigade of the Armed Forces of the Russian Federation.

A total of up to 5,000 Poles have gathered in Zaporizhzhya.

According to the Russian report, in the last 48 hours:

-An ammunition depot of the 28th mechanized brigade of the Armed Forces of Ukraine was destroyed near the city of Nikolaev.

– Fighters of the Russian Aerospace Forces in the Mirovka region, in Zaporozhye, shot down a Mi-8 helicopter of the Ukrainian Air Force.

Gatherings of mercenaries were beaten

-In addition, operational-tactical and military aviation, missile forces and artillery hit two command posts of the Armed Forces of Ukraine and foreign mercenaries in the Nikolaev regions and the village of Sukhoi Stavok, Kherson region, as well as 46 artillery units in firing positions , manpower and military equipment in 153 areas.

-In the districts of the village of Krasny Liman of the Donetsk People’s Republic, Novogrigorovka, Kherson region and Novopoltavka and in Nikolaev, three anti-artillery AN/TPQ-50 radar stations of American manufacture were destroyed.

– Fighters of the Russian Aerospace Forces in the Malomikhaylovskoe area, in Nikolaev, shot down a Su-25 aircraft of the Ukrainian Air Force. In the Rizdvyanka area, Zaporizhia, a Ukrainian Mi-8 helicopter was shot down.