A large earthquake has hit Melbourne this morning.

Is it just yet another large coinkydink? As you can see the earthquake struck after 9.00 am.

Thankfully, the additional six tremors were significantly smaller with the second most powerful quake — a magnitude-4.1 event — taking place at 9.33am, about 17 minutes after the big one.

My attention was drawn by this.

The article below was datestamped 7.15 a.m and when I looked it that was how it read. 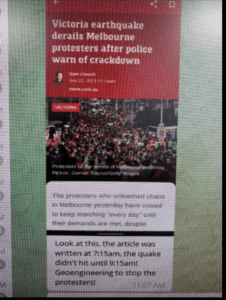 In keeping with the dishonest media they changed the headline to read as follows.

A large group of protesters surrounded the Shrine of Remembrance in Melbourne, as tensions with police continue to simmer.

Is it any wonder we start to think that perhaps the earthquake MIGHT be manmade.

Are we to believe that it is all coincidental and the timestamps on articles are there just for show?

A person walks past damage to the exterior of a restaurant following an earthquake in the Windsor suburb of Melbourne, Australia, September 22, 2021. REUTERS /AAP Image/James Ross
A 6.0 magnitude earthquake struck Australia’s southern coast, according to local authorities, inflicting significant damage seen in videos circulating online, including in Melbourne, the country’s second-largest city.

The quake hit around 9:15am local time on Wednesday and was recorded at a magnitude of 6 by Australia’s Geoscience agency, which noted there is currently no tsunami threat to the region.

Photos and videos have emerged on social media purporting to show the aftermath of the earthquake, which appeared to damage some buildings in Melbourne, whose streets were seen strewn with rubble.

A local news broadcast was interrupted by the quake, with shaking visible in the footage as staff cleared out of the studio and one of the presenters is heard noting “that was a big one.” Other videos showing residents caught off guard by the jolt also made the rounds.

While the extent of the damage from Wednesday’s quake remains unclear, it was reportedly among the largest to hit on land in Australia in decades, rivaling a 2016 seism in the Petermann mountain range, which fortunately occurred in a sparsely populated region, avoiding catastrophic damage that could have resulted had it struck elsewhere. The largest quake ever recorded in the country came in 1988 – a 6.6 magnitude jolt that also hit a largely unpopulated area, though it did inflict damage to a major gas line.

Meanwhile, here is some mainstream coverage showing the damage.

CFMEU accuses its own MEMBERS of being ‘far-right Nazis’

Yesterday’s protest outside CFMEU headquarters in Victoria marked a watershed moment for the union and the Labor Party.

Thousands of construction workers rallied outside the CFMEU base demanding to see union boss John Setka after failing to protect members from Labor’s mandatory vaccination order.

In an extraordinary move, the CFMEU released an official statement blaming the protest on a mob of far-right Nazis instead of acknowledging the anger of thousands of CFMEU construction workers.

The CFMEU turned the comment section off to prevent anyone questioning the accusations laid out in their media release, which ‘condemns far-right extremist violence.

In reality, video footage from the day shows the vast majority were outraged union members.

“These are not actions of people who care about their workmates and the construction industry,” said the press release, making no mention of union members demanding Setka save their jobs.

Starting from next week, any construction worker that has not begun the vaccination process will lose their job.

Furious, union members demanded to know what they paid their union fees for as Labor’s health orders threaten their livelihoods.

Whether or not he supports it personally, the CFMEU, under Setka’s direction, has done nothing to stop Labor leader Daniel Andrews’ health orders from putting thousands of union members’ jobs at risk.

This verbal scuffle over mandatory vaccination resulted in the crowd chanting, “Dan Andrews’ bitch!” at Setka, drowning out his attempts to calm them.

The confrontation started badly, with Setka’s off-sider flipping an ‘up yours’ V-sign as he stepped out of the building to address the crowd.

Tensions escalated as Setka asked the crowd if they wanted him to shut the whole construction industry down, to which they replied, “Shut it down! Shut it down!”.

They then called Setka a ‘sell-out’ and ‘scabber’ for allowing other constructions workers to cross the picket line and take their jobs instead of standing up for the rights of all workers.

Getting nowhere, Setka turned his back on the crowd and retreated into the building. This sparked the furious workers to throw water bottles and attempt to follow him into the CFMEU headquarters. Union officials were shown on camera viciously beating members of the crowd with the megaphone before the doors closed.

On the weekend, police appeared in full riot gear to intimidate and arrest Freedom Day protesters while Premier Daniel Andrews had public transport across Melbourne shut down.

Shocking scenes emerged of Victoria Police attacking journalists with pepper spray and shoving an elderly woman to the ground where a mask-less cop sprayed her in the face at close range.

This time, police hung back even as nearly a thousand people congregated outside the CFMEU headquarters in clear violation of the standing health orders.

Police conduct caused people to ask why they were observing a double standard for CFMEU union members – an action that further undermines claims from political commentators later in the evening that these were ‘far-right Nazi thugs’. The police almost certainly would have engaged in the same heavy-handed policing seen against Freedom Day protesters if they were.

Despite the protest swelling as workers from nearby construction sites took their lunch breaks, arriving in their high-vis vests, boots, and hard hats – some commentators continued to cling to the idea that this was some kind of Nazi conspiracy.

These commentators did not explain how a protest of this magnitude was organised while a dedicated social media task force was supposed to be monitoring fringe ‘far-right’ accounts.

The bizarre accusations that CFMEU workers are ‘far-right Nazis’ came off as a desperate attempt by the embarrassed CFMEU to invalidate the grievances of their members.

They have vowed to picket the CFMEU headquarters every day until Setka does something about the health orders.

Labor figures have stepped forward to defend the CFMEU’s honour.

“There is a network of hard-right, man-baby Nazis, people who just want to cause trouble and complain about the vaccination,” said Shorten.

The accusation appears to be little more than a slur without any grounding in ideological reality.

“They deserve to get the full force of everything that’s coming their way,” Shorten continued.

What’s ‘coming their way’ for union members who refuse vaccination is the queue at Centrelink.

This is how things are being framed by the “progressive” media

Scenes of protesters clad in hi-vis jackets and shouting anti-vaccination slogans have dominated the news this week. As the ABC reported:

Some of those gathered held a banner reading ‘freedom’, while others sang the national anthem and chanted ‘f*** the jab’.

Some attacked union offices, drawing criticism from officials such as ACTU chief Sally McManus, who described the protests as being orchestrated “by violent right-wing extremists and anti-vaccination activists.”

These images may shock some but for researchers like me — who research far-right nationalist and conspiracy movements, and explore the online spaces where these people organise — these scenes came as no real surprise

Meanwhile, agents provocateurs are being sent in by the police to incite violence.

Meanwhile, another outrage on the streets of Melbourne.

While we are talking about construction workers, across the Ditch, in New Zealand there is this.

Is it a provocation?

I am sure that construction workers in New Zealand will be watching their brethren closely.

An Auckland construction firm says people who can’t provide proof they have been vaccinated against Covid-19 will not be allowed access to its sites.

But unions and industry safety groups are urging companies to be careful when it comes to policies that mandate vaccination.

In an email sent to subcontractors on Tuesday, Teak Construction site manager Richard Harrison said that in alert levels 2 and 3 people accessing its construction sites, including its head office, would only be allowed to do so if they had at least one dose of the Covid-19 vaccine.