There is something going on in New Zealand and I believe it has a lot to do with the rapid breakdown of people’s immune systems as a result of the mass vaccination campaign. I have written about it in my article.

The number of cases is going up massively as are the number of hospitalised. All this I believe to be thanks to Jacinda Adern’s insistence on jabbing everyone in the country, You can see that clearly here 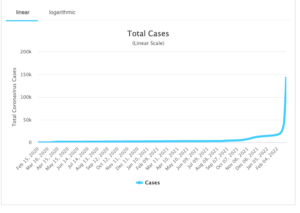 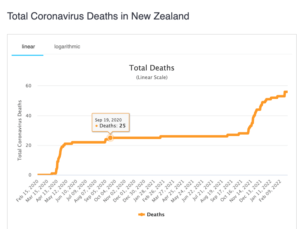 This tweet is saying that proportionately New Zealand has more cases than the United States, something that, if true is saying quite something. 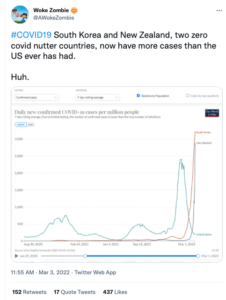 Attention has been pointed towards the huge number of Victoria University students (about 30% of the total student population) have tested positive for covid-19 and are isolating in their rooms. 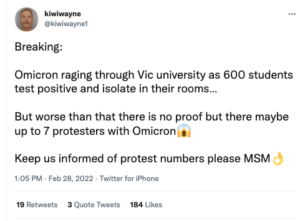 Is this a case of numbers been inflated through testing procedures?

I am dubious because of the sheer numbers involved.

The tweet says that a number of people at the Freedom Village at parliament have also tested (or come down with symptoms).

In this regard I can report that in the last day or so THREE people who have been at parliament have come down with symptoms that they themselves say is probably covid-19 so that the media reports may not be entirely false.

They are unvaccinated and know how to look after themselves so will recover quickly. Not so the multitude of vaxxed and double-vaxxed who are coming down with what the testing (with all its inaccuracies) identifies as Omicron.

These are ominous signs that the scenario described in my article and by the likes of Geert vanden Bossche is coming to pass.

I have posted this information on Telegram but it elicited the least amount of interest of anything there, something that I take as a sign that people are unaware of what is coming down the line.

Perhaps they have enough with their lives being torn apart by Jacinda’s vaccine mandate and having people in their lives damaged by the vaccines that their minds cannot encompass more bad news?

COVID-19: Omicron outbreak taking its toll on university students in halls of residence

University students living in halls of residence say almost everyone they know has COVID-19.

New Zealand has passed 120,000 cases currently active in the community, with 22,152 community cases recorded on Wednesday.

And with young people making up the majority of recent cases, university students who have so far managed to avoid the virus say it is only a matter of time before it gets them too.

For first-year university student Charlotte Werner, that was not what she envisioned orientation week would be like.

Instead of parties, drinks and meeting new friends, pretty much everyone she knows on campus is holed up in their room.

“We still drank and made the best of it, and had fun and socialised but obviously with a bit of apprehension about going down into town and going down into the flats and seeing other people we knew just because you’d see somebody and the next day, they’d tested positive,” Werner said.

She is staying at the University of Otago’s halls of residence in Dunedin, renowned for their wild parties. She has just finished three days of self-imposed isolation after her roommate thought she might have COVID-19.

“I literally just got out and then today one of my good friends tested positive. So, it does definitely feel like it’s everywhere,” she said.  “Every day you just hear new cases of people you know just popping up all around the place.”

The university and student association had been supporting those who were stuck in their small rooms day in, day out, she said.

“They’ve got on-site support 24 hours a day in case you need anything you can just ring the administration and they’ll bring anything down that you need. I haven’t felt like I’ve been missing home or anything while I was in isolation because we’ve got a great support system set up here.”

It was the first time Werner lived away from home and the situation had her parents worried.

“My sister just got COVID two days ago, so when I told them that there were COVID cases in my hall and that one of my friends has it they were very scared that it was going to take out both of their wee-daughters, but you know it’s survival of the fittest and if it gets me, it gets me.”

Maisson Murray has just arrived in Wellington from rural Waiuku in south Auckland to begin her studies at Victoria University of Wellington.

Until she got to the capital, COVID-19 was something she only heard about on the news.

“A lot of people on my floor have it and I’m actually feeling quite sick as well but I’ve taken three RAT tests and they’re all coming back negative, which I’m really confused about, because I definitely feel like I have it, but maybe not,” she said.

She was one of the numerous students self-isolating despite testing negative, just to be on the safe side.

“One of my friends has it and she’s been saying that the isolation food in a hall is really bad, I feel bad for her because she’s in quite a big hall and it seems quite lonely and she can’t go outside either,” Murray said.

About 60 percent of all the active cases in Aotearoa are aged under 30.

Director-General of Health Ashley Bloomfield has called the start of the university year “a nationwide super-spreader event”.

“It’s very clear that universities have done very good planning for this and have got in place the support that students need to be able to safely isolate and to protect students that might not yet be infected from getting infected,” Dr Bloomfield said

At the University of Auckland, o-week has been equally disappointing.

For Georgia Land, coming to COVID-19 central from small-town Coromandel was a bit of a shock to the system.

“There’s a floor above me and absolutely everyone has a positive case. It was pretty eye-opening really because I did not take COVID as seriously as one would in Auckland because it wasn’t a massive threat to me,” Land said.

“So to come here and have to remember to always have a mask on you and carry hand sanitiser and scan in and have your vaccine pass ready to go, it’s been a massive learning curve for me.

“You would hear on the TV and the radio about how long Auckland lockdowns are going or what their case numbers are but you never realise what it’s actually like to live amongst that.”

Each university hall had different regulations, and students at hers had been confined for a week, she said.

“I have been put into isolation where I am pretty much restricted to my floor only, unless it is meal times or our allocated laundry times. But today is freedom day and so we are going to go out and buy some food.”

Students received daily communication from the university about the outbreak, with emails also sent to worried parents to keep them in the loop.

“You get your breakfast, lunch and dinner all delivered to you in your room. You have a designated bathroom to go to or what I would have done if I do test positive, you can go home and isolate with your family,” Land said. “You would not want to be stuck in your room for 10 days, there’s no space to move around, you’re lucky if you get enough room to do a little bit of yoga in the morning. But other than that, you’re confined to a small space, it wouldn’t be the best thing.”

At the University of Otago, the Students’ Association has delivered more than 4000 food parcels to those hit by the virus over the past week or so.

Fully funded by the university, they included items like pasta, noodles, rice, toothbrushes and some fresh fruit and vegetables.

Association president Melissa Lama was particularly concerned about first-years who might be feeling lonely and isolated, but she was confident they were doing everything they can.

“I just hope that they know that they’re not alone here in Dunedin and as scary and anxious it is I know that if we work together and get through this real soon, hopefully, we’ll be back on campus so we can all see each other and be a community again.”

It is unclear precisely how many students in university halls currently have the coronavirus.

As of Wednesday, Auckland University of Technology said 209 of its 712 resident students were in isolation with COVID-19 or because they were contacts.

The University of Auckland had approximately 450 hall residents with COVID-19. The universities of Otago, Canterbury, and Massey did not provide RNZ with details of case numbers in their halls.

In a statement, Victoria University of Wellington said its case numbers were currently fluctuating between about 600 and 850 among the 2500 students in its university residence.

“These numbers represent approximately 30 percent of our hall residents and 3 percent of our overall student roll. Additional staff have joined our accommodation team to ensure we can provide meals and welfare checks to students who are isolating in their rooms in our halls of residence.

“We are also focused on providing care packages to students who are isolating in private accommodation.”

As well as being confined to their rooms in their free time, most students are having to attend virtual lectures, too, although some universities are able to provide a mixture of online and in-person learning.