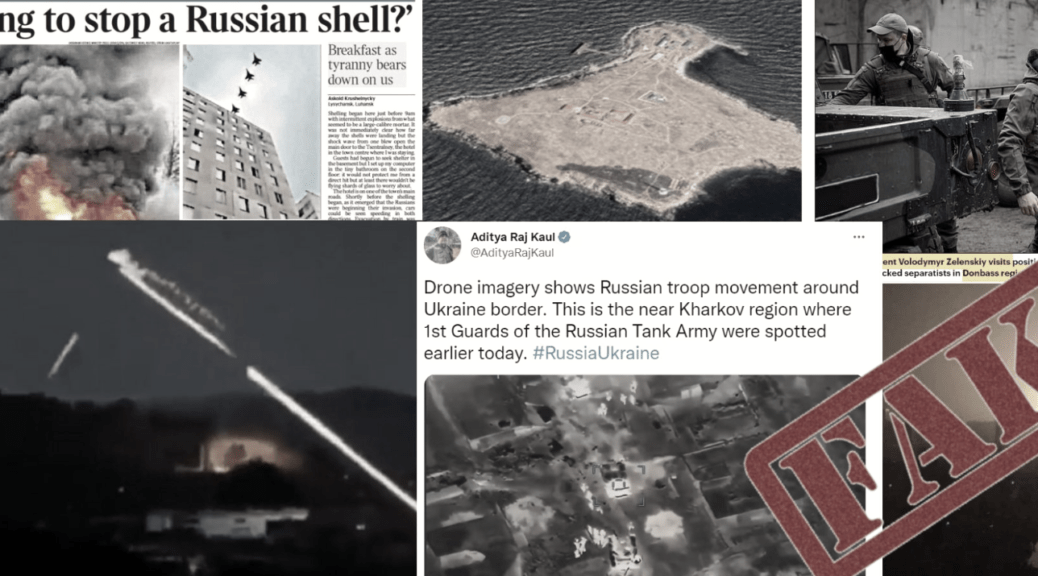 In any war the first casualty is truth.

I am sure there is propaganda aplenty on both sides.

But, here we can see the fakery from western media.

We’re only three days into Russia’s military operation in Ukraine, and yet the propaganda cogs are whirring fast as lightning, churning out “news”, opinion and content grist for the media mill.

In just the last 48 hours dozens of stories, images, narratives and videos have circulated as being taken from the fighting in Ukraine, a huge percentage of which are fake.

Now, some of it could be attributed to misunderstandings, mistaken identity, misattribution…but many and most are likely deliberate deceptions designed to provoke a response. Let’s dive right in.

Early Friday morning it was reported that a single Ukrainian plane, a MiG-29, was patrolling the skies above Kiev. The English speaking press called the unnamed pilot “The Ghost of Kiev”, and claimed he had downed 6 Russian jets in air-to-air combat in less than 2 days, making him an official Fighter Ace, and probably one of the fastest to ever earn that title.

The trouble is there is almost no evidence this happened at all. To quote Newsweek:

There is zero evidence the “Ghost of Kyiv” exists”.

Neither side can confirm Russia has lost six planes in total, let alone to one man inside a single day. And a video alleged to be “the Ghost” in combat – shared by the Ukrainian Armed Forces – is confirmed to actually be footage taken from a video game.

Nevertheless, he already has his own Wikipedia page. A testament to how fast a lie can move while the truth is putting its boots on.

A lot of people have been sharing a short video of Russian planes allegedly flying low over the city of Kiev. The Times used it a still from it in their story “Will sanctions stop a Russian shell?”: 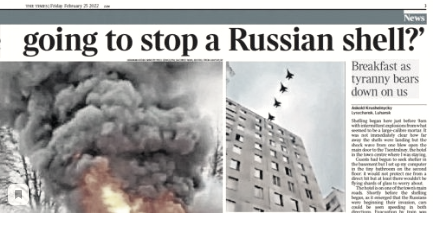 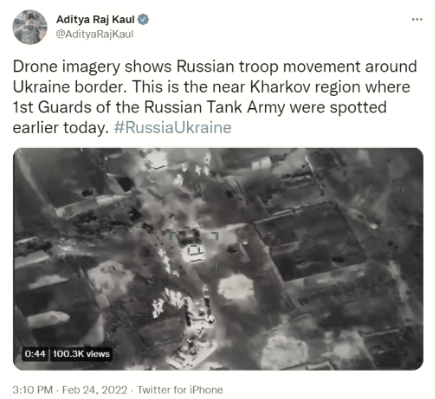 The problem with that is it’s not Kiev, it’s Moscow. And it’s not today, it’s two years ago. It’s footage of what is likely a rehearsal for the 2020 Victory Day Parade flyover.

Possibly no politician in history has had a PR makeover quite as fast as Vlodomyr Zelenskiy. Last week he was just some guy, this week he’s a war hero, there’s talk of building statues of the man. A (not at all staged) “leaked” phone call had him turning down the US offer of an airlift to safety.

Twitter is dotted with people sharing photos of him in combat fatigues, comparing him favourably to Trump and Trudeau and asking “what other leaders would fight alongside their troops?”

But the problem with that is the photos are all almost a year old, taken when he visited the troops last April: 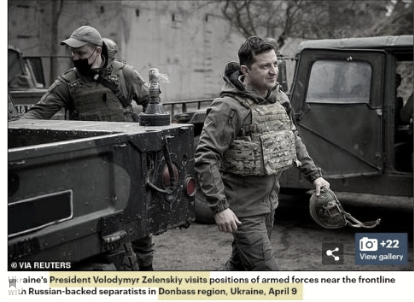 Early on in the confrontation, this video started doing the rounds on social media:

The video went viral, receiving 100,000s of views. Hundreds of accounts shared it, even major news networks used it, all claiming it shows a power station in Luhansk exploding after being hit with Russian missiles.

It does not, it’s a chemical plant exploding in Tianjin, China in 2015. 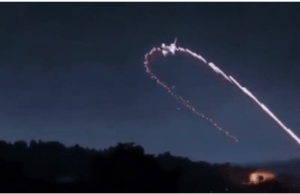 I have added the video – ed.

This was the first major propaganda narrative following Russia’s advance onto Ukrainian territory. Allegedly leaked audio showed Ukrainian border guards on tiny Snake Island in the black sea communicating with a Russian warship. Upon being told to surrender, the guards say “Russian warship go fuck yourself”.

The Western press reported that all 13 of the men were killed, and the Ukrainian government released a statement saying they would all be awarded posthumous honors.

However, while the supposedly fallen heroes were being canonised all over the western world, Russia was reporting that they had not been killed at all, but taken alive and unharmed back to the mainland.

A story both the press and the Ukrainian government have since reluctantly admitted is likely true.

Another video doing the rounds, and again shared by official Ukrainian accounts, was drone footage supposedly showing the destruction of a column of Russian vehicles. 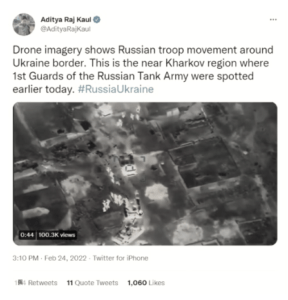 It’s actually footage of a Turkish drone strike in Syria from 2020.

Meanwhile, other accounts were sharing footage of combat from Libya or Israeli bombardments of Gaza under the hashtag #StandWithUkraine. Middle East Eye has compiled a list.

It’s somewhat beautiful irony that so many of the clips prompting outrage in Western liberals actually come from wars their governments started.

There we have it, seven stories about the war in Ukraine that are demonstrably fake, and that’s just the tip of the iceberg.

There’s tons of other fakes out there, not to mention fakes of fakes designed to discredit doubters or just spread chaos.

Ultimately, it’s all a timely reminder that propaganda is at its most potent at times where the news is moving fast and people are feeling emotional.

That is WHY the media whips up fear, anxiety and hatred, because people in that emotional state are less likely to think critically.

It should go without saying that this is equally true for both sides. We shouldn’t blindly accept claims from the Russian side, simply because we know NATO lies. Both sides propagandize, and one-eyed scepticism is only a different kind of bias.

In short, if you see something designed to provoke an emotional reaction, don’t let it. Never get swept along in the narrative, always hold yourself back, keep calm and ask rational questions.

Withhold belief, demand facts. It’s the only way to keep your mind free.

Or, to quote HL Mencken:

Never believe anything you hear, and only half of what you see.”

Authored by Eric Garris via AntiWar.com,

Noted YouTube “scambuster” Kitboga, who has 2.2 million subscribers, has posted the video below showing many examples of viral TikTok videos purporting to be scenes of war in Ukraine.

There are actual videos of the war, but everyone needs to be skeptical and ask for sources.

Here are some other articles about fake or misleading Ukraine war videos:

A number of weekend media articles began exposing some viral videos which were fake, many racking up tens of thousands of shares on Facebook.

According to one such report: “In fact, Gizmodo has found at least ten viral photos and videos currently being spread on social media that are completely fake.”

“In some cases, the videos and photos are years old. In others, the images are clearly not from Ukraine. There are even two examples of videos on Twitter today that are actually from war-themed video games…”

“Nobody knows how long this invasion will last. But however long that may be, you can bet on one thing: There will be plenty more fake photos and videos passed around online before this conflict is over,” Gizmodo concludes in its own review of some of the fake videos.