I was woken up by a long quake that was felt throughout New Zealand as far south as Dunedin. No sleep after that!

Based on the preliminary earthquake parameters, hazardous tsunami waves are possible for coasts located within 300 km (180 miles) of the earthquake epicenter, PTWC said.

A tsunami is a series of waves. The time between wave crests can vary from 5 minutes to an hour.

“We are assessing whether the earthquake has created a tsunami that could affect New Zealand. We will provide an update as soon as the initial assessment has been completed,” New Zealand’s National Emergency Management Agency said.

“Anyone near the coast who felt a LONG or STRONG quake should MOVE IMMEDIATELY to the nearest high ground, or as far inland as you can.”

The USGS issued a Green alert for shaking-related fatalities and economic losses. There is a low likelihood of casualties and damage.

Overall, the population in this region resides in structures that are highly resistant to earthquake shaking, though some vulnerable structures exist. The predominant vulnerable building types are reinforced masonry and unreinforced brick with timber floor construction.

Recent earthquakes in this area have caused secondary hazards such as landslides that might have contributed to losses.

Update (1520): Another massive aftershock has been reported by New Zealand’s National Emergency Management Agency. They say the magnitude 8.0 aftershock hit near the Kermadec Islands.

“We are assessing whether the M8.0 KERMADEC ISLANDS REGION earthquake poses any tsunami threat to New Zealand. If a tsunami has been generated, it is not likely to arrive in New Zealand for at least Please Select hours,” National Emergency Management Agency tweeted.

The United States Geological Survey (USGS) reports the quake at a magnitude 8.1. 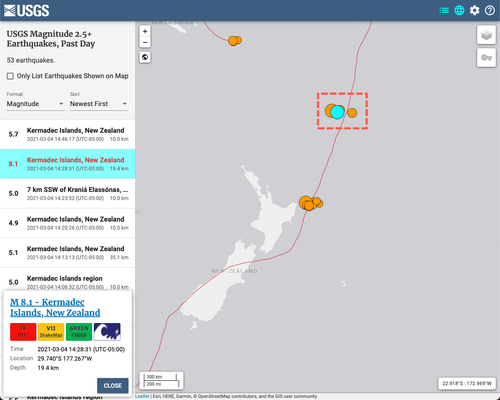 “Tsunami Watch” has been issued for Hawaii following the massive aftershock in the western Pacific.

The tsunami threat forecast has been updated. 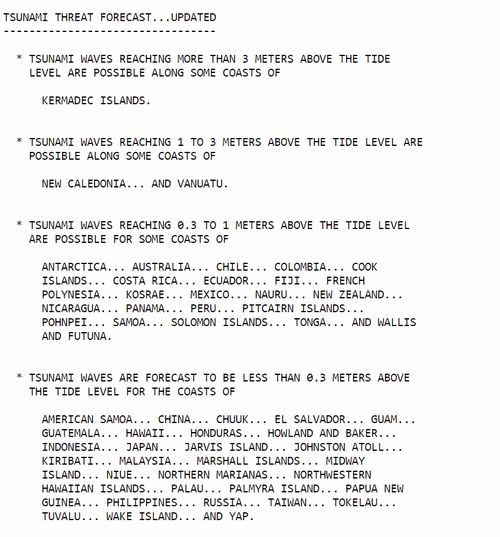 Three very strong earthquakes have been reported around New Zealand on Thursday. 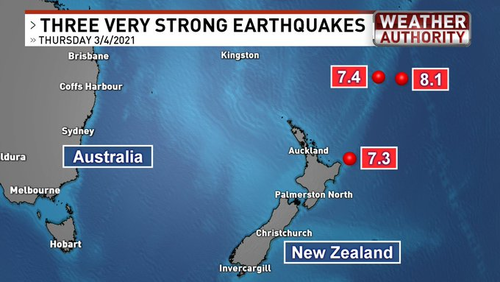 Update (1305ET): What the hell is happening around New Zealand?

A massive aftershock was just reported by the European-Mediterranean Seismological Centre of a magnitude 7.2 strike near the Kermadec Islands, an island arc in the South Pacific Ocean 800 to 1,000 km northeast of New Zealand’s North Island.

The United States Geological Survey (USGS) reports the quake at a magnitude 7.5.

Update (1030 ET): Following a massive earthquake off the coast of New Zealand earlier this morning, with warnings of an imminent tsunami – it appears the Pacific Tsunami Warning Center has called off the warning.

USGS warns “hazardous tsunami waves” are possible 300km (186 miles) from the epicenter. New warnings suggest tsunami waves could be at least 1 meter above tide. Here’s the approximate area where the quake struck. 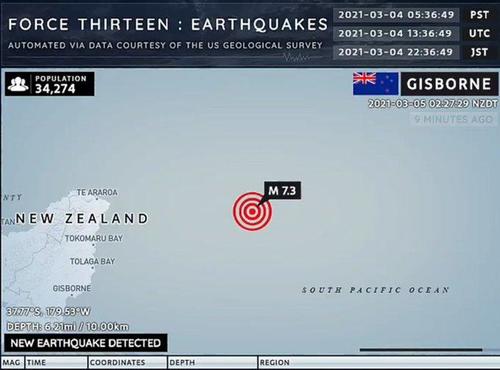 “We are assessing whether the M7.3 EAST OF THE NORTH ISLAND NEW ZEALAND earthquake at 2021-03-05 2:27 a.m. has created a tsunami that could affect New Zealand. We will provide an update as soon as the initial assessment has been completed,” New Zeland’s National Emergency Management Agency tweeted.

“Anyone near the coast who felt a LONG or STRONG quake should MOVE IMMEDIATELY to the nearest high ground, or as far inland as you can.”

“This evacuation advice overrides the current COVID-19 Alert Level requirements. Do not stay at home if you are near the coast and felt the earthquake LONG or STRONG. Evacuate immediately to the nearest high ground, out of all tsunami evacuation zones or as far inland as possible. Stay 2 metres away from others if you can and it is safe to do so.” 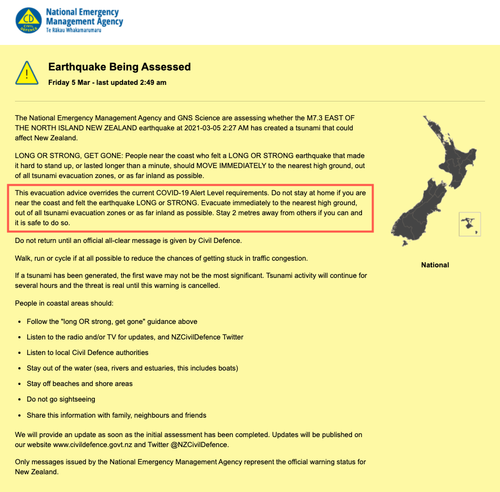 National Emergency Management Agency issues tsunami warnings east of North Island New Zealand. It also says, “there is a LAND and MARINE TSUNAMI THREAT. An EMA will be issued to areas under land and marine tsunami threat.”

“The first waves may have reached NZ in the areas around East Cape at approximately 3:34 am. Tsunami activity will continue for several hours and the threat must be regarded as real until this warning is canceled,” National Emergency Management Agency tweeted.

Risklayer, a risk-mitigating firm, outlines the areas where “shaking” from the quake could produce damage. 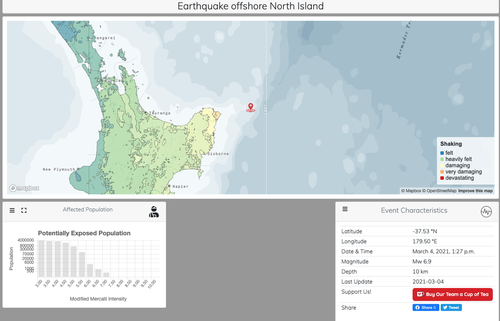 “By far the largest earthquake I’ve felt in Auckland, in the 22 years I’ve lived here,” one user said.

Alleged video emerges on Twitter of potential building damage sustained during the quake.

Another person tweeted: Bloody decent earthquake woke us all up, has been aftershocks and such, hopefully, everyone near the coasts are being careful with the tsunami warning…”

*This story is developing…

What you need to know: