Due to lack of energy to keep it up every day I have discontinued graphing this.

These are OFFICIAL figures. There have to be a lot of hidden cases because A LOT of people who WANT to be tested are not.

New
Zealand has recorded just 29 new cases of Covid-19 in the past 24
hours, but the prime minister says a decision on changing the alert
level will only be made two days before the lockdown ends.

It
is the fourth day in a row there has been a day-on-day drop.

Director-General
of Health Dr Ashley Bloomfield said there are 23 new confirmed cases
of Covid-19 and six probable cases in New Zealand today. That brings
the total number of cases to 1239.

Despite
the drop in new cases, Prime Minister Jacinda Ardern made it clear
the lockdown will not end before the four-week period is up.

She
said any decision on changing the country’s alert level will be made
on 20 April, two days before the four-week lockdown ends.

She
said this meant businesses will have two days to prepare for any move
into alert level 3.

But
Ardern said the country’s response to the lockdown over the past two
weeks had been “huge”.

“In
the face of the greatest threat to human health that we have faced in
over a century, Kiwis have quietly and collectively implemented a
nationwide wall of defence.

“You
are breaking the chain of transmission and you did it for each
other,” she said.

“As
we head into Easter, I say thank you to you and your bubble,”
Ardern said. 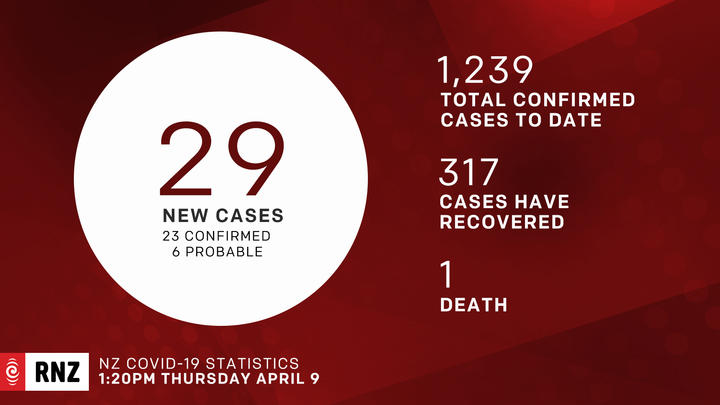