This is a bit of entertainment from earthquake predictor, Ken Ring, until proven otherwise

via Facebook
Not over yet
So far, with flooding almost everywhere a feature of New Zealand weather, particularly Gisborne and the East Coast, my suggestions made well before Christmas have come to fruition. Those who managed to get their hay in before 25 December 2022 will be grinning. Is another cyclone going to affect us? Once again, the loose talk of the news media is complete misinformation. First of all, New Zealand is only ever affected by EX-cyclones which reach as far as the Pacific Islands and then begin to decay.
Such has been the case last March and over this month. New Zealand is just too far south to ever get any more than remnants of heavy rain systems. Therefore, cyclones NEVER affect this country. Of course, the news media like to get sensational and would love it if a cyclone really could inflict damage here, just as they wish a tsunami would one day strike us. Sadly, however, this is not the case, and the NZ media have to put up with the fact that most weather stories will be old hat by the time they get themselves into gear.
As for the real weather, I do not change my predictions once they are made. They are set in concrete, as it were, and I have said already that fine and continuous summery weather is NOT going to occur until the perigee is over, which is from around the 22 January onwards. There may be a couple of days of relief until then, but that is the trend. Gathering hay can commence as soon as the ground dries out after 22 January for most of the country. Then you may get a second cut in before this summer runs out mid-February.
As we get further from the northern declination and northerly winds with their tropical heat, and approach the perigee of 22 January and the southern declination, the temperatures will slowly drop and it will not feel like summer. Unfortunately, this may affect the crops that are still unpicked on the trees. But this situation was given plenty of warning last year.
Even though the wind has dropped momentarily (except around Coromandel) and the weather at the moment may feel better, around 15 January it is expected to deteriorate again into windy conditions. Boat owners are advised to bring their boats in and/or to check their moorings. Boat and fishing trips that are planned between now and 22 January should, in my opinion be cancelled and put forward a week. It is just a safety precaution. Is the opportunity to catch a fish more important than a life that could be lost? Stay home and wait a week.
When February begins, it will all be quickly forgotten. People will not recognize the country. We will be consumed by heat waves during the second week. As school starts, the children and you would be better off holidaying by the beach. Children learn more when they stay away from school, out of reach of the false, fake, and damaging propaganda about vaccines and climate change. They need time away from interfering adults getting in their way, and insisting on covering up their bodies. Left alone with each other they need time to rediscover their own freedom, and create new memories of getting up to harmless mischief.
Lots of reports of extreme weather until you look for it! 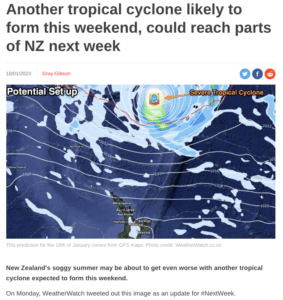