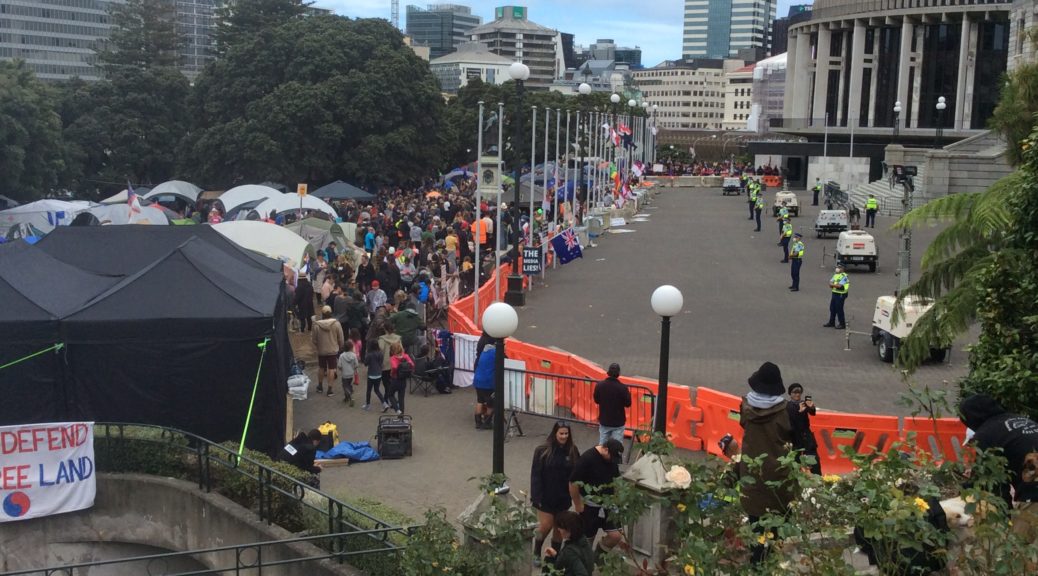 The leaders of the main groups at parliament put out a joint statement which was read out yesterday.

It has taken some effort for me to find a copy and of course, there is no mention in the media, let alone a response from the government

Today marks one week since tens of thousands of New Zealanders from all walks of life, ages and ethnicities came together in a peaceful protest.

They travelled from all over the country and have been supported in many ways by hundreds of thousands of Kiwis.

They are united in condemning the government’s flagrant breach of human rights, deliberate divisiveness, and discrimination. The constant law changes are inconsistent with the government’s duties to the New Zealanders it was elected to represent.

The protest is a result of immense frustration and concern. People are outraged by the conduct of the government and its lack of respect, dismissive attitude and unwillingness to engage.

The position of protestors and the government have become entrenched, but this protest can end.

This communication summarises the views of the majority of groups present at Parliament today:

We have come together and we are in agreement that the Covid-19 Public Health Response Act and all the orders and mandates made under that legislation must be revoked immediately.

The government needs to lift the unnecessary mandates, and an urgent meeting has been requested with senior cabinet ministers to open dialogue.

The infection fatality rate of Omicron is lower than the seasonal flu. Before the global pandemic, it was considered ‘normal’ for 500-700 New Zealanders to die from the seasonal flu each year. On average, 100 Kiwis die each day from various causes. There needs to be perspective.

The Traffic Light system, the ‘no jab, no job’ laws and other mandates are discriminatory, unjustified and a breach of fundamental human rights.

Not one Government representative has engaged in dialogue with the peaceful protesters. Their response of soaking the ground with high-pressure irrigation, bright lights, blasting music and ads at the gathering is infantile and highly unhelpful to bringing about a resolution. We are concerned that unless these tactics cease, they could cause significant damage to any trust held by the protesters that their elected representatives are interested in listening to them.

In addition, the behaviour of the Police last Thursday was unconscionable. New Zealanders, our friends, and the media worldwide watched in horror the deplorable and unlawful police conduct towards peaceful protestors, including women and children.

We reiterate that our request is that the Covid-19 Public Health Response Act and all the orders and mandates made under that legislation be revoked immediately in accordance with the principles of justice, democracy, respect for human rights, equality, non-discrimination, good governance and good faith.

Until the end of the mandates, participants are determined to maintain their presence.

The media is grossly misrepresenting the situation. The protestors are friendly, peaceful, hardworking New Zealanders who are pro-medical freedom. Government and media must stop their deliberate and sustained misinformation campaign.

Protesters have sent a letter to all MPs requesting an urgent meeting with senior cabinet members to open dialogue.

The government is yet to respond.