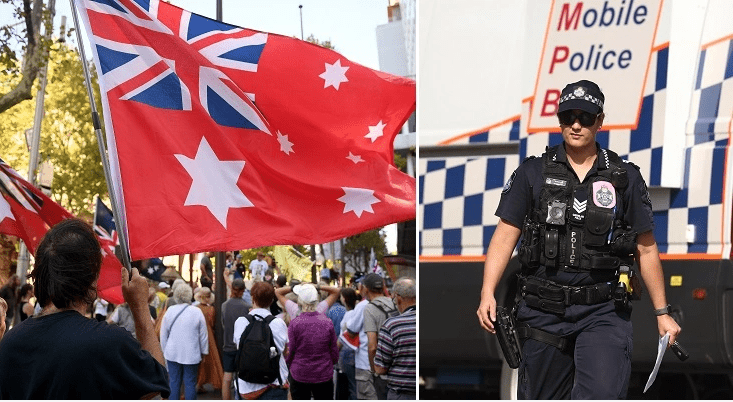 While little is known about the motives of Gareth and Nathaniel Train, radicalisation and conspiracy experts say their case may be an example of broader, concerning trends.

Experts have warned about the violent potential of Australians expressing anti-government sentiment and espousing sovereign citizen ideology, as Queensland police flag an investigation into the Wieambilla shooters’ online activity.

On Tuesday, Queensland Police commissioner Katarina Carroll told the ABC that police are looking into the web history of Gareth and Nathaniel Train, the two gunmen who killed three people, including two police officers, on a remote property in Queensland’s Western Downs.

An online user who went by the name “Gareth Train” was an active participant in Australian fringe conspiracy forums and websites. The account had frequently posted paranoid, bizarre comments that showed anti-vaccine, anti-government and anti-police views.

The user spoke repeatedly about the belief that the Port Arthur massacre was a false flag event carried out by nefarious forces to justify restricting gun rights in Australia. They also claimed they were being surveilled and shared anecdotes of hostile interactions with police.

“If you are a conservative, anti-vaxx, freedom lover, protester, common law, conspiracy talker, alternative news, independent critical thinker, truther, Christian, patriot etc etc expect a visit from these hammers — they are here to kill, maim and take you to re-education school,” they wrote.

Little has been made public by police about the shooters’ motivations for the attack. Experts who spoke to Crikey stressed that understanding the reasons behind an act of violence like this can be a difficult process and cautioned against speculation until more information comes to light.

However, they mentioned that aspects of what is known about the Wieambilla shooters highlight concerns about extremism and online radicalisation in the community and the potential for violence.

Deakin University senior research fellow and extremism researcher Dr Josh Roose said the information available on the Train brothers raised a number of red flags for extremist behaviour, including the apparent involvement in online conspiracy spaces and their isolated, rural existence — similar to that of the Australian responsible for the 2019 Christchurch mass shooting.

Roose highlighted that a belief in sovereign citizen ideology that Gareth Train appeared to espouse online was a major concern. Sovereign citizens are a loose movement of people who believe that government institutions and laws are illegitimate and do not apply to them, typically due to misinterpretation or misinformation about the legal system. Roose said that the anti-government sentiment inherent in sovereign citizen ideology leads to conflict between believers and the Australian legal system and law enforcement.

Roose pointed out that the Gareth Trainer account’s COVID-19 denialism was consistent with a broader trend of a pandemic-fuelled radicalisation, a phenomenon warned about by ASIO boss Mike Burgess last year.

“During COVID-19, the seeds of distrust, the sense of anger and alienation were really seeded across the wide spectrum of the community,” Roose said.

Research conducted by Marques in 2019 found that 12% of Australians agreed or strongly agreed with the conspiracy theory that the Port Arthur Massacre was an orchestrated false flag event with the intent of restricting gun ownership.

Conspiracy theories like this provide believers with a way to understand a complex, random and unjust world, according to Marques, but seem to contribute to distrust in authority and violence.

“We know that belief in conspiracy theories makes people more likely to partake in everyday crime, and makes them feel like society is breaking down and getting worse or is in decay,” he said.

Marques said we may never know how the Wieambilla shooters’ fringe beliefs played into their actions, but that there is evidence showing how broader social factors can contribute.

The link between conspiratorial beliefs and social factors such as social alienation, trust in government and even income inequality, he said, are a reminder of the importance of ensuring social cohesion.