I have travelled widely but never to the United States. However, I have studied American history (especially the Civil War and Reconstruction) and unlike with other countries where one has to make a real effort US culture, if not imbibed through one’s mother’s breast milk was through years of television.

How have we come to this

I feel the need to try and clear my head, so insane and convoluted things have become.

Most people are interpreting recent events in the United States through their own prejudices.

But I am TRYING not to do that although it might give me a temporary degree of certitude to just follow someone else’s idedology.

I have done that in the past and the experience of the recent past has sent me on a crusade against ideological positions and a determination to try and balance differing, and frequently-contradictory interpretations.

So, I have quite a lot of sympathy for the following:

I know it’s going to be difficult to accept what I’m about to say because people get very invested in their chosen narratives, but it’s important that you at least be exposed to the notion that it’s all true.


That is largely because what we are talking about is the rapid collapse of an Empire and,indeed the rapid implosion of the Living Planet and that is a very messy process.

Since I started my blog 9 years ago the destruction of the Living Planet has been my alpha and omega. However, you will have noticed by now that I am giving less attention to it than I was. That is not because I am any less concerned than I was before but that I no longer feel the need to persuade anyone – if they haven’t already they probably never will.

None of the things I have been talking about have gone away; not the sixth extinction; not abrupt climate change; not the constant wars to grab resources; not economic collapse. Not one of them.

Given that I am confronted simultaneously, every day with my own mortality and that of human civilisation I am no longer wanting to adopt positions on these things. I am more interested in people’s values and how they get on with each other.

Unfortunately, that has to come along with a greater capacity to forgive people because people have almost universally lost their sense of balance and have become very, very angry as they lose the comfortable world they have become used to.

I have lost numerous friendships, not because of anything that I DID to anybody but simply because I have a differing perception or even do my own research that puts me at odds with their increasingly ideological position.

My own background is one where as a youngster I felt constrained by conservative life on an island at the bottom of the world so I rebelled against it.

I have had a lot of time to look at this, and to some extent, repent for my past.

Now, as the world goes to Hell in a hand basket I am more appreciative of social stability  and ordinary folk who just want to live their lives as best as they can.

I still have an abhorrence for all injustice but gone is the burning desire to change the way things are. The problem is that we are imperfect (the Christians would say sinful) so it is the height of hubris to imagine that we can do better than the Creator.

Positive changes have come from people’s ongoing struggle for justice and what we have achieved has been hard-earned. Revolutionary changes have never brought anything positive (or almost anything).  It took almost a century for France to recover from their Jacobin revolution and the 1917 Bolshevik revolution brought a lot of achievements (such as freeing women, abolishing illiteracy forever) but how can one ever say that these achievements made the elimination of whole classes of people and the deaths of untold millions?

In looking at the trajectory I like to be as specific and factual as I can and to try and look at differing points-of-view,  The one I do reject entirely is the liberal one, pushed by globalist politicians, institutions and media.  The level of delusion and mendacity is such that I can almost reject what they say out-of-hand.

I have been listening to TruNews for a while  – it was their discussion of zionism that first attracted me in the first place.  I find their analysis detailed and quite credible. Sometimes, however  I listen and find myself turning them off because I disagree quite violently with aspects of what they say.

SINGLE NARRATIVES DO NOT REACH THE TRUTH

For instance, there is a lot of talk about a communist insurgency.  Another reason I reject the mainstream media is that they deny things that are absolutely true and demonstrably so.  However, that does not mean that I agree 100% with the other side.

I have seen more than sufficient direct evidence to demonstrate to me that there Is an insurgency that is being pushed by someone and it is from the Left.

The mainstream media has a single narrative and it all revolves around of getting Trump out of the White House and returning to “business-as-usual”. Over the years I have seen constant lies – from the Syria war, to Russiagate, to Trump having dementia – all of it demonstrably false.  Now they are telling us that what we have are “protesters” against the singe case of a murder of a black man by a rogue cop. If there is any looting then it has to be from far-Right extremists.

You will have to excuse me if I say I am not convinced by the stories from mainstream media. They are replete with accusations and remarkably free of evidence.  All the while they say there is “no evidence” for something that there is plenty of evidence for.

When I am trying to make up my mind abut something I usually look for some evidence that might come in the form of a document, or a video showing rioting Antifa or of bricks left behind on street corners.  It is very strange that DESPITE the 24/7 censorship by social media I can find this material every day.  It is also strange that despite the push in media and social media I am very hard-pressed to find evidence for the mainstream media.

Perhaps I am ignorant of what is boiling underneath the surface but I might have thought that people would have come out to protest against the murder of Mr. Floyd for a day, even two days and then gone back home to whatever remains of  normal life.  I would have to ask why this hasn’t happened and things continue to get worse.

Anger is boiling over everywhere so I am sure that there people on the Far-Right making trouble.  To put it mildly the far-Right militias in the United States are not my demographic.  Whatever violence there might be from that quarter I have my doubts that these folk have a honeypot available to them like George Soros and others.

This is from Fergusson and Black Lives matter from a few years ago.

Now we come to the conservative Right.  It seems to me that they represent the “Silent Majority” and they are mostly decent folk that once would have been god-faring, although I have my doubts about that now.

One part the left does have right and that is about police brutality.  Folk would like to believe that the police in the United States are like Andy Griffith, from the 1960’s. However, a day doesn’t go by when I don’t see a story of someone (almost always black) being murdered by police. It is well-known that police will kill any black for a minor infraction while a white person will walk away free for after committing something far worse.

I am not in a position to comment on the reasons for this – except for saying that the situation is similar in my own country.  It is true, I am sure, that the majority of police are decent people but the rogue cops are very obvious. 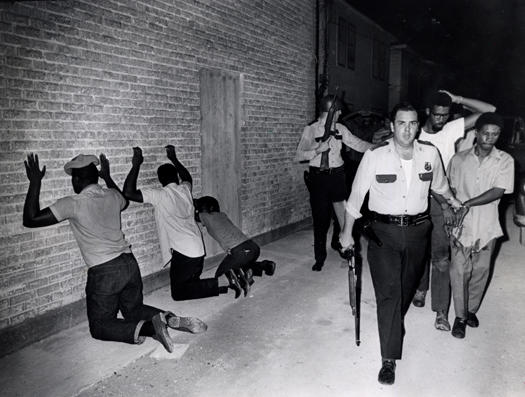 Every country has dark pages in its history – its own shadow – Russia, China, Britain – the list goes on. America’s is its own legacy of slavery and genocide against the Native American population.  This can only be made conscious and acknowledged for any healing to happen.

What is happening is the very opposite of that. Accusing ordinary people of being racist ( find me a person that is free of prejudice) and tearing down its cultural and historical heritage is only a way of opening up the wounds and ensuring that healing cannot happen. It is a way of dividing the population and setting them against each other.

The strategy so far is working brilliantly.

I think the situation is messy and contradictory and that is because the American Empire is in collapse.  We have had economic and financial collapse since 2008, the rise of fascism since before that; now we have social collapse. Once we start to experience political collapse I think the entire nation is in danger of collapse.

From what I have seen the response of Trump to the events of recent days shows he has lost control of something that he has never had control of because of an attempted coup that has gone on for four years.  His response is not one of  “Hitler trying to expand his power” but the reaction of ANY government that is faced with a situation like this that involves a degree of sedition.

I would say that NO government could act differently when challenged in a similar way.  We need look no further than events in France with the Yellow Vests (which has been ignored universally by the media) or the riots in Hong Kong (that were encouraged, aided and abetted by the West).  It does not matter how much one dislikes the regime in Beijing – it does not take away from the truth that these riots happened with support from outside forces.

I have no doubt that certain outside governments will be quietly celebrating what is happening in the United States but I doubt they have the ability to foment this.

Despite evidence of this being pushed by dark forces within the United States,  the main factors are internal.  This has been several years in the making and can be seen as coming from what happened at 9/11 and 20 years of constant war on multi fronts without any success other than creating mayhem.

So, in conclusion, this is not Russia (the Democrats), it is not China (the Republicans) but is due to internal processes within the United States itself.  A country that was always an  imperial power trying to impose its will on those smaller and weaker than themselves has lost its way.  It once was conservative and god-faring but this has been replaced by some very dark forces.

That is what happens when a once-great country collapses.

One thought on “A reflection on the collapse of the United States of America.”