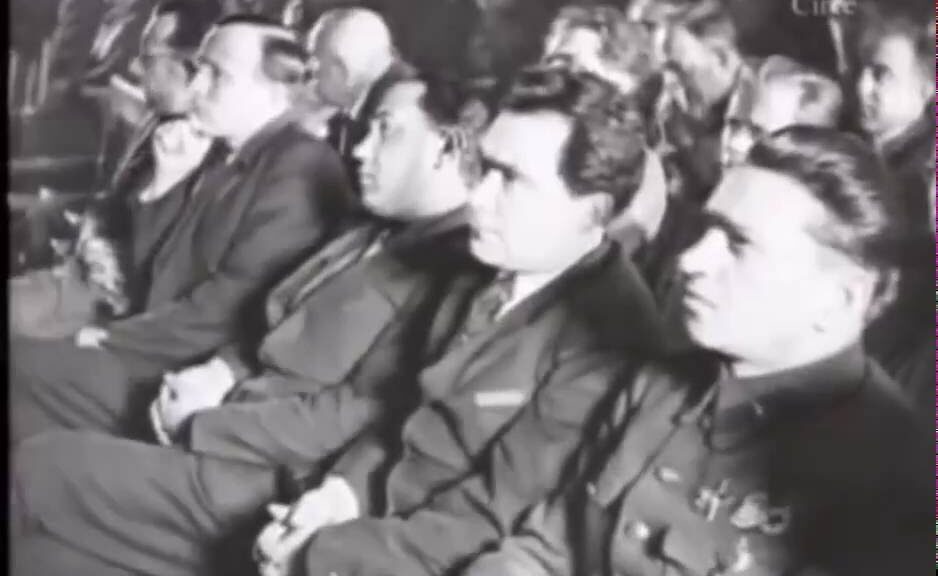 Stuff crowns itself the arbiter of truth

The media site’s grip on “facts and science” is selective and shaky.
They make the comparison with the McCarthy witch hunt trials in the 1950’s. Elsewhere, someone makes a comparison with Burma.
I don’t actually think that captures the reality of the situation fully. I think the most apt comparisons are with totalitarian regimes of the 20th century and I will explain why.
The other day I spent quite a bit of time putting together an item from the Hal Turner show

It did not seem to have attracted much attention but in my view it bloody – well should of!

If we take Hal Turner at his word it came out of a meeting with top representatives of the financial elite using what he described as “extreme techniques”.

It is a very stark vision but one that resonates with other warnings that have been coming out of late but explains things in a way that even the more dim-witted could understand.

All of these commentators COULD be wrong and one might pray that they are although that would still leave many unsolved riddles.

To dismiss it you would have to prove that Hal Turner is lying and just making it all up OR demonstrate that you know better than anyone else, all of which comes easy to ill-educated, intellectually-challenged and largely testosterone-filled males.

I would say there is sufficient to sit up and pay attention. What is happening in New Zealand is not isolated and has to be seen in context.

For example, this came out today from Biden’s press secretary.

This afternoon, August 31, 2022, White House Press Secretary Karine Jean-Pierre said “. . .MAGA Republicans are the most energized part of the Republican party – that extreme, this is an extreme threat to our democracy, to our freedom, to our rights,”

She just reported that the President of the United States sees half the nation as a threat to the nation itself!

How do you spell civil war?

And now to back Down Under. In the past both through personal contacts and a familiarity with 20th century history allowed me to get an insight into what it was like to live under communism in the Soviet Union.

The USSR, which never ceased to be a tyranny went through a dark period in the 1930’s, under Stalin where being on the wrong side of the ruling hysteria could cost you your life.

Obviously in western, formerly-democratic societies there are no (at least, not yet) gulags and no one gets a bullet in the back of the head.

However, we do live in a society of denunciations coming from our politicians and media are being normalised and we have seen how the reputations of lives of those who dare to stand up to the State and refuse to be injected with a deadly mRNA experimental jab are cancelled and despite their terrible sufferings are subject to attack and ridicule.

One of the more seering examples of this is here

I have become persuaded of the parallels because we have seen examples of some of the worst aspects of the Soviet regime (and others like it) with media vilification and without proof, relying not only on and innuendo but the most extreme labels and epithets (“conspiracy theorist” and “disinformation”), leading to anonymous denunciations if only to the media and not to the secret police.

In the past few days I have become a case where an individual became convinced that “dangerous extremists” were “infiltrating” his organisation.  Instead of raising the issue with his colleagues or minding his own business he rang up an editor friend in stuff.co.nz “to ask advice” and during this conversation gave the names of his colleagues from which the newspaper was quickly able to find the telephone numbers.

In other words, we have baseless paranoia, denunciations and stool pigeons in our midst. These are the distinguishing marks of a totalitarian society and are impossible in an open, democratic society which New Zealand, despite a few blemishes always has been.

In recent days we have had the arrest of Kelvyn Alp and Hannah Spierer of Counterspin media for allegedly posting “objectional material” 10 months ago. What is the objectionable material?

I understand it was an analysis of the livestream of the  Christchurch shooter, Brenton Tarrant.

It seems to me that even the hotheads on social media have been cowed into silence on this but the truth is that analysis reveals that Tarrant was not a sole shooter as he is being described but had people helping him. I knew that, by the way from interviews with witnesses, (later suppressed) that were broadcast on mainstream media.

I am left with no doubt that this action by the government  was entirely political and my assumption is that Counterspin had some stories in the works that would be highly embarassing to Jacinda Adern’s government.

Here is just a little from mainstream media coverage.

Two far-right activists who had to be dragged to the dock in Christchurch District Court this morning refused to take part in the court process, read statements from the lawyer’s bench, and spoke over and ignored the judge.

Co-owners and presenters of the far-right Counterspin platform, Kelvyn Alp and Hannah Spierer, faced charges for distributing objectionable material and failing to comply with police orders.

They were accused of sharing a version of the full live-stream footage of the Christchurch mosque attacks which killed 51 people.

Outside a crowd of about 60 people turned out to support the pair, along with a small group supporting the Muslim community.

Inside, Alp and Spierer refused to take part in the court process.

Instead, they read statements from the lawyer’s bench, spoke over and ignored Judge Jim Large.

Hannah Spierer asked the judge if he was making her an offer to settle the matter and said they were only there under duress.

After a heated back and forth, the pair were eventually pushed into the dock by security and police, and were later taken out by officers when they refused to leave.

A crowd of Counterspin supporters rushed to the pair afterwards, screaming they loved them.

Two far-right activists have been forcibly dragged up to the dock and then removed from a Christchurch courtroom this morning.

‘It is nasty here today’: Inside the Counterspin court protest in Christchurch

“It is nasty here today,” a policeman comments as Counterspin supporters jeer at a group of counter protesters on the steps of Christchurch’s courts.

Amid the mainly middle-aged, 100-strong crowd, a few shout racist and homophobic words, goading those trying to make a peaceful stand against hate speech and misinformation. 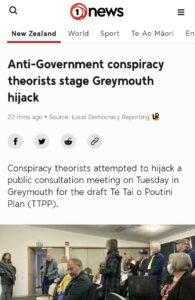 Grey district councillor and an alternate member of the TTPP committee Peter Haddock said about 10 people “tried to hijack” the meeting of about 40 by objecting and voicing “anti-government, anti-legislation” sentiment.

What this describes is a rowdy meeting with heckling – something that was part of the life and blood of a FUNCTIONING DEMOCRACY, together with demonstrations and direct action.

In my 66 years in this country that is the way it has always been.

But no longer, it seems.

Instead, now, these unelected technocratic functionaries would like to make their decisions free of public scrutiny.

Welcome to the future!

These “journalist” hacks who produced this propaganda have received their 20 pieces of silver. History demonstrates that such willing participants in a lie often end up outliving their usefulness.

Listen to these words of Counterspin’s Hannah Spierer which read like a message to the Nation and reflect great courage in the face of the State clobbering machines.

I cannot fault a single word of her’s.

Kelvyn, by contrast, is a little more testosterone-filled.

KELVYN in a statement to mainstream media outside court after his appearance today. 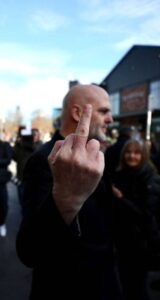 “You guys don’t like us and we don’t like you. That’s just a fact. You guys are bought and paid for journalistic whores.”

It is the women who are leading this (literally) life-and-death and death struggle because this is about protecting the next generation.

Just you try getting between a mother and her young and ask why there is such an attack on womanhood everywhere.

Perhaps us guys should just step aside and let the women lead the charge?

Parallel with that the NZ police fished around on the Interpol for information that would allow them to refuse entry to New Zealand  of a couple of journalists who were coming to cover a demonstration that was not to the taste of PM Jacinda Adern.

Look at Adern’s body language in this piece.

Whatever else, Australia does still have a far more robust media than New Zealand.

Here, aggressive journalist, Shaun Plunkett puts Avi Yemini (who I have to say I do NOT LIKE) through an interrogation only to agree with him about the nature of what has happened.