I see McPherson’s position as complete hypocrisy, if not worse. He does not apply the standards he demands of others to himself.

If someone gives an opinion that accords with his own but if they present actual evidence that is just an opinion. 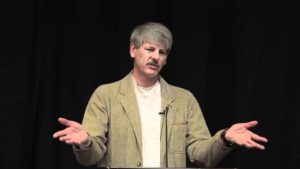 “The problem here is that his dogmatic dismissal of the lab leak hypothesis is itself unscientific.

If you want to see a rational scientific assessment which casts doubt on the zoonotic argument, listen to Bret Weinstein for an example of it.

Moreover, this dismissal objectively puts McPherson on the side of those scientists who may have been corrupted in their pursuit of or defence of dual-use gain-of-function research, in contrast to his stance against Michael Mann, for example, on abrupt climate change.“

2 thoughts on “A very apposite comment on Guy McPherson”