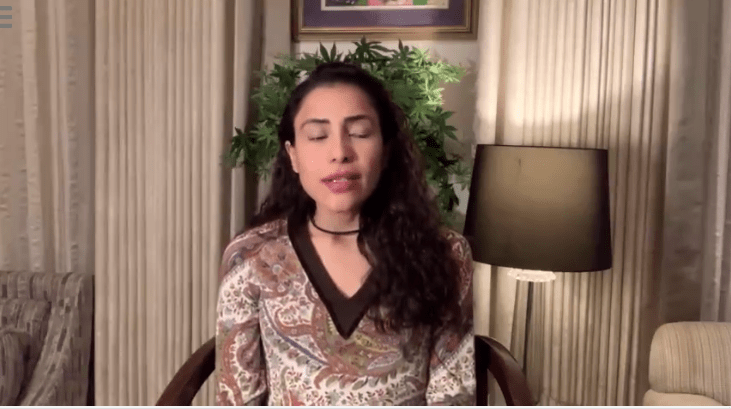 WITH LOVE FROM INDIA- WE ARE COUNTING ON NUREMBERG 2.0!

I have amplified the audio here, which may make it a little more audible.

Robin Westenra · WITH LOVE FROM INDIA- WE ARE COUNTING ON NUREMBERG 2.0

I have done some rough notes from the presentation,

This interview confirmed much of what I have been suspecting about the sudden “outbreak: of covid-19; Just in February they were trying to work out why COVID levels were so low.

Basically, India is a divided country with a tiny proportion of middle class and rich people living in the cities while the great mass of people eke out a survival in the villages.

This middle class are basically what she describes as idol worshippers for whom “doctor is God”.

There is no opposition, no pushback to what is happening ; in fact, she says you cannot call it a minority it is so minuscule.

Such deaths as there are (which are a miniscule proportion of deaths in the population) are among the educated middle class who have access to all the media propaganda and believe in it absolutely.

They are the segment of the population that have access to hospitals and vaccination.

She talked of some of the falsehoods perpetrated by the western media and cited the NY Post article that used a photo of a gas leak in 2020 to demonstrate their contention that people were literally dying in the streets.The impression is created that the situation is so bad that people are being burned outside. This plays on people’s ignorance because, as we know, India is predominately a Hindu country and it is an ongoing tradition that the dead are cremated in the open air on a funeral pyre.

It is the people who have access to education and to mass media in India that are dying while the vast majority are unaffected. She divides her presentation into 10 basic points as follows.  I will only reproduce what is specific to India.

Fear- mongering creates fear and panic. Middle class people are very trusting in the media and censorship, and like people in the West rely on the “factcheckers” and treat them as trusted sources

The middle class people take PCR testing for granted while the ordinary people are out of the loop.

As in the West influenza has miraculously disappeared.

4.Hyper- apnoea from use of masks

People are suffocating themselves.

The fear of police is very high (and ubiquitous)  in India; police are basically gangsters who can grab you and beat you. You can never get justice. She talked of a small business operator in Mumbai who was beaten so badly for having his business open that he died on the spot.

People can be fined 2,000 rupees for not wearing a mask alone while their car. People know it is harmful but out of fear won’t question, they just wear the mask.

Since the second wave media is recommending people wear masks in their houses, alone in their bedrooms

5. Overuse of oxygen and over-treatment with wrong treatment

A large part of why Indian people do not recover is dehydration. It is very hot and the water supply polluted. There are a lot of water borne illnesses in India.

She identified other aspects such as the inappropriate suppression of fever which keeps the infection in the upper part of body and prevents it going into the lungs along with the body’s innate immune system,

She singled out the use of some drugs such as Remdesivir from which, she says 90% of people died. The people who don’t receive these drugs don’t die.

6. Rollout of the vaccine

Earlier, Ivermectin was prescribed but in August,  2020 was removed as a recommended treatment which led to a spike in deaths.

Since then the number of deaths has surged, corresponding to the end of treatment with Ivermectin and the introduction of the vaccine.

There has been no vaccine rollout in the villages due to the extreme shortage, so the bulk of ordinary Indians have been spared.

One of the Indian “vaccines”  Covishield vaccine is actually just AstraZenica  sold under a different name.

Vaccine deaths are always recorded as “coincidental” and have nothing to do with the vaccine.

7 The cultural background in the country

Collectivism and obedience are a natural part of Indian culture which comes from the predominant Hindu religion and the doctor is regarded as God. This translates into an extreme trust in medicine.

Doctors, like in the West, are very arrogant but much more so.

She talks of a lack of access to alternative information. In her estimation the urban middle class has little mental capacity to think for themselves or body awareness.  Consequently they are unable to make the correlation between injury and its source. People have little concept of constitutional or human rights; consequently there is no resistance

Most people get the Internet through cellphones – few have home access. Most are insufficiently educated to type and most information comes through You Tube and is just entertainment.  This is the land of Bollywood!

She offered this sharp criticism of Indian society but balanced it by saying ordinary folk have an intuitive sense of what is going on.

She repeated that people in the cities are eager for the vaccines and how opposition is miniscule.

India under Modi is a long way down the road a to China-style social credit system and of control of the many by the few. It is well along the road to an oligarchy.

Prior to a few years ago there was no national system of identification.

From 2012 India has the Aadhaar ID – biometric data, fingerprint and iris scan system that covers about 90% of the population – about a billion people.

Just in the past few days Narendra Modi has announced a new policy whereby the wealth of people to be mapped out in villages.

The same man who came up with the Aadhaar card is, along with Modi,  part of the WEF Davos crowd

Modi has removed subsidies for the common farmer which previously had allowed them to survive.  She says genocide through starvation will come more easily in India than elsewhere.

The changes gave control of the food supply to the corporations.  Can’t compete with multinationals.

Farmers will be forced to sell their land giving control of the food supply to the corporations and 265 million people will starve.

When there is lockdown the people in the cities are supposed to go home but there is no work for them. These people do not have the reserves that people in the West that allow them to survive.

This is further discussed here

Indian Farmers’ Warning: If Our Resistance Fails, They Will Starve The World To Death

An interview with a man who explains the situation with the Indian Farmers. He believes that permanent lockdowns are a political ideology being used as a tool for an ongoing fascist takeover, by people who are trying to take control of the food supply, causing break down of the food supply chain and mass famine. “There is the same attempt being made in Britain to take over the food supply… in Europe, the UK, Asia and the world” ; and food shortages will impact the world harder than any disease.

Two Videos from New Delhi that contradict the MSM narrative

On this episode of Going Underground, we speak to Dr. Vandana Shiva, the founder and president of the technology and natural-resource policy foundation Navdanya, who was awarded the Right Livelihood Award, also known as the ‘Alternative Nobel Prize’. She discusses the recent avalanche in Uttarakhand, which has left hundreds missing, and the causes behind it. She also explains how the World Bank’s actions in 1991 were arguably the start of Indian farmers’ battle with global capitalism, and why India’s farmers are organising en masse to oppose Modi’s neoliberal farming laws. Dr. Shiva talks about multinational farming corporations and their war on India’s independent farmers, the history of the spread of GMO technology such as ‘Roundup’, why a transition away from industrial farming back to small-scale farming is needed to fight climate change, and much more!