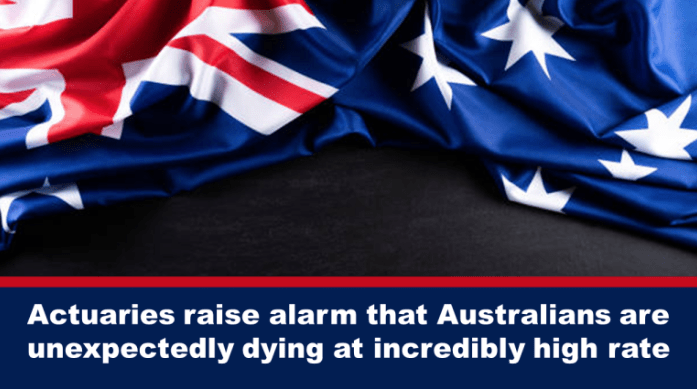 The Australian government should be urgently investigating the “incredibly high” 13% excess death rate in 2022, the country’s peak actuarial body says.

An extra 15,400 people died in the first eight months of the year, according to a new analysis of Australian Bureau of Statistics (“ABS”) data by the Actuaries Institute, with around one-third of those having no link to Covid.

Karen Cutter, an actuary of more than 25 years and spokeswoman for the institute’s Covid-19 Mortality Working Group, said 13% was an “incredibly high number for mortality” and that it was “not clear” what was driving the increase.  “Mortality doesn’t normally vary by more than 1% to 2%, so 13% is way higher than normal levels,” she said.

At the beginning of last week, the Working Group released an updated analysis of excess mortality in Australia. The analysis was based on data from the ABS for deaths occurring before 31 August 2022 and registered by 31 October 2022. It revealed 10% excess deaths for August alone and 13% cumulative excess deaths for the eight months up to the end of August.

The Actuaries Institute is the professional body representing the actuarial profession in Australia.

We have selected the tweets regarding the cause of death and you can read her full thread on Thread Reader App HERE and the accompanying blog of the Working Group HERE.

After removing “from” and “with” Covid deaths, significant excess remains – particularly around the time of peak Covid (Jan) and flu (June/July) – which suggests delays in emergency care having an impact and/or possibly undiagnosed Covid, Cutter said.

Below is a summary table of total deaths to the end of August 2022. There is a clear increase in ischaemic heart disease (17%), the biggest contributor at 1,490 deaths.  There are increasing trends in cancer and cerebrovascular deaths.  And diabetes is higher than expected, which has been the case throughout the pandemic, Cutter tweeted.

The blog summarises the table above for January to August 2022 as follows:

Australia has a very good vaccine approval and safety monitoring processes, administered by the Therapeutic Goods Administration.  The latest vaccine safety report (to 17 November) shows that, of the 944 reports of death following vaccination, only 14 were found to have been caused by the administration of the vaccine. In addition, the vaccine rollout ramped up slowly from February 2021, with high rates of vaccination in August to October 2021 and again in January 2022, but has been low for most of 2022.  This does not fit with the timing or shape of the excess mortality.

However, as noted by The Daily Sceptic, the increase in heart and stroke deaths in particular has led many to suggest the Covid vaccines may be to blame.

Earlier in the year, Australia’s Therapeutic Goods Administration (TGA) countered this claim, telling ABC Fact Check that it was “false and unscientific to automatically conclude that vaccines caused these deaths. There is no credible evidence to suggest that Covid vaccines have contributed to excess deaths in Australia or overseas.”

This is untrue, of course: there is plenty of evidence from autopsies and other sources that the vaccines can kill, including silently and suddenly by triggering auto-immune attacks on the heart that can only be identified at autopsy. Their role thus cannot be ruled out without proper investigation.

Ms. Cutter even admitted that she “cannot prove” the vaccines are not involved, albeit as part of a denial that they are: “There is zero evidence that vaccines are causing these deaths as far as I’m concerned, but I cannot prove it.”

She argued that even if the 947 deaths in the TGA’s most recent safety report were confirmed to be linked to the vaccine (the TGA has to date only confirmed 14 as linked), it would only be a fraction of the total excess deaths. This doesn’t allow for under-reporting of vaccine injuries, though, of course.

She also claimed the timing of the excess deaths “doesn’t match with the vaccine rollout, and the age profile of people dying does not match with people who’ve been vaccinated”.

However, this doesn’t allow for people dying some weeks or months after their injection, perhaps due to an auto-immune attack triggered by a new challenge from the virus. It also doesn’t allow that vaccine deaths may be concentrated in older people with related co-morbidities. In addition, it overlooks that there are indeed excess deaths in younger people, as Ms. Cutter has acknowledged.

Did lockdowns cause an increase in Mortality?

The Working Group gave 8 possible explanations for the excess deaths.  Above we discussed the eighth: vaccine-related deaths.  Of the other 7 factors which they concluded may have had an impact on excess mortality in 2022, some related to shutting down society, although only one specifically referred to it:

Even when you take out all the questionable “Covid deaths” you still have easily identifiable overall excess mortality in 2021.  So, removing Covid data – because of the confusion between died “from” and “with” Covid and because the purpose of lockdowns was to reduce Covid deaths – the remaining causes of death, as categorised by ABS, can be further categorised as either sudden deaths or chronic deaths.

Causes of sudden deaths then consist of ischemic heart disease, cerebrovascular (strokes/aneurysms) and respiratory illness (which may not be instantaneous but occurs over a much shorter time than chronic illnesses).  And chronic deaths result from cancer, diabetes and dementia.

So, according to ManDownUnder, under the theory that lockdown deaths would see a rise in chronic mortality partially offset by a reduction in sudden mortality, we should see the following in 2021:

However, ABS data shows chronic mortality rose in 2021 at the expense of sudden mortality.  Although we haven’t included them here, ManDownUnder has included all the graphs demonstrating this in his article.

There is no further need for discussion, ManDownUnder concluded.  “Lockdown deaths are real, easily verifiable, and a crime committed by the Australian political class (and associated “medical” cartel) on their own citizens.”