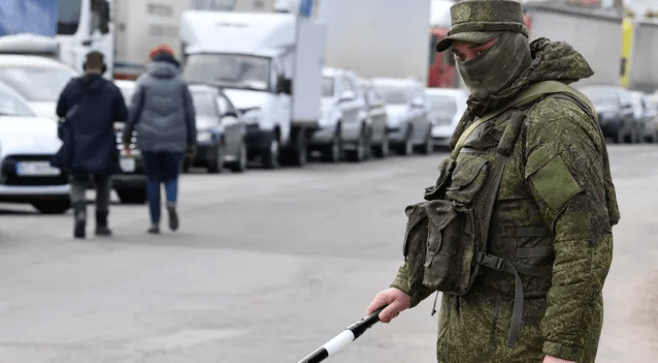 I think it is useful to look at what the Russian media says [and I do not mean RT and Sputnik] rather than what western supporters are saying.

The departure of our army from Kherson to the left bank of the Dnieper provoked the expected reaction from a part of society – what a horror, everything is gone. They also repeat one of the most famous phrases in Russian history: “What is this – stupidity or treason?”
These words were uttered 106 years ago, on November 14, 1916: at a meeting of the State Duma, the leader of the Cadet Party, Pavel Milyukov , in his speech denouncing the authorities, posed the question point-blank: “What is this – stupidity or treason?” Among the accusations thrown in the face of the highest authority – the royal court and the government – the main one was that she was looking for a “shameful peace” with Germany . The leader of the opposition named (prudently quoting the German press) those who supposedly make up this traitorous party: among them were Prime Minister Stürmer (from Russian Germans) and Grigory Rasputin. Milyukov’s speech was banned by the censors, but it was on the lists. A few days later, Stürmer was dismissed (not because of Milyukov’s speech), the next month Rasputin was killed – and two months later it was February 1917 …
None of what Milyukov said was true—neither the royal court nor the government were conducting secret negotiations with Germany. But then a considerable part of educated society believed Milyukov, who, after the abdication of Nicholas II, became the Minister of Foreign Affairs of Russia and tried to wage the war to a victorious end. But the army without a king at the head (who was, after all, also the supreme commander in chief) began to decompose along with the whole country – and instead of victory, we got a revolution, the obscene Treaty of Brest-Litovsk (that is, the loss of western lands, including Ukraine ) and the Civil War. Why remember it now?
Moreover, the indignation at the next statement of our Foreign Ministry that Russia is ready for negotiations with Ukraine is very reminiscent of those same Milyukov sufferings – how is it, why did we fight, we can’t allow a blow to the back of our army, we need to stop the traitors in the elite who are ready for negotiations (secret or overt) to surrender Russian interests! Bad news from the fronts is commented on in exactly the same way – they are leaving Kherson because they want to come to an agreement with the West, start negotiations, and refuse to defeat Ukraine! Here are the traitors – they only think about their skins and capital! It is necessary to expose everyone, remove them and put them on trial, and the one who does not understand and does not do this is a traitor himself!
We have been hearing and reading all this for a very long time, but now there is another exacerbation of pseudo-patriotic hysteria. It covers a small part of society, but this is not good either. Moreover, there is a threat that in the event of defeats at the front, combined with some new announcement of negotiations, neurosis will spread to the broad masses, that is, it will threaten the main condition for our victory: popular unity in trust in the supreme power. To prevent this from happening, you need to know the lessons of history well – including remembering November 1916 – and be aware of what is happening now, distinguish between real and imaginary threats. Russia is not threatened with treason – Putin will never agree to a “shameful peace” either with Ukraine or with the West. On February 24 this year, a historic choice was made, the Rubicon was crossed, after which Russia can only move forward. Stumbling, making mistakes, missing blows, concentrating, even temporarily retreating tactically, but strategically moving only forward. The speed of this movement can be different – it depends on our efforts, and on external resistance, and on the global situation. The words that our Foreign Ministry and even Putin say to the public can also be different – and even very peaceful, but at the same time they serve very specific tactical goals. Not replacing and certainly not canceling the strategic goal, which is crystal clear. Russia returns itself to itself – both territorially and spiritually, and ideologically. The former Ukraine no longer exists, and there is already another Russia on the pages of future Russian history.
Not only with Donetsk and Kherson, but also with Novorossia and Little Russia. And with the rest of Ukraine torn from the hands of the West, which will never again be either anti-Russia or “alternative Russia.” Only one thing can hinder the implementation of this – a split and unrest in Russia itself, that is, doubt in our victory and in the fact that Putin wants and can lead to it. If we again, as in 1917, intoxicate ourselves with hysterical cries of “treason” – only then will we lose. And not Ukraine, but in general everything.

And there is no betrayal in the elites, because those who do not share the aspirations for victory, firstly, have no influence on the supreme power, and, secondly, cease and cease to be an “elite”. Yes, we have a huge personnel problem due to the fact that professionals are often unpatriotic, and patriots are unprofessional, but in an extreme situation, all processes are accelerated, and the formation of a new, state-minded elite (from power to business and culture) will go much faster. But renewal should not be replaced by a search for traitors and traitors in power (excluding, of course, real traitors), we do not need purges for the sake of purges – we need to get rid of weak and incompetent leaders, while relying on the consolidation of all forces that understand the seriousness of the challenges facing us tasks.
At the same time, the country will change more and more seriously – formulating and acquiring meanings, realizing its essence and building a national formula for its existence not just for the period of storm and onslaught, but also for the subsequent peacetime. This is a process no less important than at the front, and it is precisely in it that there should be both maximum trust in each other and the desire to translate the Russian dream into the constructions of a future just social order.

But victory at the front, at the same time, has no alternative for us – regardless of how much effort and time it takes to achieve it. It can be stolen from us not by betrayal at the top, but by those who, out of good intentions, out of stupidity and weakness, or will deliberately inflate panic moods, shouting “everything is lost, treason in the Kremlin.” It is to them that Milyukov’s “Stupidity or Treason?” can actually be attributed. Alas, there are also the second ones among them – those who directly rely on turmoil, that is, they work for the enemy.
And Russian history gives us numerous examples of how to distinguish between real and fictional betrayal – how to distinguish 1612 from 1916. We have learned these lessons.
Stupidity is to look for treason when there is none and cannot be, and treason is to try to kindle distrust of those who are only aimed at winning.