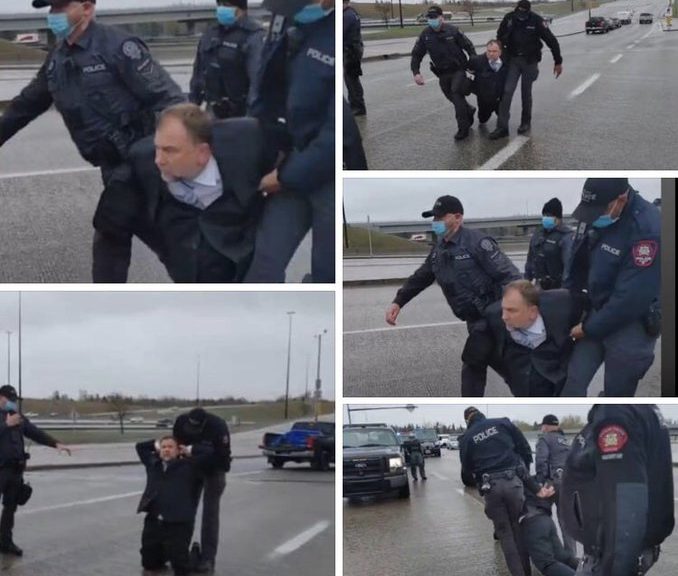 http://www.SaveArtur.com​ They hunted him down like he’s a terrorist.

Police cars swarmed him as he drove home from his church.

They ordered him out of his car and made him kneel down on a busy highway.

Heavily-armed SWAT police arrested him. But he’s not a terrorist.

Watch this shocking police attack for yourself.

Chris Scott, the owner of The Whistle Stop Cafe in Mirror, Alberta, has been arrested.

In a video posted to The Whistle Stop Cafe’s Facebook page, an RCMP officer can be seen leading Scott away to a nearby police vehicle. After a pat down, Scott is placed in the back of the vehicle.

Earlier this week, Scott set up what he called a “freedom park” outside of his restaurant, after Alberta Health Services had the premises locked shut. When Scott announced his plan to hold “Alberta’s largest protest,” police received an emergency injunction that granted them the ability to arrest anyone supporting the rally, anywhere in Alberta.

The injunction received by the RCMP defines these events as illegal public gatherings, and was outlined in a statement released on the federal police’s website:

In support of the Alberta Health Service injunctionrecently granted, the Alberta RCMP are issuing the following statement:

On May 6, the Court of Queen’s Bench granted a pre-emptive injunction against all planned events in contravention of public health orders. The injunction essentially defines these events as illegal public gatherings that do not comply with masking, attendance limits and physical distancing requirements.

Law enforcement agencies can act immediately under this injunction, without the necessity of Alberta Health Services attendance. There are a variety of ways to enforce this order, including the ability to issue tickets, fines and criminal charges to individuals who are breaking public health orders by organizing and/or attending these events. This can include arrest and removal any person who has notice of this Order and chooses to act in violation of it.

We all have a part to play in the provincial COVID-19 response. Our primary role is, and always will be, keeping all Albertans safe, while upholding the law. This includes enforcing public health orders for the health and safety of all Albertans.

Rebel News’ Chief Reporter Sheila Gunn Reid was on the scene today in Mirror, population of 500, to cover the protest held by Scott.

Despite the inclement weather, and the threat of large fines, a number of Albertans still gathered at The Whistle Stop in defiance of the injunction granted by Alberta Health Services.

If you want to help Rebel News fight for Chris Scott’s civil liberties, a donation can be made through FightTheFines.com. Donations made through Fight The Fines are no eligible for a charitable receipt through The Democracy Fund.