(Natural News) Just as Russia has now completed the test firing of its global ICBM “Sarmat” missile system — which can reach any target anywhere in the world with a dizzying array of re-entry (nuclear) vehicles — alarm bells are being sounded over America’s rapid depletion of munitions due to the Russia-Ukraine conflict.

The US Pentagon has shipped thousands of Javelin anti-tank weapons to Ukraine, along with millions of rounds of ammunition, artillery shells, rockets, drones and troop transport vehicles, leading to a sudden drop in the available stockpiles of such equipment should US forces need to defend the homeland.

“General Mark Milley, the chairman of the U.S. Joint Chiefs of Staff, told Congress that the West has delivered 60,000 antitank weapons and 25,000 anti-aircraft weapons to Kyiv. The Pentagon is now laying plans to rush additional artillery, coastal defense drones and other materiel to Ukraine,” reports BloombergQuint.com:

Pentagon officials say that Kyiv is blowing through a week’s worth of deliveries of antitank munitions every day. It is also running short of usable aircraft as Russian airstrikes and combat losses take their toll. Ammunition has become scarce in Mariupol and other areas. This is presenting Western countries with a stark choice between pouring more supplies into Ukraine or husbanding finite capabilities they may need for their own defense.

Even worse, we’ve now learned that many of these systems are extremely difficult to replenish, requiring years of manufacturing to restore supplies. While Javelin missiles, for example, have been sent to Ukraine by the thousands, the United States can only manufacture about 1,000 units a year under current circumstances. (See below.

Contributing to the alarming problem is the supply chain collapse that appears to be spreading rapidly, making it difficult if not impossible for weapons manufacturers to source materials and parts that are needed for their products. In addition, many weapons system suppliers are single-source suppliers, meaning there is zero redundancy in the military supply chain for that component or weapon.

Even worse, many of these single-source suppliers rely on microchips or other parts from China or Taiwan, meaning that such parts may be impossible to get during a world war.

And finally, wrapping up the dismal reality of the situation, America’s industrial capabilities have plummeted over the last two decades. Combined with the fact that so few Americans want to carry out anything resembling “work,” there is no ability for America to repeat its World War II feat of out-producing the Third Reich and the Japanese Empire. In the 1930s and 40s, America carried a strong work ethic and an outstanding industrial output capacity based largely on domestic sourcing (of steel, for example). Today, America has collapsed into a nation with very little domestic manufacturing and almost no remaining work ethic. The primary thing “produced” by America is fiat currency (debt notes) which obviously can’t replace steel. Other American exports include libtard cultural insanity, pedophilia (grooming), Big Tech censorship and Orwellian tracking technologies.

In essence, America produces very little other than debt, misery and insanity. (Plus quite a lot of food crops, when fertilizer is available.)

You can’t “print” your way to military readiness

As analysts are now coming to realize, you can’t print munitions and weapon systems. Yes, you can print money and make believe you have an abundant economy, a rising stock market and high currency velocity, but those are all fictions based on currency counterfeiting by the central bank.

Military weapons, on the other hand, have to be manufactured out of real things. Copper, steel, electronics, gunpowder, aluminum, etc. And these real things are increasingly difficult to acquire, largely due to the West’s insanely stupid economic sanctions against Russia which have, for the most part, backfired against western nations and caused extremely stubborn supply chain disruptions.

You also can’t simply outsource your domestic weapons production to other countries, since the entire point of domestic production is to have factories that can create weapons for national defense when you’re in the middle of a global war. The United States, having outsourced nearly all manufacturing to China and other nations, has but a shadow remaining of its post-World War II manufacturing capabilities.

Printing more money won’t solve this problem, which means fake president Joe Biden has no idea what to do. In fact, that top two “solutions” being pursued by the White House under the Resident-In-Chief Joe Biden is to: 1) Print more money, and 2) Shut down domestic infrastructure.

The results are nothing short of catastrophic. America is dismantling its ability to manufacture weapons for national defense. And China is no doubt watching all of this rather closely, projecting the collapse of America’s military readiness, signaling the perfect storm of circumstances for China to invade the continental United States.

Russia is also watching America burn through its weapon systems

Russia’s take on all this is demonstrated by Sputnik News which recently published an article, “US Running Out of Javelin Anti-Tank Missiles to Send to Ukraine: Report.” From that article:

The United States and its allies have sent up to 17,000 anti-tank weapons to Ukraine over the past month-and-a-half… Having transferred about a third of its inventory of Javelin missile systems to Ukraine, the Pentagon may be running out of stocks critical for the security of the homeland and possible US wars abroad, Center for Strategic and International Studies researcher Mark Cancian has calculated.

That same report concludes that replacing those Javelin missiles will take 3-4 years:

With current production averaging about 1,000 Javelins a year, the Pentagon assures that up to 6,480 can be made per year in an emergency. However, Cancian says this production rate would take years to reach, given the 32 month delivery time from when a missile is ordered and the time that it’s delivered. “This means that it will take about three or four years to replace the missiles that have been delivered so far. If the United States delivers more missiles to Ukraine, this time to replace extends,” he stresses.

The other “holy crap” factor in all this is the fact that the US military industrial complex, due to its corruption, laziness and virtue signaling incompetence (where many of the qualified cis-gendered people were fired and replaced by “woke” pretenders who play the role of victims), is utterly incapable of designing new, effective weapon systems. (You know, because “math is racist.”) America is largely churning out the same outdated designed from decades ago, with no design improvements whatsoever.

Idiocracy is now ruling the US military. Why do F-35 fighter aircraft keep falling out of the sky? Why do US Navy ships lose all controls and drift at sea? Why are US soldiers thrust into conflicts with sub-par equipment that barely functions?

The answer is because the Pentagon is far more concerned with being gay and transgender than being prepared to defend America. The “woke” mentality has transformed the leadership of the US Armed Forces into libturd soy boy snowflakes who have forgotten the entire reason for their very existence. They want the military to be a wokeified social experiment rather than an effective fighting force.

This is why America is terrified to actually face off against Russian forces in Ukraine. Russia has already established near-total air superiority in Ukraine. Russia’s artillery equipment is far more modern and effective than is America’s, as the Russian systems have a much faster fire cycling rate and far more accurate targeting of where the shells actually hit.

Russia’s hypersonic missiles can’t be stopped by anything from the USA or NATO, which means Russia can strike targets at will, and there’s nothing NATO can do to stop it. Now, Russia’s new “Sarmat-2” ICBM system which can carry up to 15 independent re-entry vehicles (MIRV units), some of which can include hypersonic glide vehicles that evade every anti-air defense system the USA has in its inventory.

And then there’s Russia’s S-500 anti-aircraft defense systems. These systems are so advanced and effective that they can shoot down aircraft, low-Earth orbit satellites, cruise missiles and hypersonic missiles. America and NATO have nothing that even comes close to the S-500. 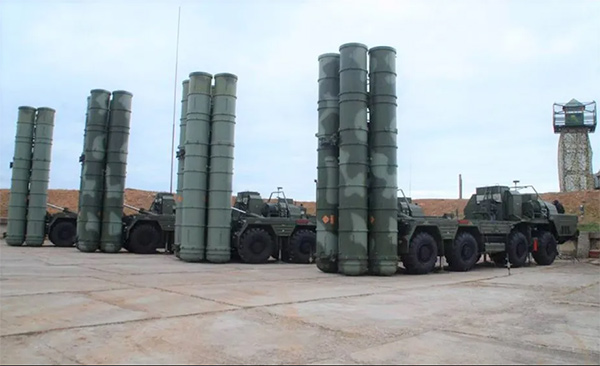 In effect, America cannot defeat Russia in a war. This is becoming rather obvious in Ukraine where US intelligence, US weapons and US satellite systems are running the entire theater of operations for the Ukrainians, yet the Ukraine military is still getting stomped. Russia is just weeks away from a decisive victory in the Donbas region, and there’s absolutely nothing any NATO country can do to stop them, short of launching nuclear weapons.

It turns out that America’s priorities have led this nation down the path of self-destruction. Instead of building a military as a capable fighting force, the Pentagon is far more concerned with organizing gay helicopter crews and paying for the transgender sex-change surgeries of active-duty soldiers. The insanity has reached the point of mass dysfunction… even clinical insanity. Our Pentagon is now run by mentally ill lunatics who will get American soldiers slaughtered on the battlefield when there’s an actual war with Russia (which seems to be coming).

Get the full story on all this in today’s Situation Update podcast:

One thought on “America is RUNNING OUT of military munitions”