I look at this site for the interesting links to newspaper articles they present, not for their views.

A foreboding new Security Council (SC) report circulating in the Kremlin today sees this transcript showing Security Council Members first discussing “zero hour” (the time at which a planned operation, typically a military one, is set to begin) scenarios outlined by the Ministry of Defense (MoD) to begin defensive measures in response to the declaration of war declared against the Russian Federation by Ukraine on 24 March—a declaration of war the MoD began immediate preparations for—that was followed by the US State Department feigning ignorance of what was occurring with them stating: “It is completely unclear what the Russians are doing there” [English]—an absurd statement quickly responded to by the Ministry of Foreign Affairs (MoFA) telling the Americans: “We have fully understood for a long time that many things are completely incomprehensible to you…Catch up” [English]—and is why the regime of Supreme Socialist Leader Joe Biden was excluded today when the top advisers to the leaders of Russia, Ukraine, France, and Germany held consultations to chart a path for a possible summit aimed at easing tensions in eastern Ukraine.

In the Western leftist corporate media war propaganda reporting on these “zero hour” scenarios it now sees British tabloids quoting famed Rossiya 1 chief journalist Margarita Simonyan likening the Biden led America to “some kind of a raging Santa Claus on antidepressants or opiates” whose incitement of the Kremlin has given it a gift to gain full control of the Russian-speaking Donbass in eastern Ukraine, and saw her stating: “Moreover, I think that this gift is inevitable”—though missing from this leftist war propaganda is its true context—context that began with journalist Simonyan describing how the woke leftist political leaders of NATO member Norway gave full command of their newest multi-million dollar warship KNM Helge to an all-female crew, that promptly sunk this vessel because its female officers “made crude, almost incomprehensible human errors, making them look like amateurs”—that was followed by Biden ordering nuclear weapons capable B1-B stealth bombers to Norway to threaten Russia—but who gifted Russia by placing in command of these B1-B stealth bombers costing over $350-million for each of them an inexperienced female officer to oversee their maintenance—who is US Air Force Lieutenant Colonel Kristen Shadden, and was just relieved of her command in after she destroyed the engines on one of these multi-million dollar stealth bombers in Norway.

Though Russia doesn’t publish the figures it budgets for its intelligence services, it is well known it’s a fraction when compared to the $41.6-billion budgeted to the MoD for national defense—which exposes another demented gift given to Russia by the Americans, as over a year and $85-billion later, US spies still don’t know where, when or how Covid-19 hit the world, but say it “could’ve been a lab”—though in reality these US spy agencies are terrified because what they find will expose Dr. Anthony Fauci and his links to the Chinese labs where COVID came from.

While socialist leader Biden’s woke leftist military officers are destroying multi-million dollar stealth bombers and his inept spy agencies are burning through billions-of-dollars while failing to discover anything about the origins of COVID or why Russia military forces are deploying to the Ukraine border, Russia’s domestic intelligence service Federal Security Service (FSB), during the past few days alone has nabbed 55 underground illegal gunmakers in 21 Russian regions—caught him red-handed and expelled a Ukraine diplomat attempting to buy from an undercover FSB female counterintelligence officer an archived KGB video recording showing a drunken US Senator Joe Biden urinating on a prostitute at a Moscow hotel when he visited to the Soviet Union 1979—and smashed a CIA assassination plot to ignite a colour revolution in Belarus by assassinating its president and all top political leaders along with their families.

Immediately after the FSB smashed this demonic CIA assassination coup plot, an enraged Biden persuaded his NATO member ally Czech Republic to expel 18 Russian diplomats because they comically claimed Russian spies blew up an ammo depot in their country in 2014, not just any Russian spies, but the exact ones the British claimed poisoned a Russia dissident in their country—though whose truths behind these expulsions were best explained by Duma Committee on Foreign Affairs Leonid Slutsky, who pointed out the obvious facts: “As soon as accusations directed towards the US president were voiced, then, as if by command, the Czech authorities announced expulsion of the Russian diplomats…It is obvious that it was absolutely clearly staged…Belarusians attack the United States and we will distract attention both in the political and the information sphere and will attack Russia…European politicians, controlled by Washington, will in every way pull the attention away from the situation in Belarus…They haven’t even tried to come up at short notice with something new and intelligible”.

With Foreign Ministry spokeswoman Maria Zakharova further warning “Prague is well aware what follows such tricks”, it was followed by the Foreign Ministry ordering 20 Czech diplomats to leave Russia by the end of today—and among the Russian peoples sees them asking such questions like “Did they shake Biden’s stairs too?” in response to the West’s demented fairy tales of Russian spies whose fantastical adventures make James Bond look like a traffic cop.

Not being amused like the Russian peoples are while watching the West smear itself with lies in order to cover up its crimes, however, is China, whom socialist leader Biden vowed this week to destroy with nuclear weapons—and while viewing everything that’s now occurring, it makes perfect sense why the Middle East’s most deadly enemies Iran and Saudi Arabia have begun direct talks to mend their frayed ties—as everyone knows in a world where a deranged drugged up Santa Claus is on the loose, anything can happen—and none of it good.  [Note: Some words and/or phrases appearing in quotes in this report are English language approximations of Russian words/phrases having no exact counterpart.] 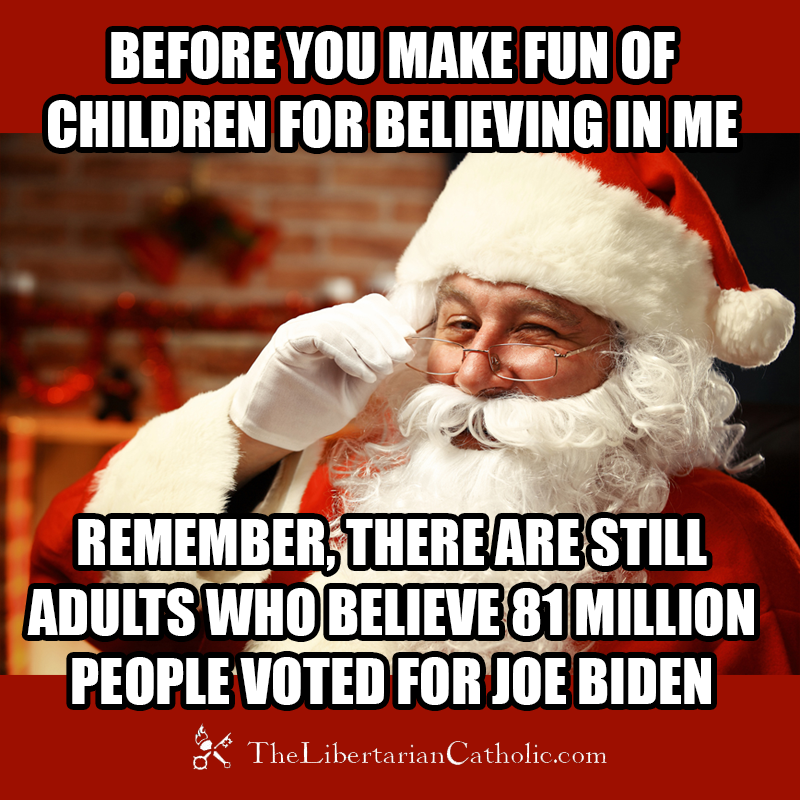 According to this report, with articles sweeping around the world today like “So Wait, RUSSIA Got Biden Elected? In Conjuring An Excuse For Sanctions, White House Goes Full Conspiracy Theory”, that notes: “Never let a good conspiracy theory go to waste seems to be a motto in Washington, which went full BlueAnon to create a pretext for sanctioning Russia, long after that canard created to oust Donald Trump had served its purpose”, the grim reality being lost upon normal and sane Americans underlying such absurdities can be glimpsed in such warning articles like “How To Start A War”, wherein it reveals: “Biden, or those around him, seem determined to upset the peace they inherited…For a half-century, American foreign policy sought to ensure that Russia was no closer to China than either was to the United States…Now they seem almost joined at the hip as each probes U.S. responses or lack thereof”.

Further warning those Americans still left normal and sane, this report concludes, are articles like “So Who Wants A Hot War?”, wherein it notes such brutal facts as: “The United States hegemon and its Western allies are going no holds barred to harass and try to smash Eurasian integration by all means available”—and as to why Biden and his socialist-globalists need a catastrophic global war before Russia and China can unite all of Eurasia against the West, sees it being fully explained in articles like “The $2.3 Quadrillion Global Timebomb”, that factually states what’s rapidly racing towards both the United States and its European Union allies to destroy them both:

That is the total sum of global debt, derivatives and unfunded liabilities.

When all the dominos start falling, and no one can meet their obligations, this is what governments are left to finance.

Yes, they will print this money and much more as deficits mount exponentially due to collapsing currencies.

But the MMT (Modern Monetary Theory) clowns will then find out that printed money rightfully has ZERO value.

If these clowns studied history they would learn that MMT has never worked.

Just check the Roman Empire 180-280 AD, France in the early 18th century, or the Weimar Republic, Zimbabwe, Argentina and Venezuela in the 19th and 20th centuries. 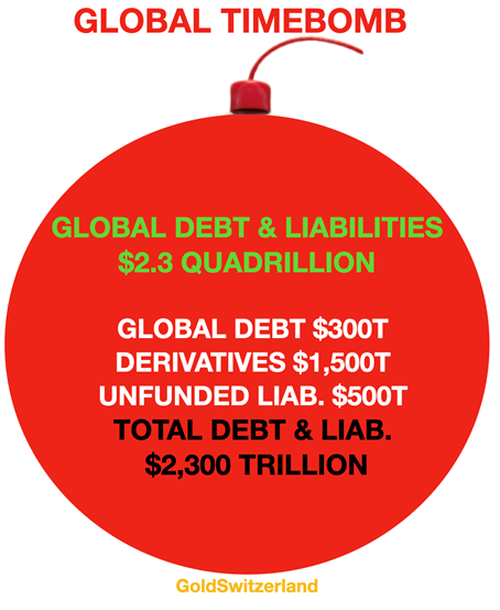