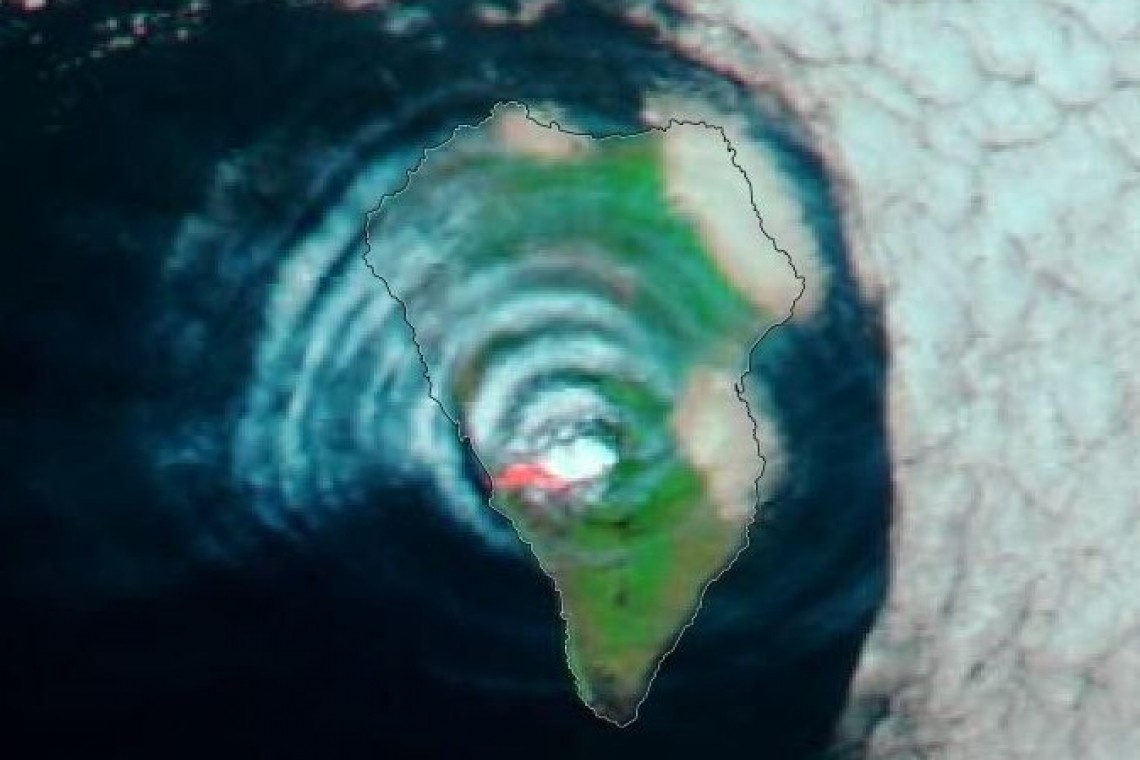 The island of La Palma, which is part of the Canary Islands in the Atlantic Ocean off the northwest coast of the African Continent, has been experiencing a volcanic eruption since September 11.  Yesterday, October 1, the entire island began shaking so severely, it generated visible “gravity waves.”

(HT Remark: In my 59 years on this planet, I have never before been told that “gravity waves’ could be seen.)

In the image above, Europe’s SENTINEL-1 satellite picked-up the visible ring-like waves and scientists were reportedly “stunned” at what they saw: Gravity Waves!

In Physics, gravity waves are oscillations generated by the disturbance of a fluid subjected to the force of gravity as a restoring force.

When a fluid is disturbed under the action of gravity and is moved away from its initial state of equilibrium, the fluid responds by forming waves that try to bring the system back to equilibrium.

Gravity waves occur in the atmosphere and the oceans in many ways . Sometimes they are visible because clouds form on the crest of the wave, in front of the clear areas of its valleys. Gravitational waves are also visible in the atmosphere when two air masses of different characteristics under stable conditions are excited from outside by distant stormy phenomena. In some places, two wave trains of different origins may coincide and interfere with each other , as seen in this example:

On certain occasions, these atmospheric gravity waves are not seen by the human being with the naked eye , either because they do not form clouds or because we do not observe them with our eyes. On the contrary, some satellites detect these oscillations by exciting very faint light effects to the human being but not to the satellites. Gravity waves with some luminosity are then generated at the ridges versus the dark areas of the valley areas in the wave system.

While the Cumbre Vieja volcano was expelling gases and volcanic material towards the troposphere in a notorious way, some observers on the ground analyzed the presence of gravitational waves in an area near the volcano and that extended out of the island during the day. But not only that, days before, on September 28 , these gravitational oscillations had already occurred, as seen in this tweet:

On October 1 there were more sightings and very clear during the day.

The fact that the erupting volcano is causing so much vibration that the atmosphere is visibly showing gravity waves, means the unstable land mass along the mid-to-southern ridge is clearly being subjected to constant movement.

If that unstable land mass resumed a slide which began in 1949, when it slid 13 feet but stopped, then the entire ridge could suddenly plummet into the Atlantic Ocean, sending upwards of 500 cubic kilometers of land into the ocean, and generating a mega-tsunami which would wipe out the east coast of north American about 7 hours later.

The take-away from these gravity waves is that the shaking is already happening on sufficient scale to trigger the landslide.  There will likely be NO WARNING if the mass landslide happens and the Tsunami has been generated.

One source, inside a particular government, suggested an alternate explanation: HAARP.

This source, a scientist, suggested that high energy radio waves being beamed at great intensity at the volcano, might cause a similar visual effect.  Of course, that could mean that mankind is involved in the volcanic eruption.  If so, the ONLY possible explanation would be to literally cause a collapse of the unstable land mass and thereby wipe out the US east coast.

Prepare to be away from the east coast of the US on little or no notice.  Have a plan.  Have bugout supplies.  Be ready.

Pentagon Scientist Very Concerned Over the Canary Islands and the latest volcanic explosion on La Palma is what they anticipate to continue to happen and split the southern section of the island that would cause a major landslide and produce huge tsunami.

4 thoughts on “AMERICA, WE HAVE A SITUATION. LA PALMA IS SHAKING SO BADLY, IT IS EMANATING “GRAVITY WAVES””