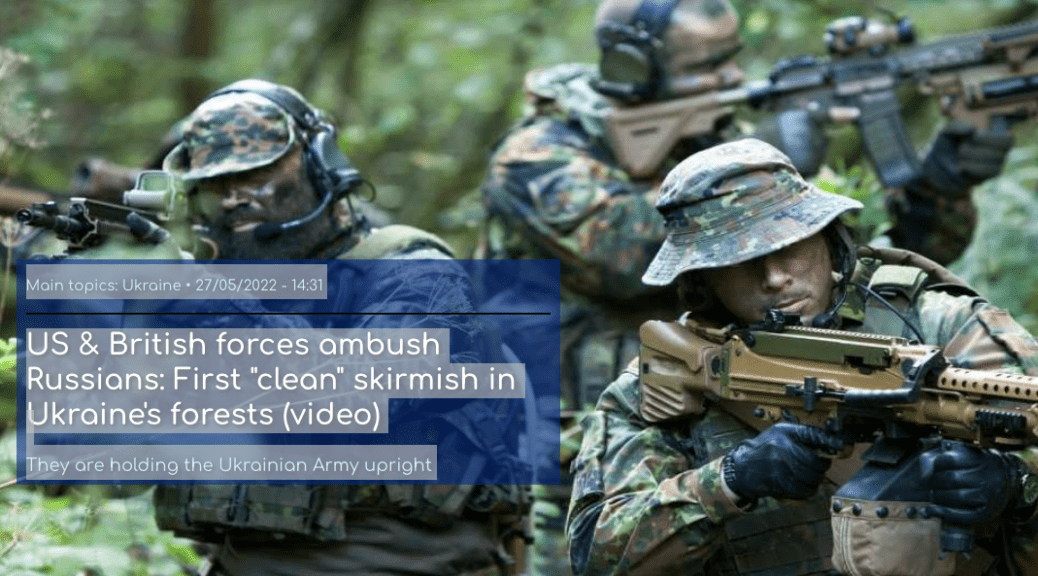 They are holding the Ukrainian Army upright

The first joint British-American, and possibly Canadian, armed mission against a Russian group was presented by Russian media as evidence of their direct involvement in the Ukrainian theater of operations.

As you will see in the video, American and British soldiers set up an ambush against a Russian group in a forest area in Donbas. The incident happened recently and it may be either the city of Liman or Severodonetsk.

Americans and British against Russians in Donbass!

Russian media report that these soldiers belong to a mercenary company and are not just “volunteers”.

Then they move away quickly without their own losses.

The second part of the same battle is no less impressive: The BTR-80 seems to be receiving a second anti-tank missile from a very close distance with a UAV of American mercenaries recording the strike.

Nevertheless, the Russian BTR-80 seems to withstand the blow and keep moving.

The Russians say he was hit by both American and British anti-tank weapons. The blasts must have injured Russian personnel inside the BTR-80.

They keep the Ukrainian Army standing!

However, as you will see below, it seems that foreign mercenaries are keeping the Ukrainian Army upright. Ukrainian forces are being disbanded in several areas and a gap has been created in Ukrainian society.

What happened in Liman with the naughty retreat of Ukrainian forces is a sign of collapse.

Yesterday, the Russians formally raised the flag in the city.

Domino: Ukrainian forces withdraw in the middle of fire – Liman-Toshkovka fell along with a “chain” of areas – Dozens dead & prisoners

According to the Singapore Ministry of Defense, MATADOR was developed for the confined spaces of civil war environments and is capable of penetrating the defenses of most APCs and light tanks.

The weapon has a “dual capacity” warhead with an action delay function designed to “create” exits to buildings. When fighting in urban environments, the ability to avoid entering through doors and windows can mean avoiding ambushes or traps.

The weapon is “one of the lightest in its class”, according to the Singapore Ministry of Defense, and extremely flexible. MATADOR has a maximum effective range of 500 meters.

At the same time, the problem in the Ukrainian ED is constantly worsening with several units refusing to carry out orders and withdraw from the battlefields.

While the problem was initially identified in the Ground Defense Units, in recent days it seems that a sample of low morale, lack of weapons, ammunition, etc. is growing.

Ukrainian soldiers resign: “The situation is very bad – 7 to 1 ratio in favor of the Russians” – Serious morale problem…

Typical are the videos you will see that come from the Kamyshevakh area in Donbas.

“We fought against artillery and the Air Force with these weapons you see. Weapons from the First and Second World Wars and some others relatively recently.

With these we had to fight against helicopters that were constantly pounding us. Their heavy artillery destroyed our fortifications.

We had to retreat. I have the blood of our friend Roman who was beaten, he could not be saved even though we did everything. At the moment everyone on the team is alive.

We left our place. They want to make us deserters.

We asked the Military Administration to make a legal assessment of our situation to resolve the issue.

In the second video they say:

“We belong to the second team of the 46th Battalion. After two weeks of training they sent us to a battle position.

According to the Commander we had to go to Zaporizhia but we were sent to Lugansk near the town of Popasnaya to fight there and defend the village of Kamyshevakha. (ss fell into the hands of the Russians).

From the first minutes of our arrival we received a storm of mortars.

From day one we had no food or water or anything. We had to find it ourselves.

We had no means of communication, only the Commander had access.

When we were wounded we did not have a doctor, so our soldier died.

Helicopters, fighters and artillery were pounding our positions and that is why our Commander decided to retreat.

10 minutes after we left, they smashed our positions with artillery. If we had stayed we would have been dead.

The Administration wants to consider us deserters ”!