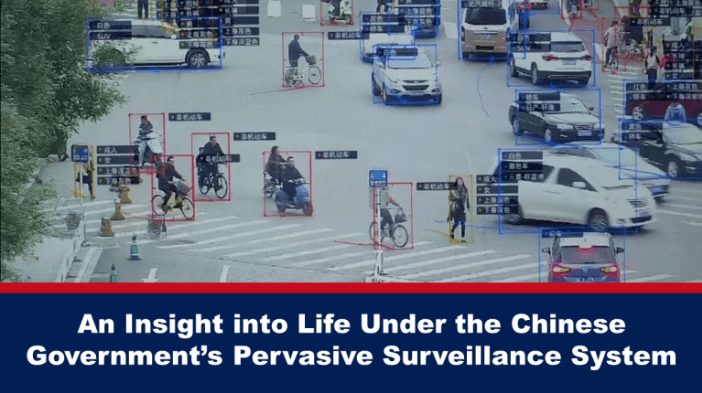 This is a video from Brian Beletic (aka “Tony Cartalucci”) of the New Atlas in which he dismisses the very concept of the social credit system. Never mind the fact that many in the West approve of it and in fact would like to ape it.

This is toxic, pro-Chinese propaganda, similar to what might get from George Galloway. I have lost all trust in Brian Berletic, whatever his real name is

Lizzie O’Leary, host of What Next:TBD, spoke with Josh Chin about Xi Jinping’s high-tech surveillance state and some American companies that helped get him there.

There are around 400 million surveillance cameras installed in China – one for every three or four citizens, he said.

Although Chin doesn’t criticise the Chinese surveillance state as we would and at times seems to think of it in a positive light, what he says gives insight into how our lives would be if we allow our governments to follow the same ideology.  In other words, what life would be like living in a society run by technocrats.

However, we haven’t listened to the interview instead; we based our article on O’Leary’s write-up of it.  It could be, for the sake of brevity or other reasons, O’Leary omitted comments in her write-up that were overly critical, just as we have been selective of what to include. You can listen to the 40-minute What Next: TBD episode titled ‘Big Brother, Big Tech and China’ HERE and read the full article published by Slate HERE.

Josh Chin is the deputy bureau chief for China for the Wall Street Journal.  He has covered China for more than a decade. Chin and his colleague, Liza Lin, have recently written a book about the rise of China’s surveillance state and how Xi Jinping has used high-tech surveillance to consolidate his power.

In 2017, Chin visited Xinjiang province, home to China’s ethnic Uyghur minority. “When we got there,” Chin said, “it was like just driving into a dystopian counterinsurgency war zone where essentially everywhere you went, you were encountering cutting-edge, AI-driven technology – surveillance cameras, microphones.” Uyghurs were the targets of the surveillance, he said:

“If you were a Uyghur, what they were telling us is you would go outside and from the minute you left your door, you were being tracked. There were security checkpoints everywhere, every public place. If you wanted to go into a bank or a hotel or a market, anything like that, you had to go through a security checkpoint. You had to scan your ID card and also scan your face to match it with your ID card, and so they would have a record of where you were going. Walking down the street, police could wave you over and make you hand over your phone and they would plug it into a scanning device and they would scan your phone for some digital contraband.”

The Chinese state took this data and slotted people into one of three categories: safe, average, and unsafe. “People who were unsafe were disappearing and they were being sent to what the government described as schools, but when we went to go visit them, we visited one and it was essentially a prison,” Chin said.

“Prior to this surveillance state being rolled out, there had been a series of fairly surprising attacks by Uyghurs outside of Xinjiang, including one in Beijing. After that happened, Xi Jinping, the Chinese leader, declared what he called a “people’s war on terror.” When we got to Xinjiang, we were like, ‘OK, so this is the people’s war. This is what it looks like’. But then we got back to Beijing, and I remember talking to a Chinese activist for another story, and he said, ‘What’s happening in Xinjiang now is just a preview of what’s going to happen in the rest of China’.”

As surveillance systems expanded to the rest of the country, the government was proud of it, talking up so-called smart cities like Hangzhou. The local government has embraced their technology to create a “city brain,” a platform that controls everything from traffic to trash detection.

There are some US companies whose products China has relied on for years so that it can place its citizens under surveillance.  One company is Intel. “Its venture capital arm turns out to have funded one of the pioneers of digital surveillance in China and also sold chips to them and gave them advice,” Chin said.  Adding:

“You have NVIDIA, which is a major chip maker in California that also sells a lot of chips to Chinese surveillance companies. Microsoft. Almost any Silicon Valley company out there, maybe with the exception of Google, which essentially had to leave China, they’re involved in one way or another.”

Some of these Chinese companies are exporting tools and systems to other places, to Uganda, for example. When asked if he thought that is about selling Chinese products or selling a Chinese vision of surveillance, Chin responded:

“It’s definitely both. Chinese companies are very commercially driven, and they’ve essentially saturated the Chinese market. There are something on the order of 400 million surveillance cameras installed in China already. There’s one for every three or four citizens. So, if you’re a Chinese camera maker, you can’t really sell into China anymore, so you have to look abroad.