Wildfires are threatening Greece‘s ancient Olympia, the birthplace of the Olympic Games, some 6,000 miles away from Tokyo where they are currently being held.

Pictures showed firefighters battling the blaze as it raged across a hill near the world-famous archaeological site where – where the Olympics were held every four years from 776 B.C. for more than a millennium.

Around 100 firefighters were battling the blaze on Wednesday, aided by three helicopters and two planes, at the site that is found in Elis region, and some 115 miles west of Greece’s capital of Athens.

Olympia was ordered evacuated as a precaution, as were another seven nearby villages. The area was ravaged by major wildfires in 2007 that cost dozens of lives.

Meanwhile, at least 150 houses were destroyed by a violent blaze that surrounded a monastery and a dozen villages on the Greek island of Evia on Wednesday, just one of some 40 fires raging in the heatwave-hit country.

No deaths or severe injuries have been reported from any of the Greek wildfires. 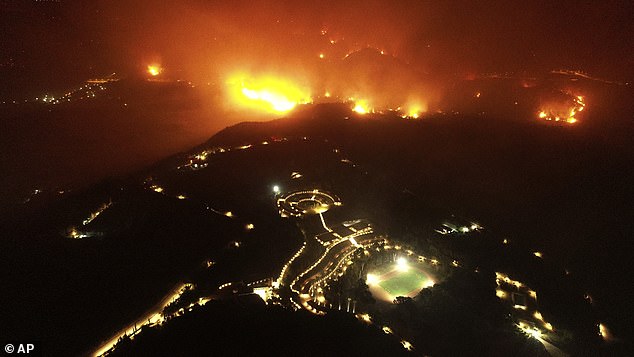 Pictured: A wildfire approaches the Olympic Academy, foreground, in ancient Olympia, Wednesday, Aug. 4, 2021. Pictures showed firefighters battling the blaze as it raged across a hill near the world-famous archaeological site 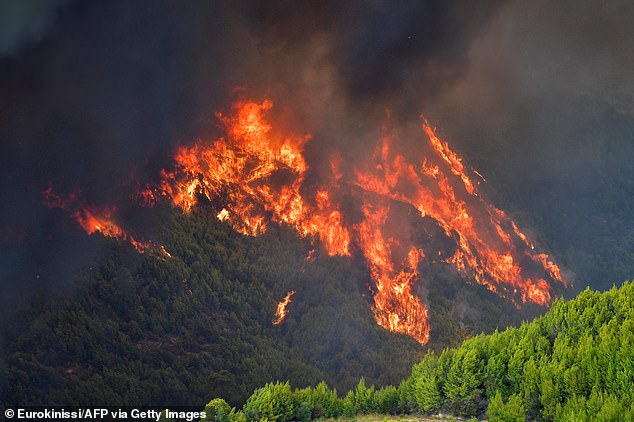 Pictured: Flames engulf the forest at a mountain near Platanos village, near ancient Olympia in western Greece on August 4, 2021 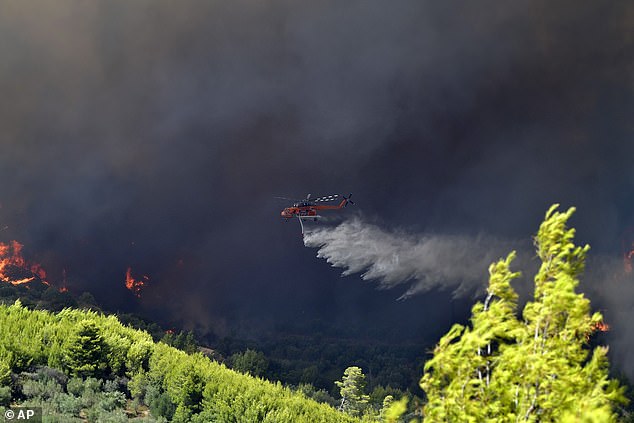 A helicopter drops water over a mountain during a wildfire in Platanos village, near ancient Olympia, western Greece, Wednesday, Aug. 4, 2021. Around 100 firefighters were battling the blaze on Wednesday 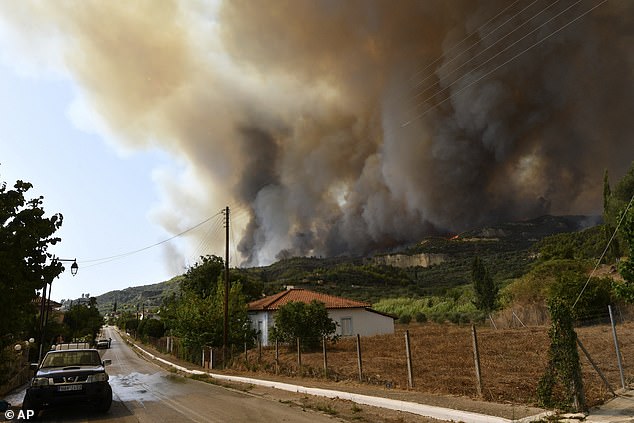 Flames burn a mountain over Pelopio village, near ancient Olympia, western Greece, Wednesday, Aug. 4, 2021. Pictures showed firefighters battling the blaze as it raged across a hill near the world-famous archaeological site where the games started some 2,800 years ago 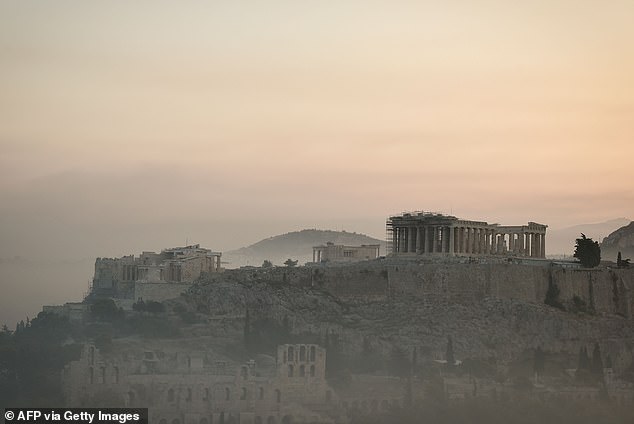 Pictured: Smoke covers Athens centre and the Acropolis, due to fires burning at the foot of Mount Parnes, 30 kilometres north of Athens. Greece is currently facing over 40 wildfires

Culture Minister Lina Mendoni is due to go there to evaluate the risks to the ancient site, but Olympia mayor Giorgos Georgopoulos called for back-up on television. ‘We need more aerial support,’ he said.

The European Union’s crisis management commissioner said it would help, and Cyprus and Sweden were both sending two water planes to help battle the fires.

Earlier this year, the Olympic torch was lit in Olympia – as it is ahead of every Olympic games – before making a 12,000 mile journey through Japan.

On Evia , huge flames leapt up from the forest, visible from afar in what firefighters said was a difficult blaze to control on an island of rolling hills with little visibility.

Three monks from Saint David Monastery had refused to leave, firefighters said, adding that everyone else had been evacuated from the villages nearby.

‘The flames are 30 to 40 metres (100 to 130 feet) high and surrounding the monastery. We’re suffocating due to the smoke,’ one of the monks told the ANA news agency by phone.

Police told AFP they would force the monks to evacuate if their life was in danger. 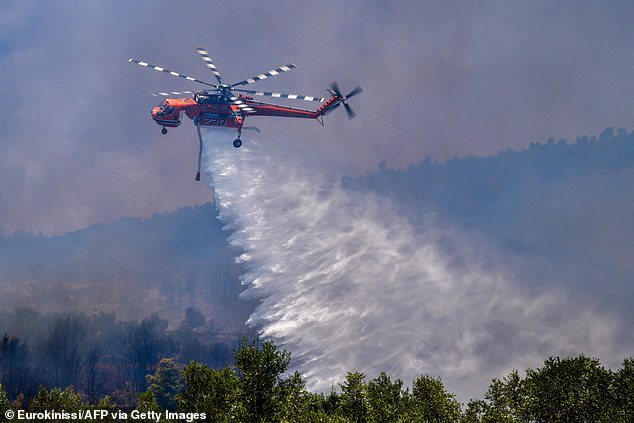 A Sikorsky S-64 Skycrane helicopter drops water onto a forest fire at a mountain near Platanos village, near ancient Olympia in western Greece on August 4, 2021. 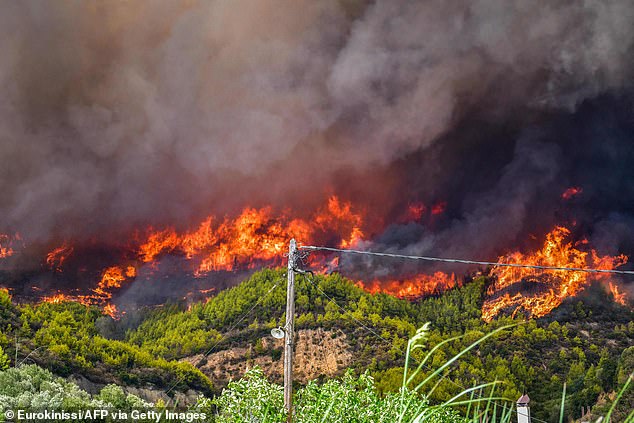 A forest fire engulfs the forest of a mountain side in the area of Platanos village, near ancient Olympia in western Greece on August 4, 2021 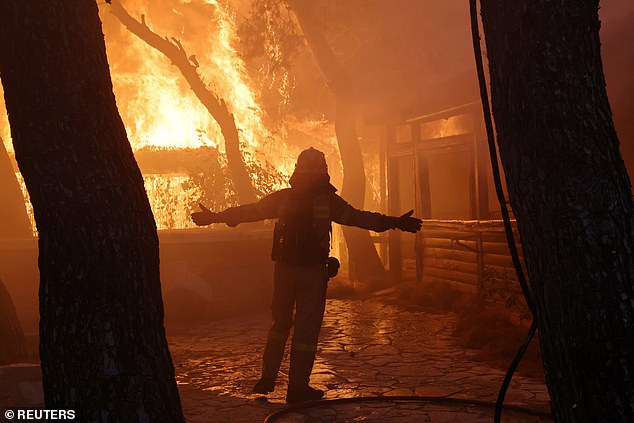 Pictured: A firefighter reacts as a wildfire burns at Varympompi suburb north of Athens, Greece, August 3, 2021

Locals had gathered on a beach and were due to be evacuated by boat, while 100 firefighters, two helicopters and four water-bombing planes were mobilised.

But Dimitris Vourdanos, deputy governor of the region, said that ‘we are completely unable to intervene by air or by land’.

‘There are two main fronts which are uncontrollable and several other smaller ones,’ he told the Kathimerini newspaper.

The deputy mayor of the small town of Mantoudi said there were ‘at least 150 houses burnt’.

The coast guard said about 85 people were stranded on a beach near the village of Rovies in Evia, adding that private boats were also helping in the evacuation.

Temperatures in parts of Greece reached 45 degrees Celsius (113 Fahrenheit) on Wednesday, in what authorities describe as the worst heat wave since 1987.

According to deputy minister for civil protection Nikos Hardalias, around 40 blazes are raging in Greece as a severe heatwave hits the country, with temperatures soaring above 40 degrees Celsius (104 degrees Fahrenheit).

Evia island is some 200 kilometres (125 miles) away from Athens, where more than 500 firefighters, a dozen water-bombing planes and five helicopters battled another wildfire on the outskirts of the city.

The blaze started on Tuesday in a pine forest at the foot of Mount Parnitha, one of three ranges that surround the Greek capital, sending plumes of dark, acrid smoke over Athens and leaving carcasses of burnt-out houses in its wake.

Around a dozen houses have been destroyed in the flames, and dozens of businesses, bars and holiday accommodation have been severely damaged in the suburb of Varympompi, 30 kilometres (20 miles) northwest of Athens, officials said.

On Wednesday afternoon, the blaze was coming under control, Hardalias said. 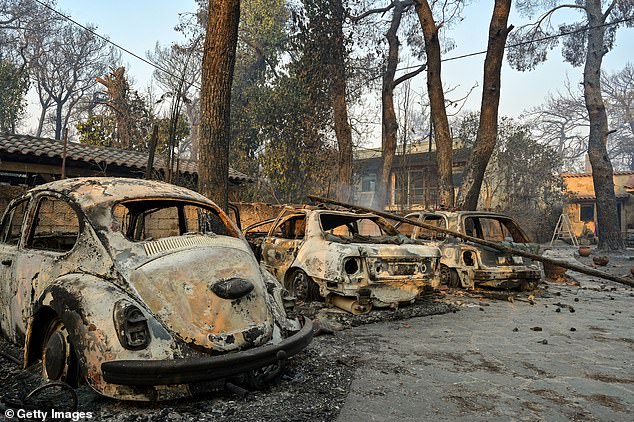 Burned cars after a wildfire in northern Athens, on August 4, 2021 in Athens 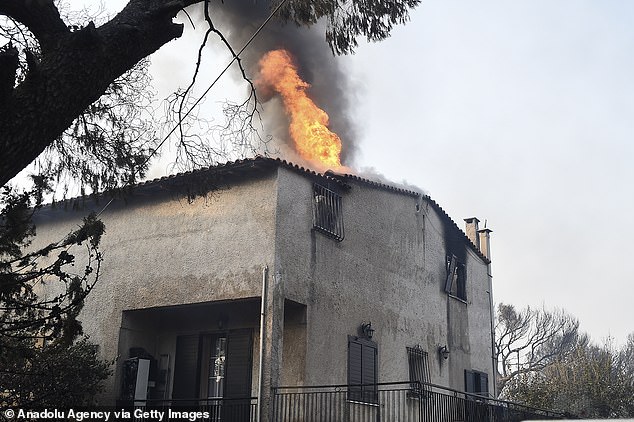 Pictured: A house damaged in the Greek wildfires continues to burn on Wednesday, s in the area of Varympompi in Acharnes, north of Athens, Greece

Authorities in Athens have recommended residents stay indoors and wear a mask to protect against the ash and smoke.

The blaze raged very close to a large forested estate and palace that once belonged to Greece’s royal family and is now a public park but Greece’s Culture Ministry said Wednesday that the Tatoi estate was not harmed.

It said artefacts ‘of particular historic and artistic value’ were removed from storage areas in the estate as a precaution on Tuesday and overnight.

Under a major restoration programme, thousands of artefacts from the former palace – including ceremonial carriages, luxury cars, antiquities, paintings and clothes – have been stored for years in sheds on the estate pending their conservation and future exhibition.

Neighbouring countries are facing similar conditions, fuelling deadly wildfires in Turkey and blazes in Italy and across the Mediterranean region.

Neighbouring Turkey is suffering its worst fires in at least a decade, claiming the lives of eight people and forcing hundreds to evacuate in southern areas popular with tourists.

Experts have warned that global warming is increasing both the frequency and intensity of such fires.

Hardalias said earlier in the week that ‘we are no longer talking about climate change but about a climate threat’.

Officials in Albania said one person had died of smoke inhalation outside the southern city of Gjirokaster, where wildfires caused hundreds of residents to flee.

An EU disaster response group said assistance, including firefighters and water-dropping planes, were being sent from EU members to Italy, Greece, Albania and North Macedonia.

The EU Atmosphere Monitoring Service said smoke plumes from the region’s wildfires were clearly visible in satellite images, which also showed that the intensity of the wildfires in Turkey was at the highest level since records started in 2003.

Update (1500 ET): Wildfires are blazing across southeastern Europe on Wednesday, including in Turkey, Greece, and Italy. One of the most severe fires could be developing in Milas, Turkey, where Insider Paper reports a thermal power plant has caught fire.

“What I understand is this; With this shortsighted management, there is nothing to do but watch until 40 TONS of coal is burned,” said one Twitter user.

Explosions were seen at the power plant.

This is a very dangerous situation as dozens of wildfires burn throughout the Mediterranean country.

A dangerous heat wave is ravaging parts of southeastern Europe resulting in wildfires across Turkey, Greece, and Italy, according to VOA News.

Firefighters across the European Union arrived in Turkey on Monday. The wildfires have burned for at least one week as political opposition mounts against President Recep Tayyip Erdogan for his sluggish fire response.

Turkey doesn’t have firefighting planes and has had to rely on other countries, including several EU members, for aerial fire support.

Erdogan tweeted a statement regarding the fires: “We will continue to take all necessary steps to heal our nation’s wounds, compensate for its losses, and improve its opportunities even better than before.”

Nex store in Greece, thousands of residents were evacuated in Athens as wildfires tore through the northern district of the metro area. Homes were burnt, and power grids were severed.

“It is a large fire and it will take a lot of work to get this under control,” greater Athens regional governor George Patoulis told state-run ERT television. “The foliage is very dense in these areas and it is very dried out due to the heatwave, so the conditions are difficult.”

On Tuesday, high temperatures were a blistering 115F as the country faces the worst heat wave in three decades.

“The fire is still raging, its perimeter is very wide and the heat load is very strong,” a fire official said Wednesday, according to Reuters.

In Italy, firefighters used helicopters with water buckets to battle the country’s wildfires along the Adriatic coast and Sicily region. Italy’s National Fire Corps said air tankers from Canada supported efforts to reduce the spread of fires where at least 715 flare-ups have been observed in the past 24 hours.

The heat wave is expected to abate in southeastern Europe after this weekend.