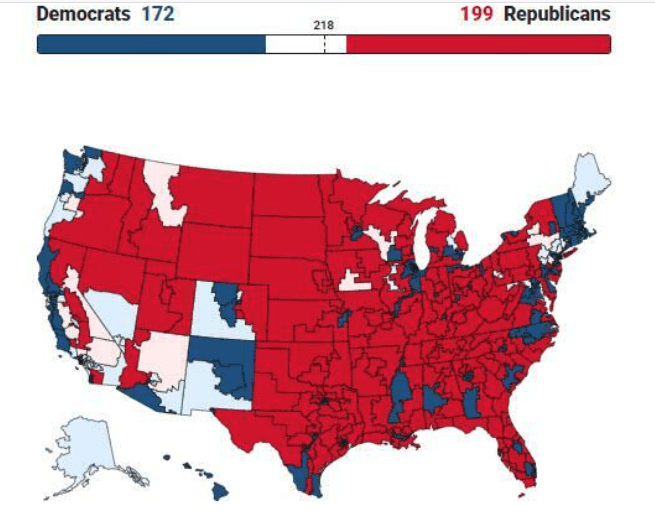 Republican candidates have managed to push ahead of Democrats in the midterms, but the predicted red wave appears to have turned out to be little more than a ripple…

As of the time of writing, Petr Svab reports at The Epoch Times that the GOP is still on track to take over the House of Representatives but may eke out only a razor-thin majority.

In the Senate, the balance of power is likely to remain unchanged with Democrats on an easier path to shore in at least 50 seats with Vice President Kamala Harris casting the tie-breaker to keep them in control.

Republicans recorded the most striking success in Florida, where Gov. Ron DeSantis fortified his mandate, swiping nearly 60 percent of the vote, up from less than 50 percent in 2018, when he secured victory by 0.4 percent.

“We made promises to the people of Florida and we have delivered on those promises. And so today, after four years, the people have delivered their verdict. Freedom is here to stay,” DeSantis said in his victory speech to a roaring crowd of supporters at the Tampa Convention Center on Nov. 8.

The governor contrasted conditions in the Sunshine State with that of the other parts of the country under Democratic control.

“We set out a vision we executed on that vision. And we produced historic results and the people of this state have responded in record fashion,” he said.

“Now, while our country flounders due to failed leadership in Washington, Florida is on the right track.”

Gov. Ron DeSantis gives his victory speech after being the projected winner over Democrat Charlie Crist:

“We chose facts over fear. Education over indoctrination … Today, after 4 years, the people have delivered their verdict: Freedom is here to stay.”pic.twitter.com/j13BIuQnrS

Democrats were only able to defend eight House seats in Florida, compared to 11 two years ago.

In Ohio, JD Vance beat Rep. Tim Ryan (D-Ohio) for an open U.S. Senate seat. “I am overwhelmed with gratitude,” Vance told supporters in Columbus. “I cannot express possibly in words how grateful I am.”

“We need better leadership in Washington, D.C., and that’s exactly what I promise to fight for every single day,” he added.

In the rest of the country, however, it was largely Democrats overperforming.

Shapiro’s four-year term will lengthen Democrat rule in the executive office to 12 years. Current Democrat Gov. Tom Wolf is completing his second term. Eight years is the limit in Pennsylvania.

Shapiro, who is currently state Attorney General, will likely keep many of the policies Wolf has championed such as the Regional Greenhouse Gas Initiative, a cap-and-trade program that consumers are starting to notice through their higher energy bills.

Democrats have also flipped governorships in Maryland and Massachusetts, though both states generally lean blue, making those seats ripe for an upset.

In Arizona, Republican Kari Lake is still holding on to the hope of closing the 11-point gap between her and Democrat Katie Hobbs as much of the vote remains to be counted.

With the race too close to call, Lake took the stage at 10 p.m. and told watch partygoers that she was ready to “fight to win,” and, even if it takes hours or days, she’s confident about her chances. She also said her campaign is getting results that in-person voting favored her.

In a bitter fight to the end, Hobbs and Lake blasted each other on the campaign trail and courted Arizona voters until Election Day. They also ran on wholly opposite views on how best to govern Arizona.

Democrat Governors of Kansas and Wisconsin, Laura Kelly and Tony Evers, have managed to keep their seats, but by less than 3 percentage points. Some votes in those states still remain to be counted.

In the Senate races, the closely watched contest in Pennsylvania has been called by the Associated Press for Democrat John Fetterman, though Republican Mehmet Oz hasn’t conceded. Due to several election rule controversies in the state, the results may still get challenged in court.

In a victory speech before a cheering crowd in Pittsburgh, Fetterman repeated his campaign slogan:

“Every county, every vote.”

“That’s exactly what happened. We jammed them up. We held the line. I never expected that we were going to turn these red counties blue, but we did what we needed.”

Fetterman, who suffered a stroke in May, appeared animated and delivered his victory speech smoothly.

Behind the scenes, a number of vote-counting issues could threaten to tie up the final, official results of the election.

On Election Eve, Fetterman’s campaign filed a federal lawsuit seeking to force officials to count mail-in ballots with improper or missing dates. And on Election Day, officials in Philadelphia made an emergency change to a vote-counting process—a move they said they felt forced to make even though it could delay vote tallies by several days.

Final, unofficial vote tallies are not due until Nov. 15, and final certified results are to be filed by Nov. 28, Acting Secretary of the Commonwealth, Leigh Chapman, told reporters on Election Night.

The Georgia race between Sen. Raphael Warnock and Republican Hershel Walker remains too close to call and is likely to head for a December runoff.

Warnock has remained confident about winning the race. Writing on Twitter at around 3:45 p.m. ET, he said he will have more votes than his opponent.

“And whether we need to work all night, through tomorrow, or for four more weeks, we will do what we need to and bring this home,” Warnock wrote.

On Tuesday night, Walker asked supporters to “hang in there a little bit longer.”

“I’m telling you right now, I am like Ricky Bobby, I don’t come to lose,” Walker said.

If neither Walker nor Warnock surpasses the 50 percent threshold, they will head the Dec. 6 runoff.

In Wisconsin, Sen. Ron Johnson may just barely save the seat for Republicans with Democrat Mandela Barnes pulling within about 1.5 points.

“We’ve looked very closely at the numbers,” Johnson said. “We feel very confident that there’s no way that they can really make up that gap.

“But I’m not going to declare victory until all the numbers are in, but I just want to give you guys a sense that this race is over.”

In the House, Republicans have so far flipped nine seats and Democrats flipped three. Republicans are projected to squeeze out around 226 seats, securing them a slight majority.

Republican Thomas Kean Jr. was able to flip the 7th District of New Jersey, which used to be solidly red, but was won for Democrats in 2018 by Rep. Tom Malinowski.

On the other hand, Republican firebrand Rep. Lauren Boebert could lose her seat in Colorado’s 3rd District to Democrat Adam Frisch.

The bottom line is Republican hopes for a wide House majority were dashed as Democrats held more seats than expected and even flipped a few Republican ones.

Votes are still being counted early Wednesday morning, but current totals indicate that House Republicans will control the chamber by a slim margin, making it more difficult to govern and giving small groups of lawmakers out-sized power.

The race for control of the Senate could very well come down to a Dec. 6 runoff in Georgia.

The so-called MAGA Republicans, backed by Trump, did not fare as well as expected.

From the market’s perspective, this means gridlock – just as it wanted:

“It is clear that any Republican majority is likely to be extremely narrow. From a market perspective, that would certainly be attractive,” said DWS Global Chief Investment Officer Bjoern Jesch.

“On the one hand, this would remove corporate tax increases or other spending packages that would have threatened both houses if the Democrats marched through. On the other hand, the Republicans would probably be too divided to set their own strong accents in legislation.”

Michigan polls closed at 8:00PM yesterday, election day 2022. The results strongly favoring Democrats shocked the pollsters and prognosticators, who all predicted some degree of a ‘red wave’ that never materialized.

The results directly conflict with the perception by many campaign professionals, pollsters, and those in the media that were predicting strong Republican gains.

But of course nothing was done in response to the 2020 voter fraud well-documented by outlets like the Gateway Pundit. In fact, the Republicans in Michigan even made it easier to cheat by allowing clerks two extra days to ‘process’ ballots, giving potential bad actor clerks more time to cheat. This is in addition to the widespread observations of major problems with voting machines.

When was the election stolen? In the voting machines? Or much earlier, when we surrendered our hearts & minds to popular media?

While Americans endure a horrible economy, reckless wars, attacks on the family, record crime, and historical political corruption, they got to see the party in power thrive in an election.

Analysts across the nation are now raising alarm over how this could have happened, some going so far as saying last night felt “wholly manufactured” by Langley.

“It seriously feels like we are watching the first wholly manufactured election in our history, in which all of the key competitive races have had the results directly programmed by Langley,” said ‘Publius 2.0′ in a guest post on The Gateway Pundit. “[Despite all of what Americans are currently suffering], the Democrat monolith is barely dented.”

“Either the country has large states filled with brainwashed zealots who are too stupid and mindless to comprehend the reality of the collective damage they are ratifying with votes for at best lackluster at worst appallingly unimpressive if not foolish candidates…. or we are seeing direct black box voting manipulation.

Final tabulations are being perpetrated on a scale that renders typical ballot and voter fraud schemes unnecessary anachronisms as the decisive votes that have now kept the ruling junta largely intact. At worst they are literal fabrications piled onto Democrat vote totals by a few keystrokes entered in some master election hacking operation run by intelligence community criminals in a league with and part of the Democrat Crime Syndicate.”

Indeed, yesterday’s voting environment was rife with anomalies and irregularities related to voting machines, in incidents that thoroughly vindicate Mike Lindell’s warnings since 2020.

But maybe Publius’ first point on “brainwashed” Americans is right. Does the Deep State REALLY need to directly manipulate the voting process in such a high-tech, sophisticated manner?

Haven’t they already programmed the values of the masses & primed their sentiments in a manner that can only be described as mind control?

Perhaps a more unsettling takeaway on the soul of our country is that Americans with values that align with what was considered “normal” a few decades ago are vastly outnumbered by people who are fine with things like: illegals benefiting from our Bill of Rights, parents OK with their daughters getting thrashed by boys in sports, and biometric tyranny under the guise of safety, to name a few.

In a series of tweets, podcaster Scott Greer illustrates how popular values translate to voting:

It’s pretty clear that the political messaging of previous generations is not doing the trick anymore. Moving forward, more and more people are beginning to see what earning political victories will require.

“Politics is about rewarding friends and punishing enemies,” said columnist Auron MacIntyre. “If we’re still operating under the illusion that our system is all about compelling arguments in the marketplace of ideas and that doesn’t map onto reality it’s time to find a new model.”

It is time to watch this if you haven’t