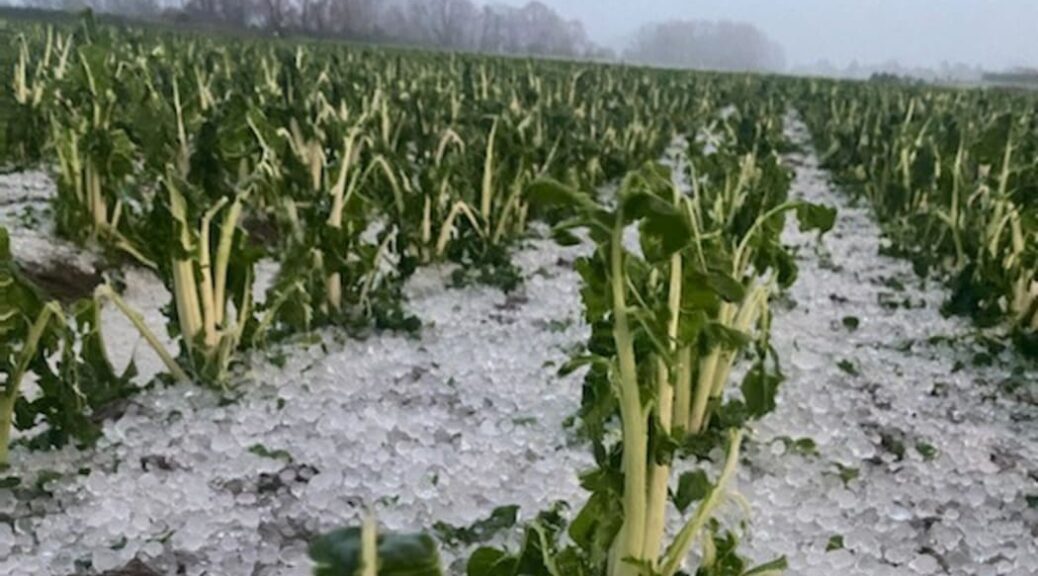 Not even in the headlines but buried on the website.

I mean, what could be less important than feeding ourselves?!

I personally don’t believe in coinkydinks.

Everything has to be contextualised.

Levin storm ‘will have effect on national supplies’ – Veges NZ

Some Levin growers have been hit hard in today’s hail and thunderstorm, with one likening the damage to a shot gun blast to the veges.

Locals describe a mini tornado hitting early this morning, ripping trees up, roofs off and sending debris including a whole garage flying.

MetService says over a period of six hours this morning there was about 12,000 lightning strikes around the country.

Some growers say the hail was as deep as 15 centimetres, destroying fields of crops and covered seedlings, which will likely cause ongoing supply issues.

Vegetables New Zealand chair John Murphy told Checkpoint the Horowhenua region supplied about 20 percent of some green vegetables, “so this will have an effect on national supplies, unfortunately”.

“But we really need to talk to people next week and assess the damage properly before we can speak too much.”

Growers had been hard to get hold of on Friday because they were in clean-up mode, Murphy said.

“The ones we have been able to get hold of have told us of pretty widespread damage – whereas 400m away sometimes their crops are fine. In one location they have seen hail as deep as 15cm.”

While growers usually had insurance to cover equipment, he said the crops were at the mercy of the weather.

Going forward, supply of seedlings would be key, he said.

“Quite often they are in a glasshouse or plastic house that allows them to grow better when they are smaller but those have just been pulled to bits by the hail.”

He said it was concerning on top of the dry weather affecting Pukekohe.

“It’s a little bit disappointing because prices were easing. But there is the good vegetables out there at good prices, if you look for those that are on special, but today’s news was a real kick in the shins for growers.”

Murphy hoped other regions could help fill the produce gap.

“What we are seeing is good supplies coming on (from other regions) … hopefully that fills the gap nicely. Hopefully our growers are back on their feet quickly. We are pretty resilient. So even talking to people today in Horowhenua, they are talking about the crops that are still good there – and they’ll be doing everything to get them out.

One finds these articles by accident because they never make the headlines. Often, like with this, I have to go looking

Vegetable growers in Auckland’s rural south say drought conditions are playing havoc with their day-to-day operations and will only add to increased prices for consumers.

Pukekohe vegetable grower Colin Sue says unusually dry conditions over the last couple of years have made it a challenging time for those in the industry and is leading to high prices for consumers. Photo: LDR

It follows the Ministry of Primary Industries (MPI) declaring the drought a “medium-scale adverse event” in south Auckland and the Waikato on Monday, along with a support package for affected farmers and growers.

South Auckland’s horticulture industry is centred on the Pukekohe Hub, 4359 hectares of some of New Zealand’s most fertile and productive land.

According to Auckland Council’s Climate Action Framework released in 2019 it generates $327 million a year, which is the equivalent of 26 percent of NZ’s total domestic value of vegetable production.

Colin Sue is a market gardener in Pukekohe. His company, Set Sue, has been run as a family business since 1968 and grows a range of vegetables.

He said the unusually dry conditions over the past couple of years made it a challenging time for those in the industry.

According to Auckland Council’s Climate Action Framework released in 2019 the Pukekohe Hub generates $327 million a year, which is the equivalent of 26 per cent of NZ’s total domestic value of vegetable production. Photo: LDR

The ongoing drought meant his crops now needed more irrigation than ever, which added to his overheads, Sue said.

“People aren’t getting the same yields they were expecting because of the dry weather and that is reflected in the prices people are now paying for vegetables, which are sky high.”

But he was trying to remain optimistic.

“Next year we could get a wet season, you just don’t know.”

Jivan Produce director Bharat Jivan said he was concerned about the effects of climate change on the industry.

The Pukekohe-based family business has been operating in the area for the past 60 years and grows potatoes, onions, lettuce, broccoli, cauliflower and pumpkins.

Jivan Produce director Bharat Jivan said he is concerned at the effects of climate change on the industry, with higher temperatures and longer dry periods leading to increased growing costs and declining yields. Photo: LDR

“We’re finding the dry periods with higher temperatures are lasting a lot longer and it’s quite noticeable.”

Irrigation was now more important than ever for growers, he said.

“Whereas, if you spoke to my father, he would tell you they never even used to irrigate.”

But Jivan said there was a limit to how much the public was willing to pay for a sack of spuds.

And growers now had to be more conscious than ever of the changing climate and its impact on what they did, she said.

In a statement the Ministry of Primary Industries (MPI) director of rural communities and farming support Nick Story said there had been a lack of consistent rainfall since the beginning of the year.

The drought in south Auckland and the Waikato over autumn was taking its toll on the region’s primary sector and more support was needed, he said.