Police then began deploying teargas with no warning to the crowd. This led to the Westphalian Times editor herself getting hit with a canister of teargas.

Thousands of Quebecois took to the Montreal streets on Saturday in protest of Premier Legault’s lockdown measures. These measures are strict and include a 8PM curfew for everyone. Exclusive reporting from the Westphalian Times depicts Service de police de la Ville de Montréal pushing and teargassing protestors.

The police were out in full force and used megaphones, warning attendees to socially distance or face fines in the thousands. Eventually, back up arrived and the SPVM began shoving protestors. According to Oakes, one protestor yelled over the intercom, “this is a peaceful protest, you don’t have to do this. People are peaceful here, you’re the violent ones. There’s a woman lying on the ground.”

Police then began deploying teargas with no warning to the crowd. This led to the Westphalian Times editor herself getting hit with a canister of teargas.

The protest is still on-going. The is a breaking story and will be updated as more information comes in. 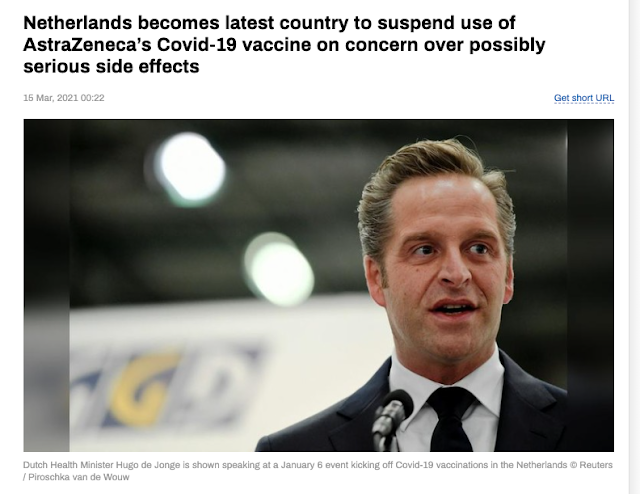 The Netherlands has halted use of AstraZeneca’s Covid-19 vaccine for at least two weeks while an investigation of possibly serious side effects from the jab is undertaken by the European Medicines Agency (EMA).

The precautionary decision to suspend use of the vaccine until at least March 28 was based on new information from Norway and Denmark regarding potentially serious side effects in people who received the inoculation, Dutch Health Minister Hugo de Jonge said on Sunday.

“We can’t allow any doubts about the vaccine,” de Jonge said. “We have to make sure everything is right, so it is wise to pause for now.” Dutch health authorities reportedly had to cancel 43,000 vaccination appointments because of the suspension.

Ireland made the same decision earlier on Sunday, suspending use of the AstraZeneca vaccine after four new cases of people suffering serious blood clotting after receiving the shot were reported in Norway. Denmark stopped offering AstraZeneca vaccine jabs on Thursday after some recipients developed blood clots, and Norway followed suit. 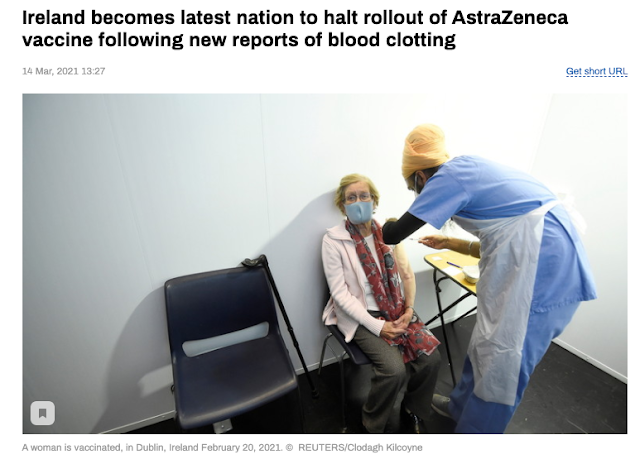 https://www.rt.com/news/518052-copenhagen-lockdown-protest-denmark/
An anti-lockdown group staged a protest in Denmark’s capital to express their solidarity with an activist who was sentenced to two years behind bars for allegedly inciting violence at an earlier demonstration.

Several hundred members of the ‘Men in Black’ anti-lockdown group took to the streets in Copenhagen on Saturday night, lighting red flares and shouting slogans as they moved through the streets. Some demonstrators played bagpipes and pounded on drums, while others carried a large banner reading “black-clad resistance.”

Footage published by RT’s video agency Ruptly shows the demonstrators, many of them dressed in black, launching fireworks into the air as police escorted the crowd. There were no reports of violence and no arrests were made, according to local media.