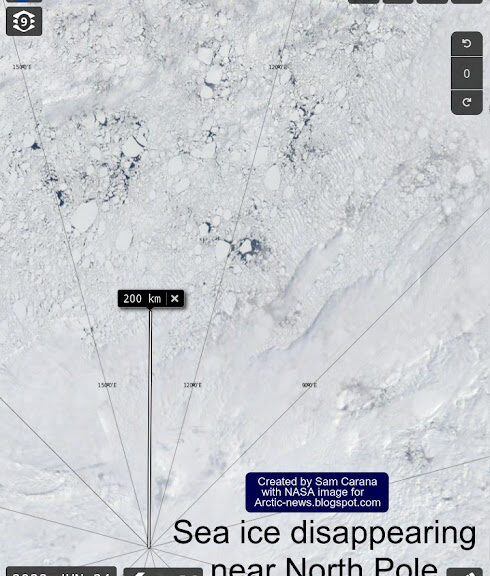 I simply do not have it in me to actively monitor the situation in the Arctic although I am keeping an eye on it.

I continue my policy of only reporting the “what is” and eschewing the mainstream.

Arctic sea ice June 2022 – why the situation is so dangerous 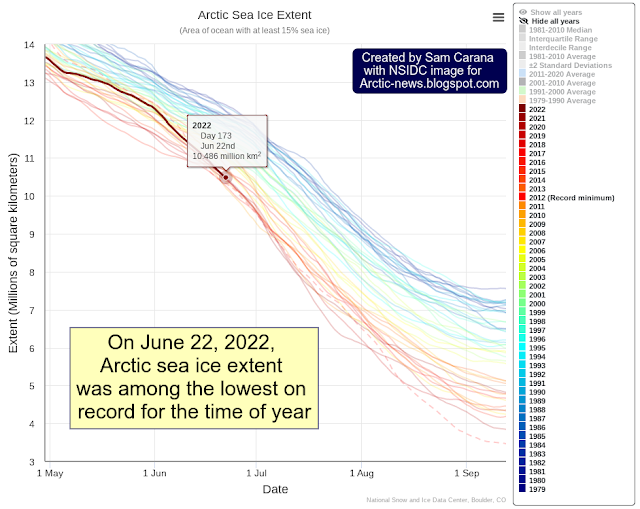 Arctic News,
20 June, 2022
Arctic sea ice extent has fallen strongly in June 2022. On June 22, 2022, Arctic sea ice extent was among the lowest on record for the time of year, as illustrated by the above image, adapted from the National Snow and Ice Data Center (NSIDC Chartic). 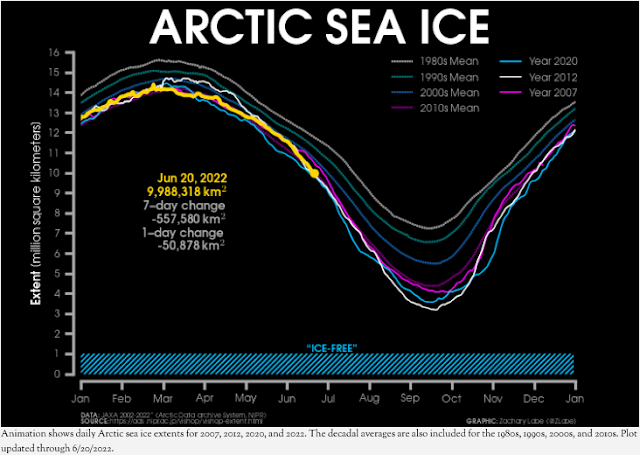 The image below, adapted from Vishop, shows that on June 19, 2022, global sea ice extent was close to a record low for the time of year. 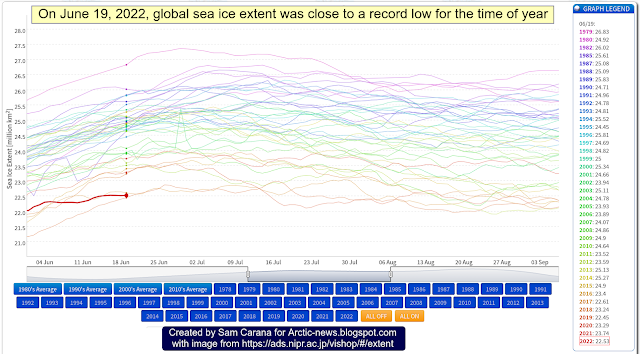 The fact that sea ice is so low for the time of the year is the more striking as we are currently in the depths of a persistent La Niña, which suppresses the temperature rise.

El Niños typically occur every 3 to 5 years, according to NOAA and as also illustrated by the NOAA image below, so the upcoming El Niño can be expected to occur soon.

The NOAA image below indicates that going from the bottom of a La Niña to the peak of an El Niño could make a difference of more than half a degree Celsius (0.5°C or 0.9°F).

Furthermore, the rise in sunspots from May 2020 to July 2025 could make a difference of some 0.15°C (0.27°F). The next El Niño looks set to line up with a high peak in sunspots, in a cataclysmic alignment that could push up the temperature enough to cause dramatic sea ice loss in the Arctic, resulting in runaway temperature rise by 2026.

The NSIDC compilation below illustrates how much multi-year sea ice has already declined over the years. The top panel shows the age of Arctic sea ice for the March 12 to 18 period in (a) 1985 and (b) 2022. The oldest ice, greater than 4 years old, is in red. Plot (c) shows the timeseries from 1985 through 2022 of percent cover of the Arctic Ocean domain (inset, purple region) by different sea ice ages during the March 12 to 18 period. 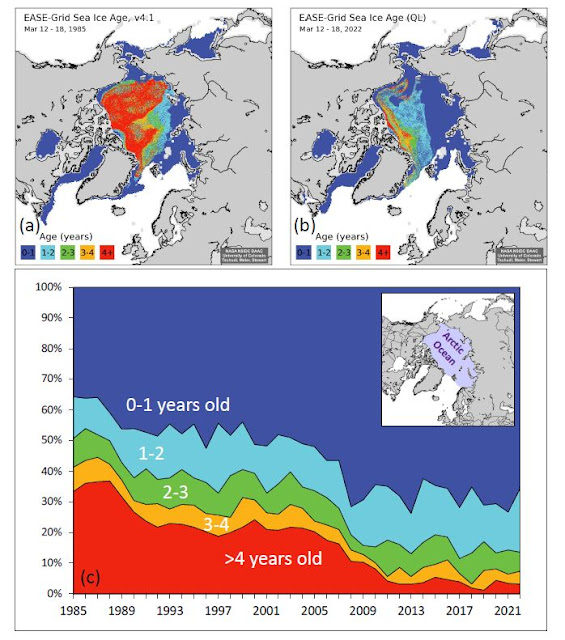 On June 18, 2022, Arctic sea ice volume was among the lowest on record for the time of year, as illustrated by the image below, adapted from Polarportal. 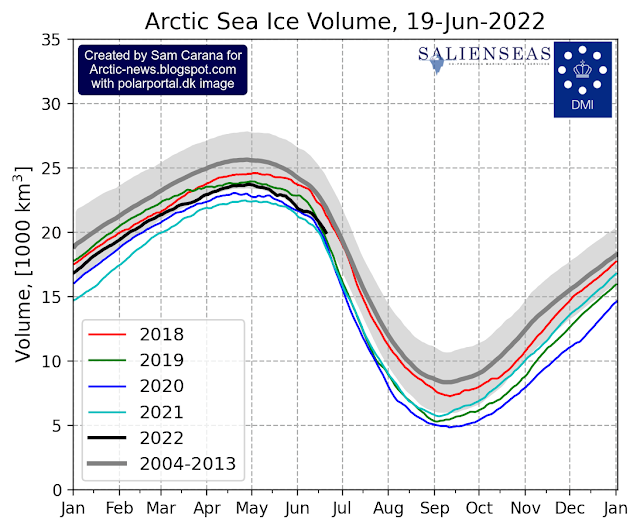 The Naval Research Laboratory one-month animation below shows Arctic sea ice thickness up to June 18, 2022, with 8 days of forecasts added.

The animation shows a dramatic fall in sea ice thickness over a large area, while sea ice is disappearing altogether in some places. This fall in thickness is mostly due to warm water from the Atlantic Ocean that is melting the sea ice hanging underneath the surface. This is where the sea ice constitutes the latent heat buffer, consuming incoming heat in the process of melting.
The University of Bremen image below also shows sea ice thickness, on June 23, 2022. The image shows a large area near the North Pole where sea ice is less than 20 cm thick. 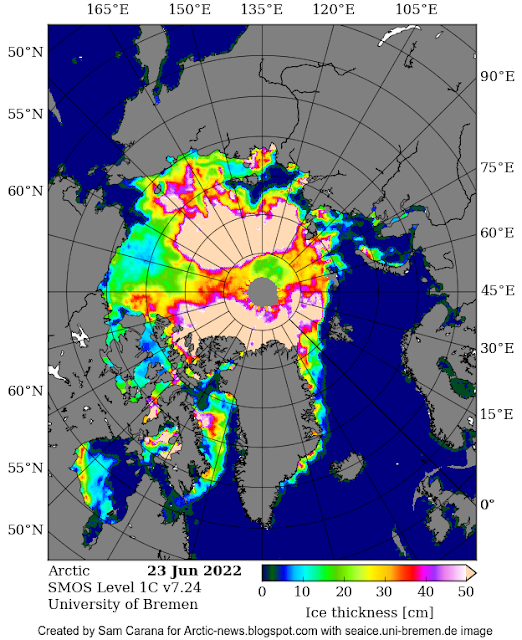 The NASA Worldview image below shows the situation on June 24, 2022. Plenty of water is showing up as close as 200 km to the North Pole. 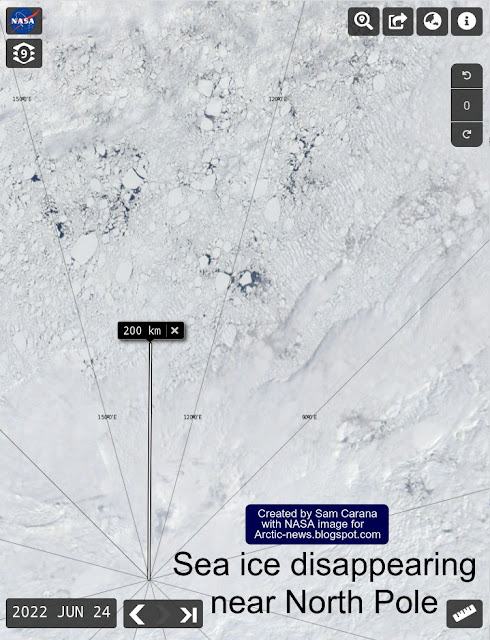 Close to the coast of Siberia, where much of the sea ice has disappeared altogether, the decline is due for a large part to warm water from rivers flowing into the Arctic Ocean. 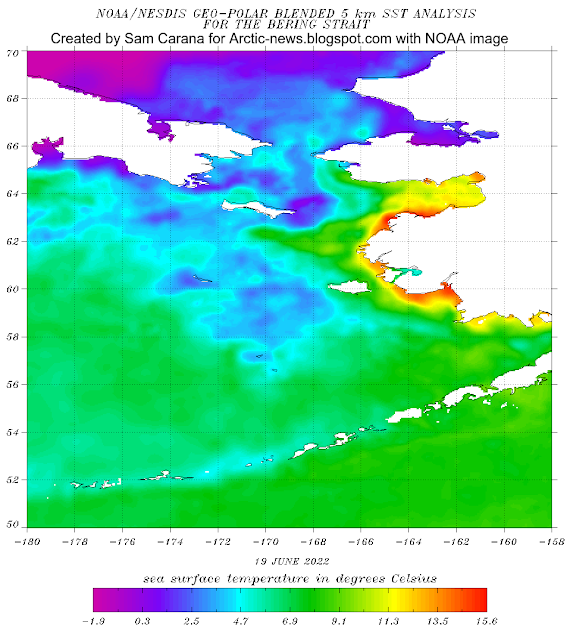 Sea ice has disappeared altogether in the Bering Strait, for a great part due to warm water from rivers in Alaska, especially the Yukon River, the Kuskokwim River and the Copper River, as illustrated by the above NOAA image, which shows sea surface temperatures as high as 15.6°C or 60.08°F. The NOAA image below illustrates how the Gulf Stream is pushing warm water toward the Arctic, with sea surface temperatures in the North Atlantic reaching as high as 32.1°C or 89.78°F on June 19, 2022. 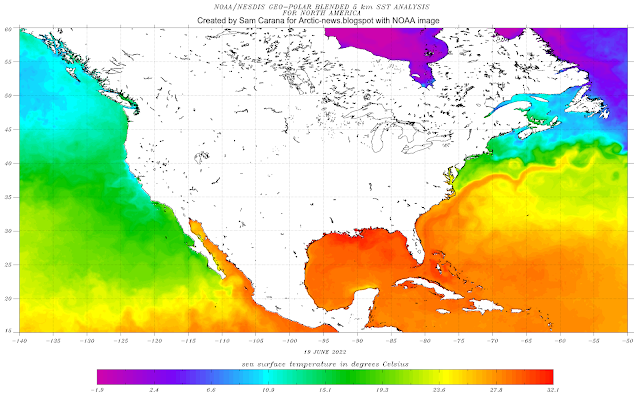 Heatwaves look set to continue on the Northern Hemisphere, extending heat over the Arctic Ocean and thus affecting Arctic sea ice from above, while warm water from rivers will cause more melting at the surface, and while rising ocean heat will continue to cause more melting of the ice underneath the surface. If this continues, we can expect a new record low for sea ice in September 2022 and the joint loss of the latent heat buffer and the loss of albedo will push up temperatures dramatically over the Arctic.

In conclusion, temperatures could rise strongly in the Arctic soon, due to sea ice loss in combination with an upcoming El Niño and a peak in sunspots, with the potential to drive humans extinct as early as in 2025, while temperatures would continue to skyrocket in 2026, making it in many respects rather futile to speculate about what will happen beyond 2026. At the same time, the right thing to do now is to help avoid the worst things from happening, through comprehensive and effective action as described in the Climate Plan.
Links• NSIDC – Charctic
https://nsidc.org/arct…/charctic-interactive-sea-ice-graph

• NSIDC – Springtime in the Arctic
https://nsidc.org/arcticseaicenews/2022/05/springtime-in-the-arctic